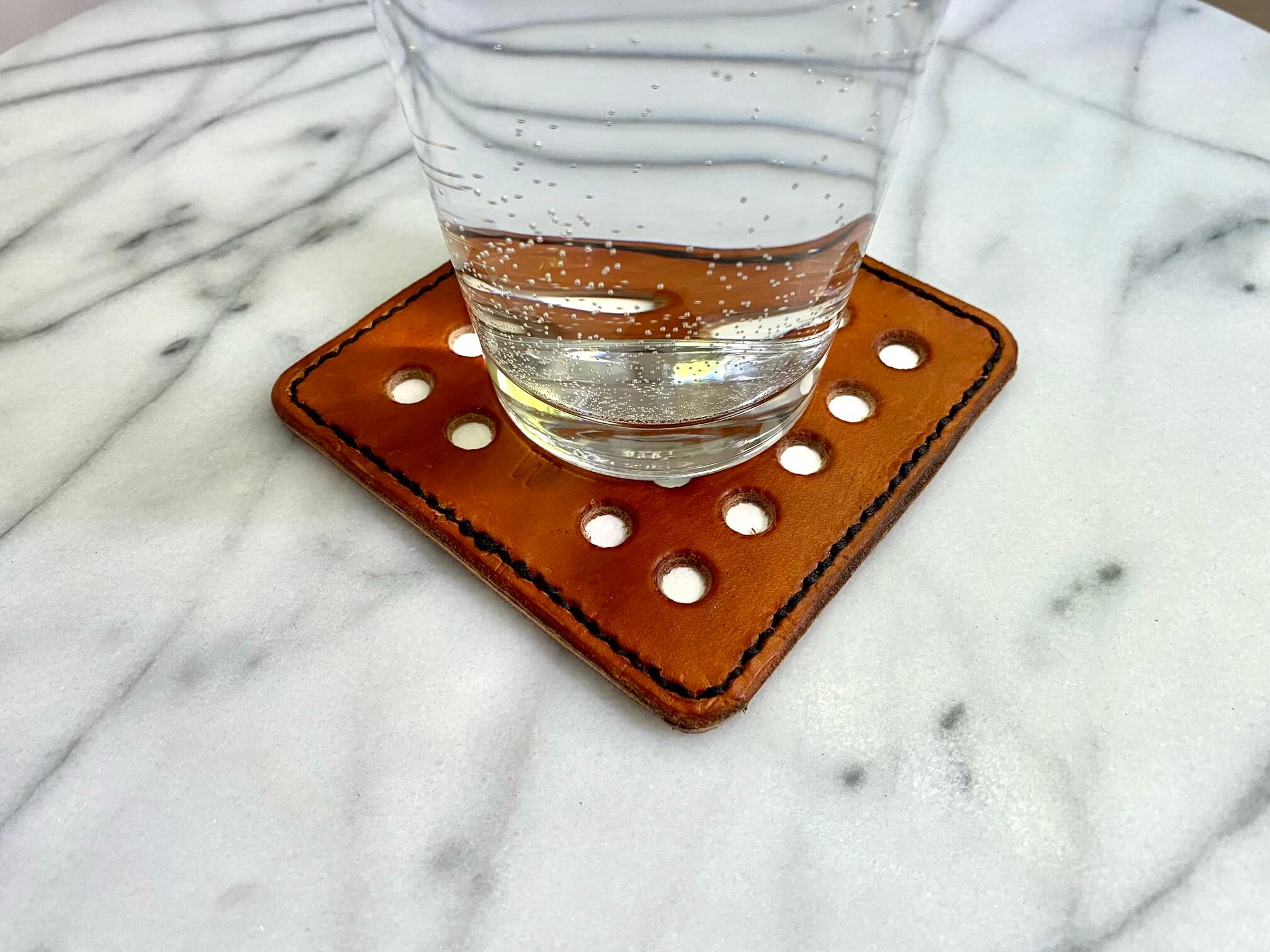 A few months ago I reported that ace DIYer Wafflebored was retiring from making jerseys. As I wrote at the time, “While it’s a shame that Wafflebored will no longer be making jerseys, I have no doubts that he’ll find new creative projects. I’m excited to see what they turn out to be.” Sure enough, Wafflebored contacted me a few days ago and let me know about some new projects he’s been working on.

Leather crafters often make coasters, but they’re waxed and would shed water. I really feel coasters should be absorbent like the thick paperboard ones you would get in a bar. So I came up with this design where the white plastic board normally found in the old goalie blockers is replaced by a blotting paper insert. The idea is you would wax the leather exactly as you would do with your old blocker to keep it waterproof, but hopefully the moisture would bead off into the holes and be absorbed.  The insert is replaceable once it’s used up. 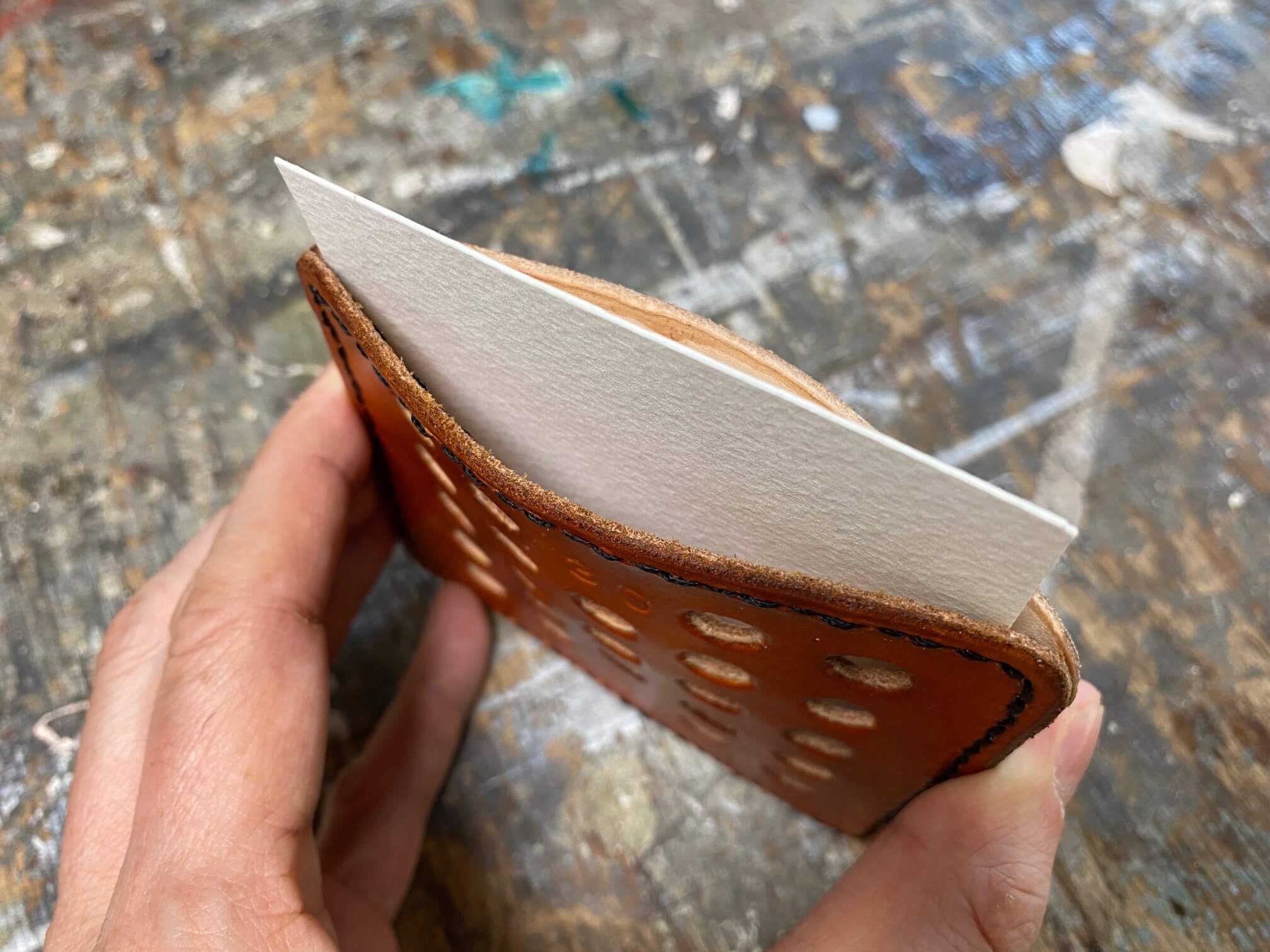 Just as with your blocker, you’d need to re-waterproof it every so often, so it’s a nice interactive feature and exactly what you would have done back in the day as a leather-era goalie.

I love that! A very clever design, plus it’s great when Wafflebored lives up to his namesake.

Next up is this key tag patterned after an untucked basketball jersey (like the ones made famous by Marquette): 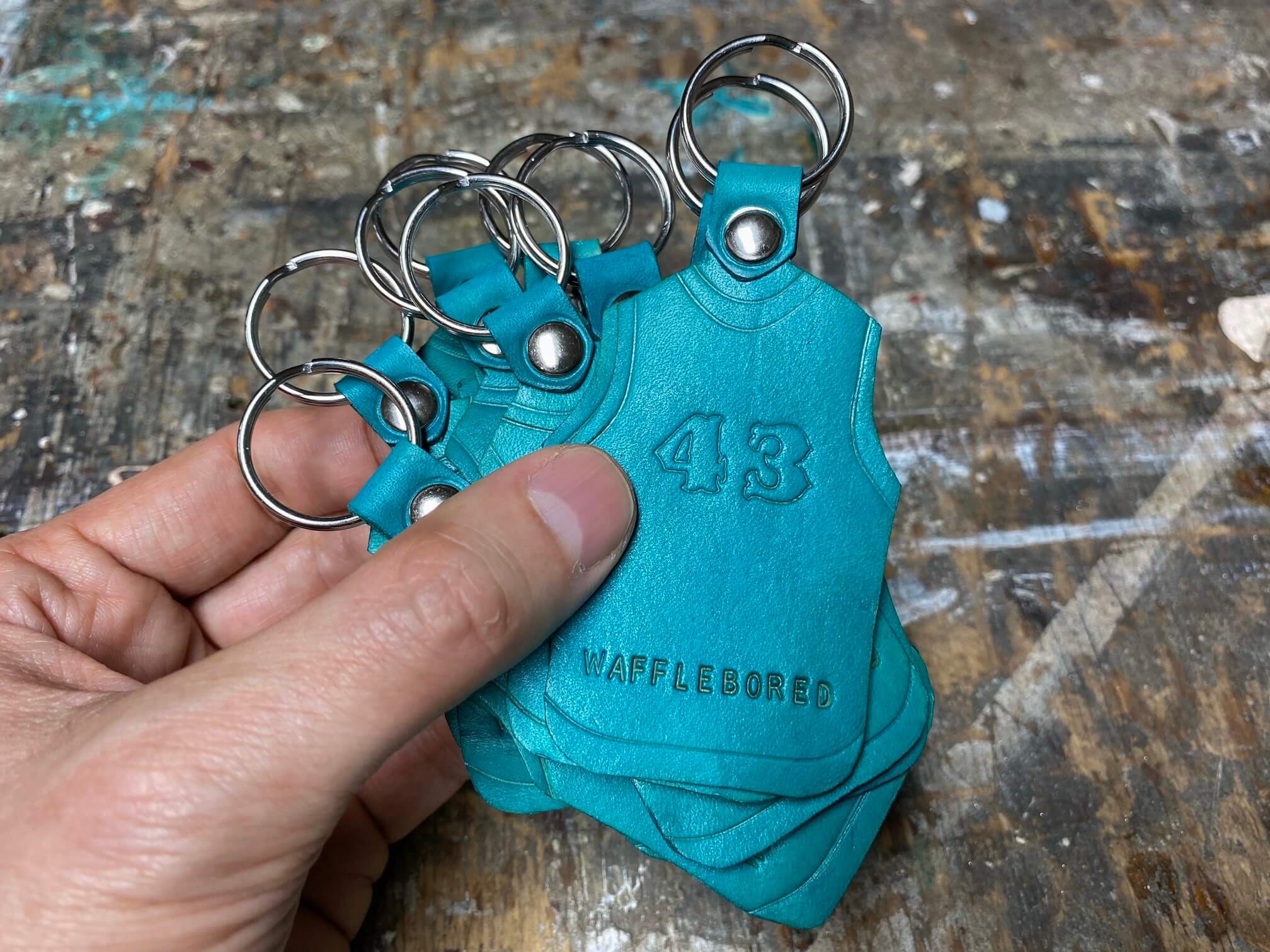 “I absolutely love untucked basketball jerseys, so I made a set of these key rings,” says Wafflebored. “The color is Vancouver Grizzlies-style turquoise.”

And here’s another key ring project, this time based on an old-timey baseball jersey: 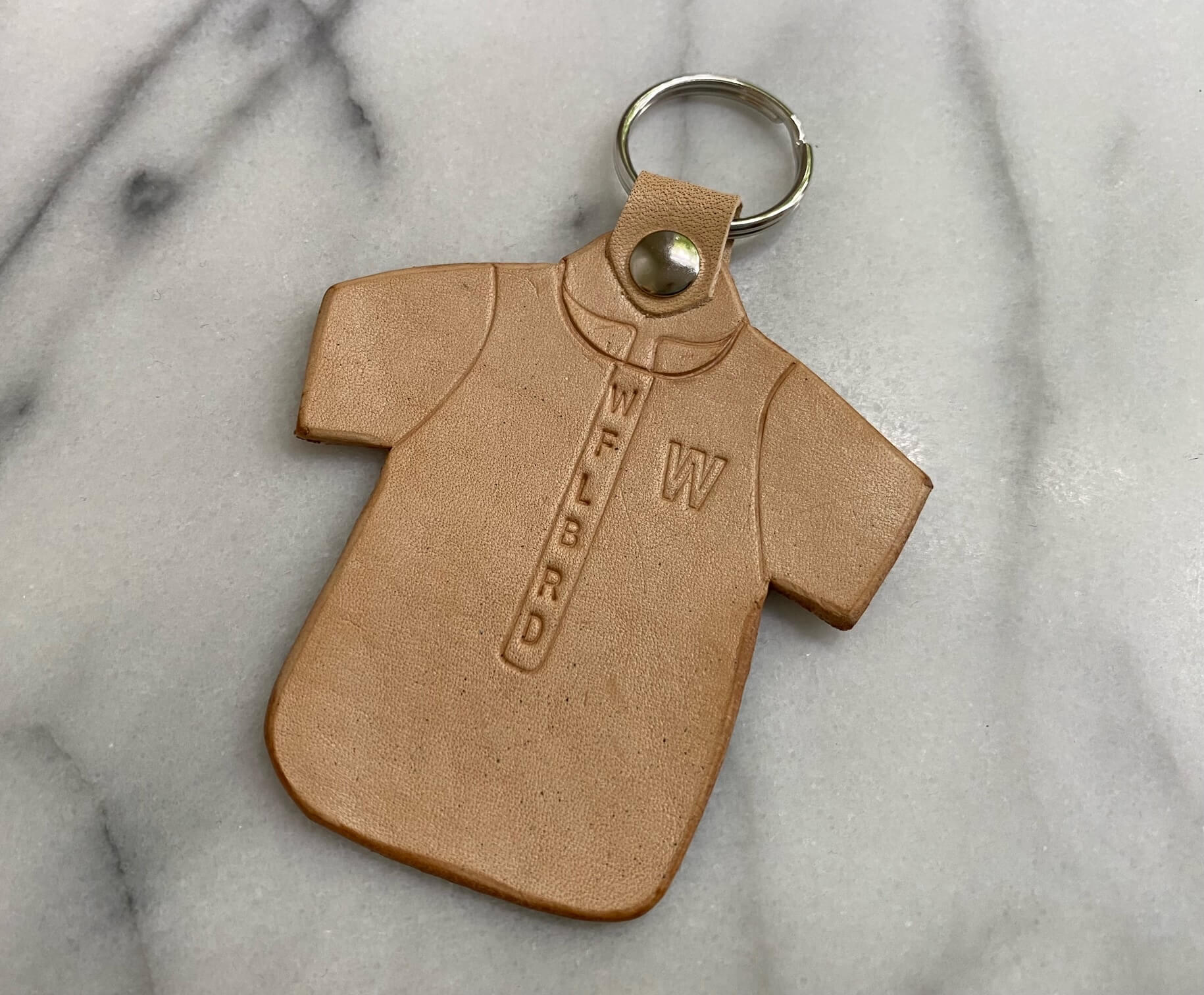 “I love those old baseball jerseys with the name down the placket,” says Wafflebored. “This one is a prototype, but the idea is it would be customizable with any name up to six characters. Still working out how to do that.”

Great stuff. I love that Wafflebored is transitioning from fabric to leather, and I’m super-thankful to him for sharing his fantastic creativity with us. Very inspiring! Keep doing what you do, buddy.

Bulletin reminder: In case you missed it, yesterday was the 23rd anniversary of the very first Uni Watch column being published, so my latest piece for Bulletin is a list of 23 fun facts, previously untold stories, and behind-the-scenes tidbits about Uni Watch, including quite a few anecdotes about my time at ESPN. My Premium Subscribers can read the article here. If you haven’t yet subscribed, you can do that here (you’ll need a Facebook account in order to pay). Don’t have or want a Facebook account? Email me for workaround info. 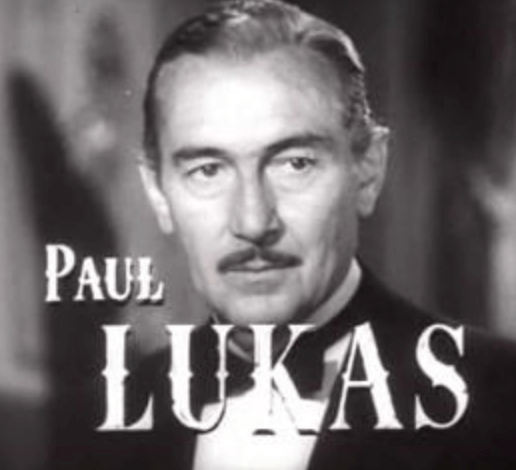 Also, speaking of Uni Watch’s 23rd birthday: As many of you may know, there was once a Hollywood actor named Paul Lukas. I’ve known about him pretty much since I was old enough to write my name, and I’ve even written about him here on Uni Watch, but somehow I never noticed that he was born on May 26, 1894.

Or to put it another way, Paul Lukas and Uni Watch share a birthday. Incredible!

It turns out that reader/commenter Denver Gregg pointed this out back in 2017, but somehow I forgot that. But then reader/commenter Mike Edgerly pointed it out again yesterday. I promise not to forget this time!

(Big thanks to Phil for recalling Denver Gregg’s five-year-old comment. I’m glad one of us remembered!) 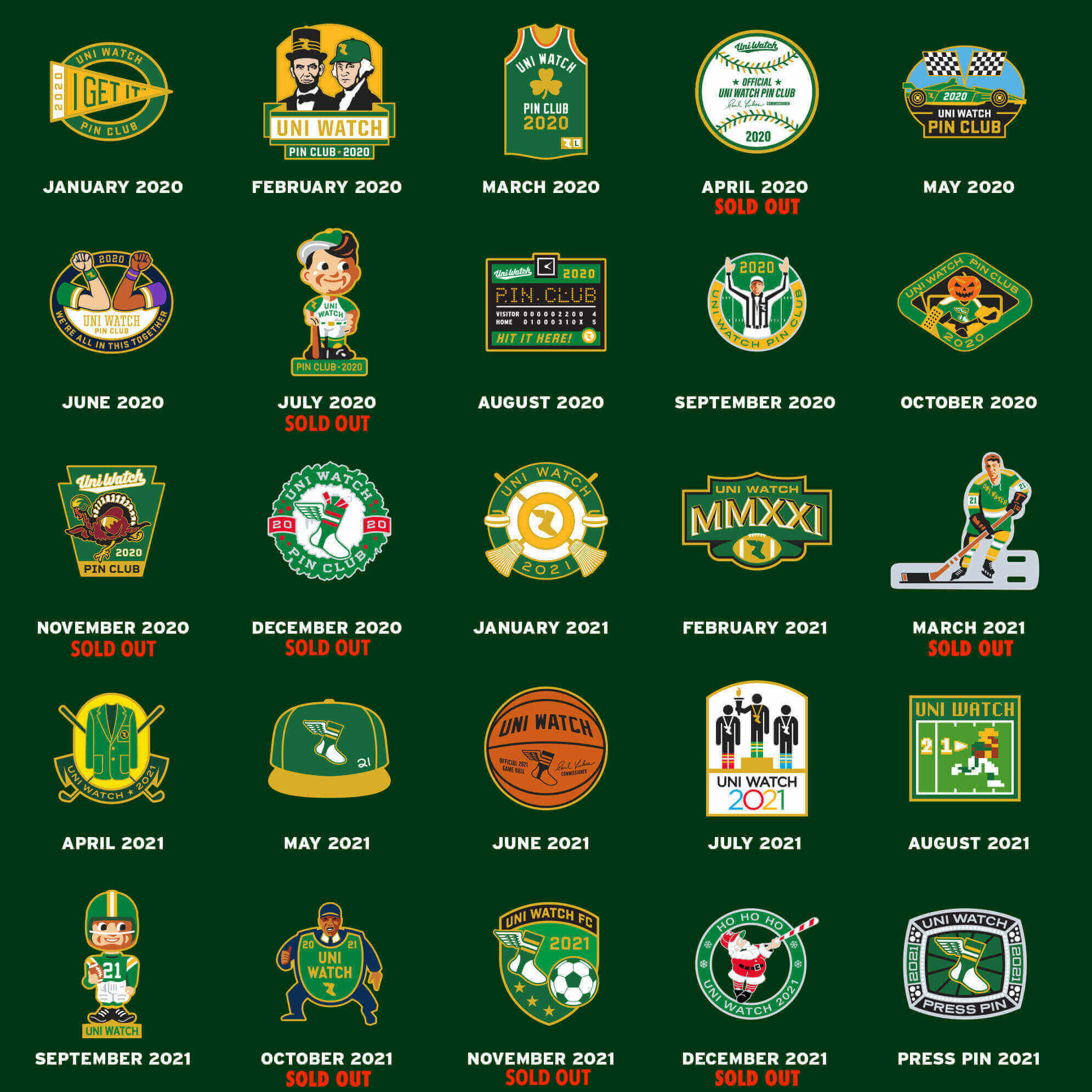 Baseball News: The Rockies apparently plan to unveil their CC uniform today. Phil will have a full assessment tomorrow. … Oh man, check out these amazing jackets the Cardinals are wearing in this 1970s spring training pic found by Paul Gardner. Perhaps even more interesting, it doesn’t look like they’re wearing baseball pants — can anyone shed more light? … At the 1:03 mark of this video, Reds 1B Joey Votto discusses his uniform choices with Dan Patrick (from Tim Dunn). … Red Sox manager Alex Cora started this season sporting a beard. After the team got off to a tepid start, he shaved, and since then the team has started winning.

NFL News: Here’s some great color footage of AFL action between the Jets and Pats at Fenway in 1965 (from Shawn Hairston).

Hockey News: The Flames’ AHL affiliate in Stockton, Calif., is relocating to Calgary in the offseason, and this blog explores some potential names for the relocated team.

That’s it for this week, as we move into the Memorial Day weekend. If you’re traveling over the next few days, travel safe. If you’ll be mourning a fallen service member on Monday, please accept my sincere condolences. Meanwhile, enjoy Phil’s weekend content and I’ll see you back here next week. Peace. — Paul

RE: (The other) famous Paul Lukas

My name is the real name of folk legend Johnny Appleseed. I know a LOT about this man I’m only connected to by name too!

I must be thinking too much about Uni Watch lately, because I had a dream last night that Paul asked me to go to the Mets’ stadium to pick up something for him. Keith Hernandez had offered to give his championship ring to Paul. I came to an office and waited a few minutes until the game ended, and Keith came back from the broadcast booth. He took off the ring, signed a paper authenticating it, and gave it to an attendant. The attendant brought it to me, but told me I needed Paul’s phone number to verify that I was authorized to pick it up for him. I realized I only had Paul’s email address. But then my alarm went off, waking me up, so that was the end of it.

I read your Paul Lukas story when it was first posted but I just read it again, and read the comments. I find names fascinating, so I love reading about them. I share my (first and last name, same spelling) with an older gentleman who lives in Chicago, a woman who is the same age as me who lives in San Francisco and was in the same college sorority as people I knew in elementary and middle school, and a woman about ten years older than me who lived in my area when I lived in Georgia. Apparently, we went to the same spa to get our eyebrows waxed, and more than once they put my record under her name (different middle initial) and vice versa. I always had to specify my middle initial whenever I went to check in.

Also, a few weeks ago I went to a restaurant and put my name on the waiting list. I saw that the young man at the podium was having trouble spelling my name even though I spelled it aloud for him. So I said “Lindsay, you know, like Lindsay Lohan” (why I said this and assumed that people know how to spell Lindsay Lohan’s name, I do not know). And he just said “I have no idea who that is.” And then I realized that this guy who looks like a full-grown adult was not even born until a few years after the height of Lindsay Lohan’s fame/infamy. The first time I ever felt old (I’m 31).

The spring training photo of a clean shaven Al Hrabosky is almost surely from 1977, Vern Rapp’s debut as manager. I don’t have any solid references aside from memories as a youth, but Rapp came in like a house afire, determined to make his mark on the team that Red Schoendienst had managed for the previous decade. Grooming requirements and a conditioning regimen were put in place. And there you have the result: a grim looking Hrabosky in gym pants contemplating his upcoming trade to the Royals just to get away from Rapp and regrow his fu manchu. Seems to me that the photo has been in the ticker before, but my Google-fu has failed me.

They’re…strange, I guess. But that’s the point of these. I do think I like the hats.

The hat looks like a trucker’s hat. Other than that not a bad design.

Those are actually pretty cool.

With Calgary’s AHL team moving to Calgary, that will be the 3rd team playing in the Saddledome. As the Flames already share the ice w/ the WHL’s Calgary Hitmen

I love Wafflebored’s stuff. He’s got both the creative vision for interesting projects as well as the technical competence to pull it off. I’ll miss his jerseys, but I look forward to his next projects in leather.

CF Montreal have their new logo, and it is a big improvement.

The Calgary AHL team really should be called the Sparks.

And if Wafflebored starts making those coasters for sale, I’m in.