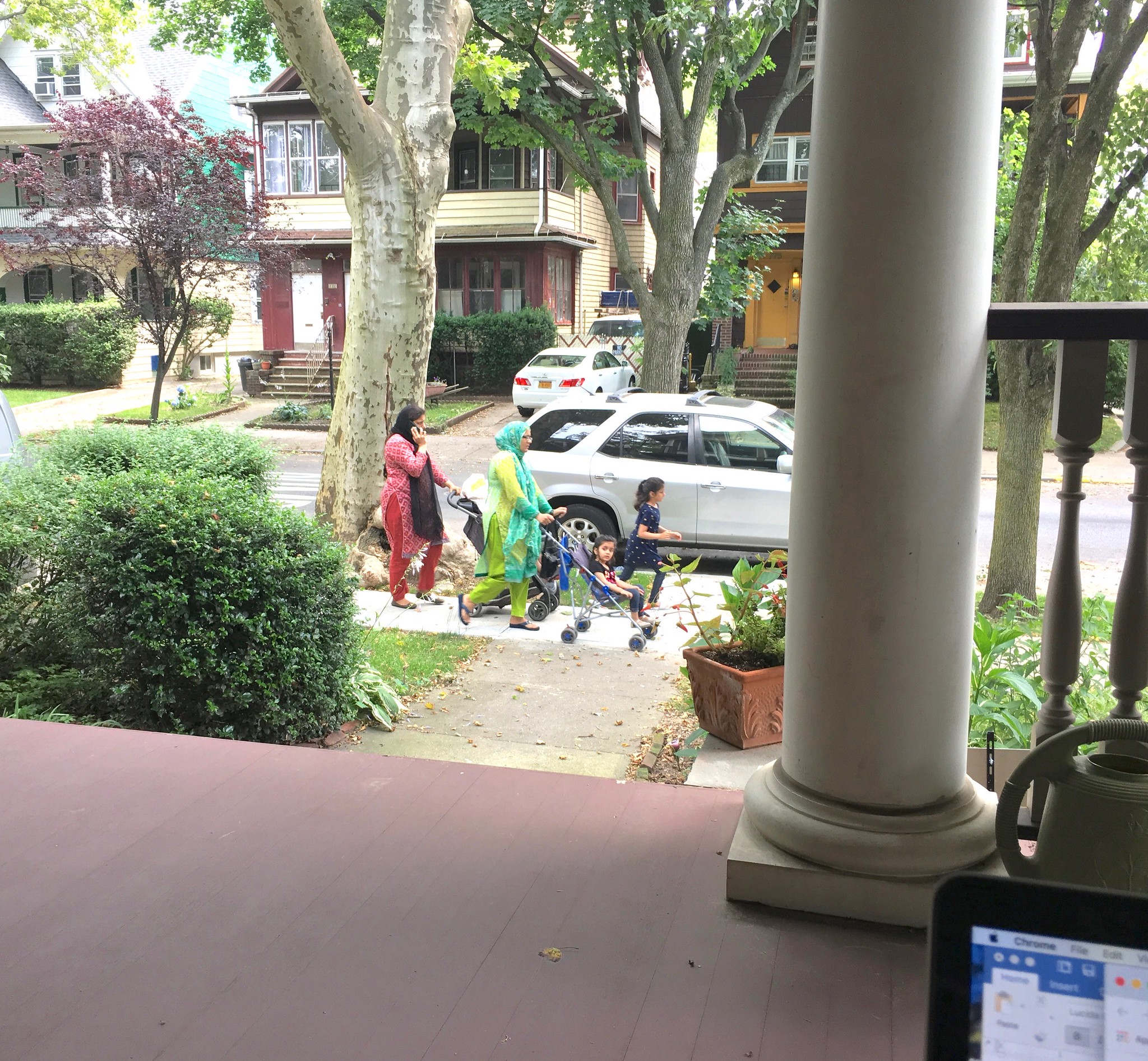 Click for a better view of that completely adorable little girl

As I’ve mentioned a few times now, my porch is by far my favorite thing about the new Uni Watch HQ. The porch has become my office — I sit out there every day with my phone and laptop, doing all my usual work (including writing these words that you’re reading right now). If it’s particularly warm, I bring a fan. The only down side is that I spend less time with Uni Watch girl mascot Caitlin, but I try to make it up to her when I go back inside. I’m thinking of getting her a harness and seeing if she wants to join me on the porch, although she might be too old to be that adaptable. We’ll see.

Anyway: One of the many wonderful things about working on the porch is that I feel much more connected to my neighborhood than I’ve felt in any other place I’ve ever lived. And what a neighborhood it is — the area where I now live is unusually diverse, even by NYC standards, with lots of Pakistanis, Orthodox and Hasidic Jews, African Americans, Latinos, Indians, Caribbeans, Middle Easterners, East Asians. There’s even a Mormon church! (We periodically see the missionaries walking around with their nametags.) I see all of them, and more, as they walk past our house.

In some ways, they’re all very different — from me and from each other. But in other ways, they’re pretty much the same: The adults chatter on their phones; the boys dribble basketballs; the girls giggle and make outsize expressions of surprise as they whisper things to each other; the teen-agers furtively smoke and try to look tough; the couples hold hands and gaze at each other as they walk.

So on a day when I make an annual habit of presenting “America in a nutshell,” it’s hard to think of a better example than this melting pot that I get to see from the porch. It’s a fantastic thing to watch. At a time when so many things out there are so chaotic and upsetting, these families make me hopeful about America’s future.

I wish a happy Independence Day to one and all. I’ll be busy today, but the comments are open, so feel free to chat among yourselves. If you have a few minutes, I heartily recommend reading the Declaration of Independence, whose ratification is what we’re celebrating today. Here’s a typeset version, in case you can’t decipher the handwriting.

If you’re traveling today, travel safe. If you’re playing with pyrotechnics, don’t pull a Jason Pierre-Paul. If you’re working, thanks for keeping the world spinning while the rest of us get to enjoy a day off. And if you’re spending the day in the company of a Britisher (I don’t think we have any of them in my neighborhood, at least not that I’m aware of), kindly pass along my annual Independence Day rallying cry: In your face, Redcoats!

My favorite so far.

Happy 4th of July! I usually don’t post, but wanted to today to tell Paul and his team what an amazing site he has! As a dad of 2 young kids, I’m up early every day and always take time to read Uni Watch. I grew up loving the 1970s style mlb uniforms and I am enjoying the resurgence of them. I’m sure many Uni Watchers saw Max Scherzer warming up in the old Expos uniforms the Nats will be wearing on Saturday. I love those old Expos uniforms, however I have mixed emotions about the Nats wearing them. Different team name, different city. The Nats distanced themselves from the Expos from the beginning. In my opinion, I think the only thing that would make work is if they wore them playing the Blue Jays in Toronto.

Love those uniforms. Man, thinking they would look good on a full time basis if the Tampa Bay Rays could get out of the stadium lease and shovels were in the ground at Peel Basin in Montreal.

I prefer mine medium, with a dab of Heinz 57.

Paul, are you the type that waves or says hello/good morning when out on the porch? I live on a dead end street so I never see any new faces!

Happy 4th of July. I love the job you are doing representing all things uniform related. I remember a uniform worn my Marquette University as a kid. I swear it was Blue with green and yellow zigzag stripes down the side. I’ve searched and I can’t find images of it. Do you have any? I know it was before the “Untucked” uniforms. Thank you.

High cuffed vs. pajama pants was a thing back then:

Happy Independence Day to all!!

Great picture, Paul! Thanks for a moment of hope and encouragement at a time when many of us in this country could really use it. As it always has been, it’s the people – and our collective view of ourselves and our fellow citizens – who make this country what it is.

I pray that we all take to heart the enduring words of perhaps our greatest American, Abraham Lincoln, as he said in his second inaugural address:

With malice toward none; with charity for all; with firmness in the right, as God gives us to see the right, let us strive on to finish the work we are in; to bind up the nation’s wounds; to care for him who shall have borne the battle, and for his widow, and his orphan—to do all which may achieve and cherish a just and lasting peace among ourselves, and with all nations.

Happy Independence Day, everyone! May we all strive, individually and together, to make America that place that Lincoln envisioned it to be.

well said. too many folks these days – on both sides of the aisle – have turned that into “with malice toward all; with charity toward none”

Happy 4th from Northern California. Love your window to the world. Are front porches on a busy street fun, or what?

I really need a porch.

Happy 4th to you Paul and everyone else. I enjoy this website more than I can tell you. I recently went through a medical issue that saw me go through a series of blood tests, X-rays, cat-scans and eventually surgery. I think all of us should be greatful for the great medical facilities in this country as opposed to some of the other places in the world. Never never take them or the people who staff them for granted. Some times it takes a scare to make you realize how great they really are. All in all everything worked out and I’ll be enjoying this day with my family and hopefully watching a little baseball later on. Thanks again for the site and all who contribute to it. And if you see someone from Great Britain today tell them what I always tell them (sarcastically) “Sorry about that incident with the tea”.

With so much in this country to be pessimistic about at the moment (and plenty of things that I am extremely unhappy with), this was a refreshing bit of optimism that reminded me why this country, despite its many past and present faults, is worth celebrating. Maybe not as excitedly and unabashedly as many people do, but there is cause for celebration.

Great post and very well said! Happy 4th of July to all!

On a uni related note, the fact that MLB has made the hats this year throwbacks has made for a inconsistent uniform day of all-day baseball (though I still love all-day baseball no matter the unis). The red and navy hats are cool, but the font and time period differences (the Nats having different W’s on the hat and chest being the most annoying I’ve seen) has been one of those things that I can’t stop looking at and analyzing once seen.

Small complaint in the grand scheme of things today, but there ya go. Happy 4th again!