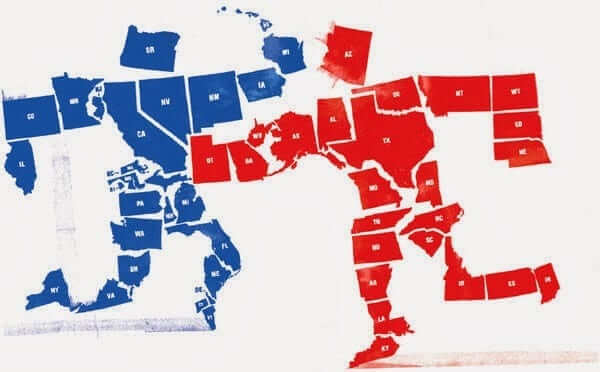 Each year on this date I try to find and present a photo or illustration that captures America in a nutshell (here are the ones from 2017, 2016, 2015, 2014, 2013, 2012, 2011, 2010, 2009, and 2008). This year’s installment should be pretty self-explanatory. The red/blue state assignments don’t all match up with the most recent national election, but the basic concept — a nation at war with itself, thanks to competing political factions — seems sadly accurate. Yes, that’s a depressing thought, but it appears to be where we are at the present moment. Honestly, I spent more hours than I’d like to admit looking for something else — anything else — to use for today’s image, but nothing else felt quite as appropriate.

All of that said, it’s still Independence Day, whoo-hoo! Here’s hoping yours is a good one. I’ll be busy today, but the comments are open, so feel free to chat amongst yourselves (but let’s please not have any red- or blue-state advocacy, thanks).

If you have a few minutes, I heartily recommend that you read the Declaration of Independence, whose ratification is what we’re celebrating today. Here’s a typeset version, in case you can’t decipher the handwriting.

If you’re traveling today, travel safe. If you’re playing with pyrotechnics, don’t pull a Jason Pierre-Paul. If you’re working (as our own Alex Hider is, at his day job), thanks for keeping the world spinning while the rest of us get to enjoy a day off. And if you’re spending the day in the company of a Britisher, kindly pass along my annual Independence Day rallying cry: In your face, Redcoats!

Classic Lukasian move: type something like this > ” a nation at war with itself, thanks to competing political factions — seems sadly accurate. Yes, that’s a depressing thought, but it appears to be where we are at the present moment.” and then tell the readers “no red or blue state advocacy in the comments”!

Well i came here to watch unis and since i dont see any, toodles!

It is one thing to note that there is a conflict, which is a simple matter of observation. It’s another to *take sides* in that conflict, which tends to degenerate into the type of nasty bickering that I’d prefer to avoid here on the site, especially on a holiday.

Surely you can grasp that distinction, yes?

It angers me how much I let comments like UncleSam’s anger me.
Think, man.
And that goes for both of us.

If you can’t see someone reference the existence of a political divide without feeling like you have to immediately advocate for your faction, you should probably just stay away from blogs about sports uniforms

I never liked the red state / blue state designation so I never bothered to learn which is which.

Same here. I am my own man and never felt entrenched by groupthink or labels. As the great Lou Reed sang – “You got an issue? Here’s a tissue.”

Do you have where this image came from? It’s a good one.

It appears on many web pages about red/blue conflict, but I have not been able to ascertain its original use, or the identity of the artist/designer/etc.

Thanks for the link to the Declaration, it has been a while since I read it. Despite our differences, we as a people have much in common. I still hold out hope that our great country can fulfill the promise of the Declaration’s wise words. Happy 4th to all and let’s spend the day in the pursuit of happiness.

May I point out that Colorado is often referred to as a Purple state, as it’s politically not too polarized, and moderate candidates form either party generally do well in statewide elections. Also, I should mention that the Rockies’ uniform colors were directly inspired by “America The Beautiful” (Purple mountains majesty) so maybe we should all weat that color as a sign of unity today. C’mon, Paul, you’re with me, right?

I was thinking that even Paul would be behind the purple movement which seems to have stalled lately. He’s right: today’s illustration is depressingly spot on.

Anyway, enough of that. Even though I’ll probably be listening to English cricket later I’ll be thinking of America while I do. Happy 4th, fellow countryfolk, a Happy Wednesday to the rest of you!

Fun song to listen to today: 4th of July by Shooter Jennings. (He is the son of Waylon Jennings.)

I think the topic has been discussed here before,but I remember as a kid that the TV networks did not have a uniform color designation for elections. One channel had them one way and another had them reversed.

Yeah, I remember that as well. Feels like it wasn’t that long ago, honestly. Maybe 2000 with Bush’s first election?

The red/blue state designations was designed by one of Bill Clinton’s campaign people during his reelection bid. They would use it in meetings to look at what states they thought they had and what states tge Republicans had.

Red was chosen for Republicans because of the association to Communism to put them towards that bad color.

From this the colors stuck into broadcast. Also, most broadcasters will wear purple ties on election day to show bipartisanship.

I feel like I watched a documentary within the past year or two that essentially said that was the first election to standardize the colors… prior to that, the networks (and newspapers, and textbooks, I suppose) more or less did their own thing.

Blue was used for the incumbent party in elections. The 2000 election is what brought the whole red state blue state nonsense into Vogue.

LA Angels uniforms were bad last night. Could not read the letters or numbers on the red jerseys from a distance.

I came here today to see therm comments on the awful angels unis last night. Got politics instead.

I hate politics…love sports. Thanks for nothing Paul for injecting this into a uni-watch blog. Please don’t do this again …w all due respect I don’t need you to remind me of the country being polarized.
That said… I’m a big fan and will be back tomorrow

The red and blue distinction is flipped around in Canada, the Conservatives are always Blue, the Liberals red, and the New Democractic party, who are left of the Liberals are orange. There has never been a New Democratic Prime Minister.

We also have green (Green) and lighter blue (Bloc).

I’m really happy that the Hummel chevrons have been placed on the sides rather than the sleeves of the traditional blue jersey.

The “mandarin orange” third kit is nearly an exact replica of the very popular 2002/03 kit that the Gers wore while winning their seventh domestic treble.

And the fact that the color of it will wind up rival Celtic supporters is a wee bonus. :)

Sadly people now root for their political party affiliation like they do for their favorite football team. It’s been very liberating for me when I became an independent, and will criticize and compliment both sides. However I find this a difficult position, since “friends” from both sides get upset with me for criticizing or liking things that go against their dogma. Also it seems that everyone has a “thing”. One issue that they are passionate about that s a deal breaker for them. I do think 24 cable news and constant internet reporting, from both sides, has fueled this divide.

If you consistently piss off both sides, then you’re doing something right.

Haha…true. I’ll add that we’re all working with limited information. I’ve been passionate about something in the past, and then find out I was an idiot about it.

I always remember Red is Republican. I think they went that way so it is easy to remember, but it was not always so. Here is a good write-up about the red and blue usage:

“So depending on the election or the network, red and blue were variously assigned to Democrats and Republicans. On election night in 1980, when it became clear that Ronald Reagan was going to defeat Jimmy Carter, a television anchor pointed to the color-coded studio map showing the emerging Republican victory and said it was starting to look like “a suburban swimming pool.”

But after the 2000 presidential election, no Republican victory of whatever size would ever again be described using the color blue. That year, the networks had chosen red to represent states won by the Republicans and blue to represent states won by the Democrats. However, by the end of Election Night, neither George W. Bush nor Al Gore had a definitive electoral majority to turn the country red or blue.”

Washington’s Farewell Address predicts the state of our Union, especially paragraph 22. At one time, it was read more frequently than the Declaration on the Fourth, but has slowly become more ignored, much to our detriment.

What a wise man. Probably wouldn’t be elected today.

I’m familiar with this, but can find no collaboration that shows that this was “read more frequently than the Declaration on the Fourth”.

What team is playing?

Different ways of thinking or voting isn’t bothersome, that’s the way it has always been and should always be.

What is truly craven are those who fuel and foment conflict just to enrich themselves.

Best of them all is the Sunday Cream and Royal Blue.

2. I actually love the ART that Paul posted today, which is pretty accurate but not really the “problem”. The “PROBLEM are people that have turned elections and politics and policy decisions into a Blood Sport.. This posting by Paul is ART, and it is a pretty clever use of State shapes to confect a pretty clever piece of ART. Love it!.

4. I happen to LOVE Purple, and I understand that several states are claimed to be Purple States, but it really doesn’t fit THIS piece of ART, and because Paul very famously does not like Purple, and because this is NOT Purple Amnesty Week, Paul need not torture himself with including any posting in Purple this wonderful day,

5. Now that you’ve gotten me started, I am not going to spend the next two hours watching early 1970’s TCU football and basketball home game highlights on YouTube in order to get MY own personal light Purple/Violet UniWatch-ing Color Fixx.