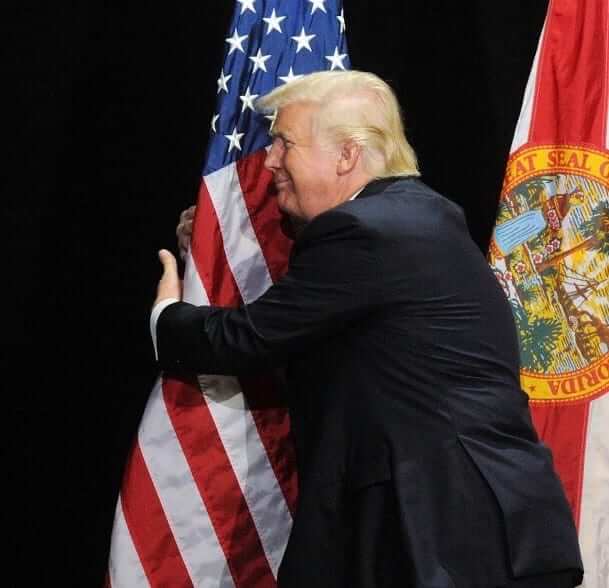 Each year on this date I try to find and present a photo or illustration that captures America in a nutshell (here are the ones from 2016, 2015, 2014, 2013, 2012, 2011, 2010, 2009, and 2008). What I like about this year’s entry — a photo of Donald Trump hugging a flag at a campaign event in Tampa a little over a year ago — is its versatility. If you like Trump, the photo shows his admirable love of country; if you hate Trump, the photo shows his penchant for absurd behavior. Either way, the photo seems like an apt snapshot of America at this point in time, and the divergent reactions to it capture our unfortunate state of polarization.

Anyway: Everyone have a great holiday. I’ll be busy today, but the comments are open, so feel free to chat amongst yourselves (but let’s please not have any pro- or anti-Trump speechifying, thanks).

If you have a few minutes, I heartily recommend that you read the Declaration of Independence, whose ratification is what we’re celebrating today. (Here’s typeset version, in case you can’t decipher Jefferson’s handwriting.)

And if you’re spending the day in the company of a Britisher, kindly pass along my annual Independence Day rallying cry: In your face, Redcoats!

To the American readership and Paul and all the crew at Uni watch. Please enjoy and have a safe Independence Day. As a Canadian I am proud to have your country as a neighbour, and my personal belief is let’s celebrate our differences and the ability to be proud of one another regardless of religion, socio-economic status or political stripe. In the end none of us get out of here alive so let’s make it fun and aesthetically pleasing, and for the love of all that is sacred let’s petition the removal of holiday uniforms in baseball.

Re: holiday uniforms in baseball. Ronald McDonald was seen around town wearing 2 left socks from the S&S uniforms.

That’s not Thomas Jefferson’s handwriting. The signing draft of the Declaration was definitely not written by Jefferson, and most likely was drafted by brewer and patriot Timothy Matlack. And while the engrossed handwritten copy is what we think of today as the real or original Declaration, it was actually promulgated on July 4, 1776 in this printed form: link

The fancy-handwriting version wasn’t created until late July or August of 1776. It was basically Congress’s souvenir copy.

Well said, S.. As a fellow Canuck, I second all of that.

Thanks for including all of the previous photos and illustrations that capture America. My favorite year is still the first, 2008, which reflects an array of some of our most damaging products; fireworks, guns, ham, and cigarettes.

The 2008 sign is advertising BB guns. Or perhaps the U in ‘guns’ is umlauted, in which case the America-ness of the sign/photo takes a hit.

I will continue to post this Gumby video every 4th. I realize very few (if any) have watched in years past. Their mistake.

Mexican American Grocers Association? I support them as well D!

Happy 4th all. I’m going to go have my celebratory anus burger!

Happy Independence Day! Seeing you are from Blue Point why don’t you ever write about eating at Flo’s?

I really enjoy the site. I got hooked on it about a year ago. I have to say however your “capture America in a nutshell” pictures are pretty disappointing. You think a man in his underpants cooking on grill shaped like a gun or a supermarket display of beer captures America in a nutshell? Really?

I’m not sure if I should be sad that you see America in that way or rather I should be sceptical that you really want to make a political statement.

Great site but your yearly thinly veiled political statements disguised as “humor” or cleverness could use a little more optimism.

If your biggest complaint about the site is that you don’t like a couple of photos I posted several years before you even started showing up here, I’m not too concerned. If those photos somehow diminish or interfere with your enjoyment of the site, that’s a pity. But I’d like to think we’ll both find a way to move on.

That’s a little over supplication don’t you think? You make your thoughts about America known publicly,every year on the 4th of July, by choosing photos which you say “capture America in a nutshell.” Then you choose photos that show the American flag in beer display or a drawing of a fat Captain America holding a Big Gulp.

I’m calling you out. Your yearly pictures aren’t cute or clever. What they are is cowardly. If you have something you really want to say about America, then show the courage of your convictions and say it.

Then we can all have a discussion about your ideas. When we are done I’ll take a photo of that… And let that be my “America in a nutshell.”