The Bears got a penalty for trying to dry the field with a towel in order to kick a field goal. pic.twitter.com/Jv2A2na6zk

Hello, and welcome to the first Monday Morning Uni Watch report of the 2022 NFL season. Let’s start in Chicago, where the Bears were hit with a really unusual unsportsmanlike conduct penalty during a very rainy game after their kicker and holder tried to dry off the spot of a field goal attempt with a towel (which, it turns out, is not allowed). You can see the taboo toweling taking place above, and then here’s the ref announcing the penalty:

The Bears really got a unsportsmanlike conduct penalty for wiping down the field with a towel 💀
pic.twitter.com/diIK3om4ng

I found some good additional info in this postgame article, as follows:

“You’re allowed to use a towel to dry your hands and I just wanted to flatten the spot, so I just grabbed [holder Trenton Gill’s] towel and did it myself,” [Bears kicker Cairo] Santos said. “The referee called him, but it was really my responsibility.”

Santos said he didn’t know he did anything wrong. The NFL rulebook doesn’t allow players to move snow with a towel, but it doesn’t specifically say that for rain or water.

“You cannot bring what we consider a foreign object — this was not a towel that would go on a uniform — out to alter the playing surface,” referee Clay Martin said. “We felt that provided an unfair advantage.”

At the time, the penalty appeared to loom large because it pushed Chicago out of field goal range and forced them to punt, but they ended up winning the game anyway, so the “Towel Play” will likely become more trivial than notorious. (You can see lots of photos of the very rainy conditions here.)

In other news from around the league yesterday:

Looks like Jalen Hurts changed his cleats at one point. pic.twitter.com/vQnABYjBGh

And there we go, with our first MMUW of the season in the books!

(My thanks to Mike Chamernik and Michael Hochman for their contributions to this section.)

Who’s that looking sharp in the nicely bloused pants and picture-perfect stirrups? None other than Jack Gillis, the seven-year-old son of longtime Uni Watch reader Austin Gillis. Looks like you’re raising him right, Austin — well done! 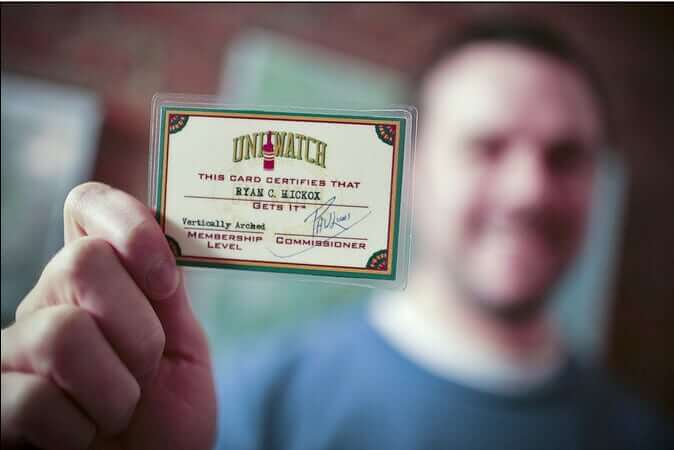 Reader Sam Selker has generously donated funds for both a membership card and a Bulletin subscription, with the stipulation that he’d like people to enter only if they’re students or financially strapped. (Obviously, we’re doing this on the honor system.) We’re going to do the membership card today.

This will be a one-day raffle. No geographical entry restrictions. To enter, send an email to the raffle in-box by 9pm tonight. I’ll announce the winner tomorrow.

Speaking of raffles, our latest winner is Amy Marantino, who’s won herself a year’s worth of my Bulletin articles. Congrats to her, and thanks to Colin Quinton for sponsoring that one.

Does anyone notice that the Chargers’ bolt is in three different color combinations in that uniform set? Helmet, shoulder, and pants are all different.

Was watching RedZone and said to my 11 year old son about how good that Raiders/Chargers game looked.

Said 11 year old is playing fall-ball, so I naturally had to get him some color-matched stirrups. Local sporting goods store didn’t have them, but surprisingly Dicks did! I show up to his first game (after leaving work to get there) and his right stirrup is already hanging out of the back of his cleat!

The Ravens memorial decal says “Goose” and “Jaylon.” That’s a nickname and a first name, not surnames.

Take that pic of little Jack and post it in every MLB clubhouse. THAT’S how you wear a baseball uniform. Perfection.

Plus his posture looks like it would be perfect in a dugout, too!

I’ve been scouring the Ravens website for any closeups of the memorial decal. No luck yet.

It seems really surprising that they haven’t promoted it.

Love that the Chargers went with that combo for the opener…hadn’t they gone all-white for first home games in years prior?

Unpopular opinion, but I cannot stand that Chargers’ look. To me white helmets with dark jerseys need to be balanced out with white pants, or else it makes the uniform bottom heavy. The three different color elements look more like a hodgepodge of various uniforms rather than one cohesive design.

I’m a big fan of pants matching helmets, or a third party color that goes with/matches/contrasts both jerseys. The Eagles silver in the 80s, the Packers yellow, Rams yellow, Steelers yellow, the Raiders silver. The Saints all black, Cardinals all red, and Pats all blue are terrible. Saints in gold pants (with helmet stripe) are excellent.

Very disappointing news out of Montreal this morning…

Way ahead of ya, Shawn:
link

Regarding the Sept 11th sticker, fells very much like a generic patriotism design than anything memorializing the events of that day. There are plenty of Twin Towers / Pentagon designs to use. Wonder if with Sept 11 we are slowly wading into Memorial Day territory where for the masses the true, somber meaning of the day will be lost to generic patriotism. I attended a “memorial event” in my town yesterday and sadly seemed to be drifting towards a generic patriotism and public service event. There was an upbeat rah rah version of “Proud to be an American” sung, an award was given and the day named for a firefighter in town who had nothing to do with the response of Sept 11, and they actually laid flowers for deceased members of the Sept 11 committee who created the memorial statue. I was sort of in awe at how much time the ceremony focused on Americans coming together to overcome problems, and supporting current public service members, than actually reading any of the countless accounts of bravery or loss on that day. I watch the Welles Crowther story every year on Sept 11 and it always moves me to tears.

I hope those aren’t baseball spikes or cleats on those hardwood floors.

Kudos for the 9/11 memorial decal not being complete flag desecration.

The Vikings appeared to be wearing all white socks at home. I have not noticed that look before at home when wearing the purple tops.

The Texans decal was for the mass shooting at Robb Elementary School in Uvalde, not Uvalde High School.

Thank you for that correction, Howie. Now fixed!

Jack Gillis already Gets It(TM) at severn years old. I have no doubt he will soon be running this place.

Were the Bucs’ black masks a new thing? They looked great…

Is it me or are the sock shenanigans worse than ever? Seemed like there was so many teams / players opting for solid white socks/tights yesterday. Off the top of my head the Texans, Panthers and Jaguars all opted for white hosiery instead of their usual colored socks. It’s such a horrible look.

Vikings, too. Not my favorite, I agree.

I worked with Anthony Varvarro, a Port Authority Police Officer who passed away yesterday in a car accident while he was on his way to work at the World Trade Center for the memorial service. He happened to be a former major league pitcher for the Braves and Red Sox. There have been a few memorial logos that came out yesterday with his shield and jersey number that were pretty nicely done. Didn’t know if you happened to see it.

the Panthers lack of blue wasn’t really a bad look at all, I love Carolina/baby blue hues but the minized look was sharp!

And from tonight, can we host a burning party for those ugly Seahawks unis? Please?