[Editor’s Note: In the wake of the death of Queen Elizabeth II yesterday afternoon, our own Anthony Emerson has done an outstanding job compiling the UK sports world’s reaction to her passing. — PL]

The death of Queen Elizabeth II, who served for 70 years as the monarch of the United Kingdom and 14 other nations, rippled through the British sports world yesterday (including at at Old Trafford, shown above, where Manchester United players observed a minute of silence prior to their Europa League match against Real Sociedad). Here’s a look at how some of those ripples played out.

Defending Scottish champions Celtic FC, a club with deep ties to both Irish and Scottish nationalism as well as left-wing and republican political movements, only acknowledged the Queen’s passing with a one-sentence statement on the club’s website. They did not make any aesthetic changes on social media, nor did they post a link to the statement. Rangers — Celtic’s crosstown rivals and a club traditionally associated with Scottish unionism and British patriotism — changed their social media avatar to a black-and-white version of the team’s logo and changed their header image to a photograph of all the flags flying at half-staff at Ibrox Stadium. The club also made multiple statements on Twitter, with one depicting a portrait of the Queen hung in Ibrox Stadium and another announcing the lowering of the Union Flag to half-staff at the stadium.

Aberdeen FC, another Scottish Premiership side, did not change their social media avatars but did tweet a statement of condolence with a black-and-white club crest attached. The news of the Queen’s death broke during Heart of Midlothian’s Europa Conference League match against İstanbul Başakşehir, with a minute’s silence being observed before the second-half kickoff. Players and officials came out of the dressing room wearing black armbands.

In Northern Ireland, most clubs released statements and changed their social media avatars to black-and-white. One exception was Cliftonville FC, a club closely associated with Irish nationalists. Their only acknowledgement was a brief tweet saying that the league had postponed the club’s Friday-night match due to the Queen’s passing.

BBC presenters wore black suits and ties after rumors of the Queen’s health began circling at around noon UK time. Following the announcement of the Queen’s death, the UK’s major political parties changed their social media avatars to black-and-white. However, nationalist parties such as the Scottish National Party, Sinn Féin, the Social Democratic and Labour Party, and the Scottish Greens retained their usual logos. One exception was the Welsh nationalist party Plaid Cymru, which, similar to other entities, adopted a black-and-white logo. Keir Starmer, the leader of the UK’s Labour Party, tweeted a statement and changed his social media icon to black. Other organizations, from universities to fast food restaurants, similarly removed color from their logos.

In Canada, the Vancouver Canadiens — a High-A minor league baseball team affiliated with the Blue Jays — put maple leafs and the queen’s silhouette behind the catcher’s box:

Other Canadian and Commonwealth teams presumably had memorials of their own. If you know of any, feel free to share them in today’s comments.

All of the Rams wore the same social justice message — “Choose Love” — on their neck bumpers for last night’s NFL season opener against the Bills. More info on that here.

Aside from that, I didn’t notice anything uni-notable in last night’s game (well, aside from the Rams wearing white at home and Bills inexplicably going blue over blue). As already noted in my NFL Season Preview, the Rams opted not to wear a “Super Bowl Champions” patch, making them the third straight defending champs to skip the patch (the Bucs didn’t wear one last year, and neither did KC the year before that). The last defending champs to wear such a patch? The Patriots in 2019.

(Thanks to Phil for the article about the Rams’ neck bumpers.) 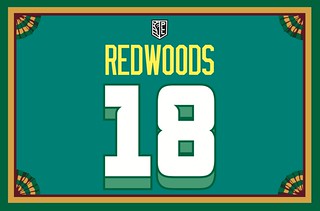 Longtime reader Jared Buccola guest-wrote our Premier Lacrosse League Season Preview a few months back and has also been contributing PLL items to the Ticker. Now he’s put his money where his keyboard is by ordering a membership card based on the PLL’s Redwoods Lacrosse Club. Love the green-on-green design!

Ordering a membership card is a good way to support Uni Watch, and fun to boot. And remember, a Uni Watch membership card entitles you to a 15% discount on any of the merchandise in the Uni Watch, Uni Rock, and Naming Wrongs shops. (If you’re an existing member and would like to have the discount code, email me and I’ll hook you up.)

As always, you can sign up for your own custom-designed card here, you can see all the cards we’ve designed so far here (now more than 3,300 of them!), and you can see how we produce the cards here.

Reader Colin Quinton has generously donated a Bulletin subscription for me to raffle off. The lucky winner will receive a year’s worth of my Bulletin articles via email.

This will be a one-day raffle. No entry restrictions. To enter, send an email to the raffle in-box by 9pm Eastern tonight. One entry per person. I’ll announce the winner on Monday. Good luck, and thanks to Colin for sponsoring this one!

We’ve now completed our first week of Uni Watch Plus. Personally, I’m really pleased with how things have gone so far — we’ve had no major tech glitches, the payment system is working fine, people are using the discussion forum, people tell me they like the ad-free site experience, and it’s great to see the little UW+ badge accompanying so many of the comments. Big thanks to all of you who’ve signed up during this first week!

A few people have asked how many people have gotten on board. As of this morning, we have 270 UW+ enrollees. That’s a good start, but I’d love to do better than that — a lot better. If you enjoy Uni Watch and have the means to help support it, I respectfully ask that you please consider joining UW+. (Want to learn more about UW+? More info is available here.)

Thanks for listening, and for your support of Uni Watch — it’s greatly appreciated.

Did my bi-monthly blood donation yesterday. After they remove the leeches take out the needle, they apply some gauze and wrap it with an elastic bandage, which comes in a variety of colors. Usually they just grab whichever color is at the front of the drawer, but yesterday the technician noted my green shirt and went out of her way to use a matching green bandage. Nice!

That shirt, incidentally, was this Uni Watch design from 2017. One of my favorites!

Great job with today’s Lede, Anthony! Definitely impressive how you managed to get so much put together on fairly short notice!

The women’s soccer games were also postponed (along with the men’s games) and some had been scheduled for their equivalent men’s teams’ stadiums which makes those a lot more difficult to reschedule.

I know multiple people tweeted about Man U’s adboards being blacked out yesterday but it was the same for West Ham and Hearts (but the latter only in the second half).

Also, the men’s cycling Tour of Britain was going on this week but the last three stages were canceled. (link)

One other Arsenal note about the Queen. The news broke during Arsenal’s Europa League match with FC Zurich in Switzerland.

Celtic did it right. Just say no to monarchy in any form.

Well, they were saying no to it specifically in English form. If the British Prime Minister died, Celtic might also have a muted response.

And look at all the implications in the other institutional responses in the article. It’s mostly about being English versus being conquered.

Ah, the subtleties of tribalism!

I’m a regular blood donor too, Paul. Nice to hear that your technician “Gets It.” :-) As a lifelong University of Michigan fan, whenever they pull out the red bandage, I tell them, “Sorry, but I’m going to need to request the blue.”

I’m also a regular donor, but I don’t think I’ve ever seen anything other than a red bandage. I might be wrong, I haven’t given as much as I’ve wanted to since the pandemic. (Although I’m helping host a blood drive at my university in November, so I may request ARC only to bring blue to match our school colors)

Nice getting the green wrap. In my experience they only have it sometimes, it is always red, and if they don’t have it you are stuck with the tape which then rips all your arm hair off on removal.

RE: The Rams unis last night. Happened to scroll past some article on former Ram Andrew Whitworth, and the accompanying photo was of him in the LA years white horns with white jersey and pants. As much as the gold-less helmet and pants caused a problem with the gold trimmed white jersey, I actually found it better looking than what the Rams have now. Perhaps because it simply had various elements which look better. All I could thing was, if only they just recolored that set with royal blue and yellow.

At least for the news channels in England, the whole black & white graphics/chyrons I was reading are part of the “Operation London Bridge” in case of her death. They had those ready, and played prerecorded segments to give anchors time to switch to black clothing that was also stashed in case just for this. All the sports teams probably followed the same model with their social media logos.

Is it just me or does Paul’s bandage look more blue than green?

It’s not a perfect match for the green sleeve, but it’s definitely green!

Think it was the colour settings on my monitor. Looks much greener on my phone!

Great job with the lede, Anthony! That’s some great in-depth coverage on the reaction to the Queen’s passing. I particularly appreciated the look into the reactions of teams with ties to movements that don’t necessarily support the monarchy. Very interesting!

I’m only commenting to see the UW+ badge next to my name.

And then today:
The English Premier League postponed all 10 matches scheduled for this upcoming weekend after Queen Elizabeth II, Britain’s longest-reigning monarch, died Thursday at age 96.
EPL officials made the decision Friday morning despite official guidance from the UK government that did not require them to do so. “There is no obligation to cancel or postpone events and sporting fixtures, or close entertainment venues during the National Mourning period,” the guidance states.

The Premier League, in a statement, said it chose to pause its season “to honor [the queen’s] extraordinary life and contribution to the nation, and as a mark of respect.”

Wholly unlike what the NFL did in 1963 when JFK was assassinated.

Not really at all sports related, but in Canada the superior courts of a few provinces changed their names effective immediately.

Anyone who has the title “Queen’s Counsel” gets a new title immediately as well.

The comments on the team’s’ Twitter condolence messages definitely lived down to my expectations.

I subscribed to UW+ today. I gotta say that it is well worth the money. The website is so much easier to navigate without the ads, and you don’t know what you’re missing in the forum. If you’re on the fence I say jump.

Remember the giant portrait of Queen Elizabeth that used to be displayed at old Winnipeg Arena? The new owner of it plans to display it soon.
link

Great lede today. It is very interesting to see the reaction of Scottish, Welsh, and Irish clubs. Many changes in Canada today within the legal community (crown attorneys) and new Canadians swearing allegiance to the king.