Today the Phoenix Suns became the latest team to unveil their “Classic” (throwback) uniform for the upcoming season, and like several other squads, have chosen to return to the 1990s. The “Sunburst” uniform, which was worn from 1992-2000, is marking its 30th Anniversary as well.

The 1992-93 Phoenix team was led by Sir Charles Barkley, and made the trip to the Finals that season, eventually succumbing to the Chicago Bulls. Needless to say, the uniform has proven immensely popular with fans over the ensuing decades, and it seemed like only a matter of time before the team brought it back. Let’s have a look at what they’ll be wearing for the upcoming season. As you can see, it’s pretty faithful to the original (obviously there was no uni ad or makers mark back then). The jersey is purple, with orange and black piping, the classic “SUNS” ambigram, and featuring a basketball inside a “sunburst”. Numbers are slightly oriented upward, in white with a black blockshadow. Pants are also purple, with a black waistband, with an orange/black stripe on the right hem, with an angled orange stripe and black triangular section, featuring “PHOENIX” in orange, on the left.

Here’s a different angle on the shirt. You may be able to notice the numbers contain slight perforations. According to the NBA, “The Suns will wear the uniform throughout the 2022-2023 season and celebrate the 30th anniversary by hosting corresponding 90s nights.”

Here’s one last look at the full uniform: 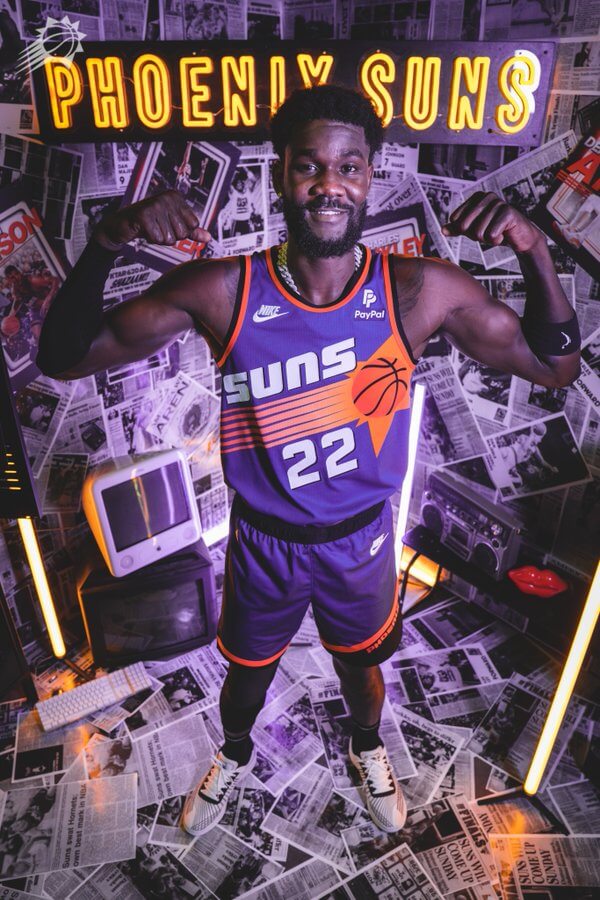 And of course, what better way to “introduce” the new uniforms than with a very 90’s-inspired hype video (unfortunately, we don’t get much better looks at it than the still photos). But there is some good detail in the closeups.

Now THIS is worthy of a comeback

What I think of when I think of “Phoenix Suns”. Reminds me of that feature on Uni Watch several years back, listing each NFL team’s ‘signature look’.

Very interesting that they only had Ayton in the photos and video, especially after they highlighted NBA Jam, a game that famously only allowed duos. I know that with his contract situation and the Indianapolis offer, that he cannot be traded until January 2023 or thereabouts. My guess is the lack of any other star (Booker, CP3, Bridges) shows that everyone was available in KD trade talks, which up until this morning, we a constant possible proposition.

I also noticed that. I’m guessing Booker wasn’t available. Mikal Bridges and Cam Johnson may have made more sense than Ayton, who had one foot out the door all summer.

I was really expecting a sunset photo to accompany this! :)

Hated it then, hate it now.
Oh well, its NBA, I don’t really pay attention to the uniforms anymore, better for the digestion.

You seem to spend a lot of time making negative comments on designs–what are designs that you like?

PayPal. Something I never use. Much like my TV when the NBA is on.

This brings up an interesting question, how many Uni Watchers have intentionally used a product from an NBA advertiser?

It seems that it’s a lot of weird/obscure/old companies that are no longer relevant in today’s world (I’m looking at you Motorola, and PayPal!)

The thing is, I haven’t watched the NBA in years, so the only advertisers I know of are from this website, so maybe there are more out there that are still in mainstream commerce. But from what I’ve seen, it’s a bunch of dud companies trying to get noticed

Uniform ads have done nothing to affect how and where I spend my money. Some companies already had brand awareness (GE, PayPal), and most of the others are tech companies that I have no use for. If anything, I would probably be disinclined to use a company if they came to me through a uniform ad.

The Bucks’ first advertiser was Harley Davidson. Yeah they’re based in Milwaukee, but I can’t think of two more differing groups than Harley riders and NBA diehards.

I am sure advertising people could have an answer for this, but I am wondering what the expected return on various types of ads are? Like what does paypal actually hope to get out of their uni ad? My hunch is a lot of these ads exist for subliminal purposes. Such that it is just like a constant visual of the logo in your daily life. I believe one team has GE ads. So presumably that doesn’t make you go out to buy a GE product. But rather they think the more places they can plaster their logo in daily life, the more their brand just seeps into your subconsciousness, so when it is time to make a purchase in one of their markets, you’ll have some subconscious association with their brand?

My favorite NBA uniform of all time. It bears all of the trademarks of 90s design cliches, but the addition of black to a team whose identity is most fun when it’s space themed works so well to me. It’s become timeless for me and I wish it was the main.

This is my favorite Suns uniform, both in purple or white. Or at least equally my favorite with their 2nd uniform that had western lettering and the half sunburst on the pant legs. I’d love to see them go back to this 90s uniform as the main uniform.

And they had a black version of this uniform in the late 90s that was also pretty great.

This is a close 2nd for me for the best Suns look, after the Walter Davis/Tom Chambers look (western font, sunbursts at the hips). But this would be fine if they went to it more regularly.

Something was familiar about the shorts, and then realized the early 2000s Oklahoma State men’s basketball team had the same diagonal stripe + orange wordmark look on their shorts.

I can understand a lot of people, especially Suns fans who remember that era vivdly, will like this. My reaction back then was: why? I love the western font and the half suns on the shorts, black is not needed. And I still feel the same way now.

You forgot to end your comment with ‘now get off my lawn!’

I have no memory of the western font uniforms, as a kid this was the first Suns look I can remember, and while I am generally against excessive logos and designs on basketball uniforms, this one always seemed to work. Once I did discover the western font design I did think it was a very good look, but I already had bias in my mind that this 90s design was how the Suns should look.
I know they had a black alternate, but my preference would have been for an orange version of this design.

Typo: Ambiagram should be ambigram

A couple of odd things about the hype video:

1. The style of hip hop they’re playing and even the aesthetic of the video (dope boy cell phone, boombox and fat gold chain) is pure 1980’s. This uniform didn’t drop until 92 when the music was sonically different (think east coast boop bap and west coast with heavy synths). This worked for Golden State’s TMC era throwback, but sounds horribly out of place here.

2. Considering how badly DeAndre Ayton wanted out of Phoenix, he seems super chipper in this video. I guess matching his match offer sheet fixed all that.

3. I always thought the white home version of this uni popped better. I guess they’ll run that back next season since nobody invests in an alternate court for a single use.

I always liked this one. This was when Phoenix transitioned from “generic NBA team, with cheesy Western font” to actually having a discernable identity. The ’90s were filled with flashy outrageousness, and this went there but with a simplistic approach that’s easy to draw. The colours were used well, for contrast and decoration, and black is used here as a trim of sorts, bringing out the other colours rather than overwhelming the whole design. I love that sunburst basketball.

I’ve always liked the Suns uniforms. I think that purple/orange is a great combination and under used. However, I felt that they added too much black to this uniform back then and still do. The black works on the ball stripes as well as an outline for the chest script and numerals, where it makes them pop a little more. I would remove it everywhere else. It especially looks out of place on the waist band. I would change that to purple and change the jersey and pants piping to white. These are minor gripes but overall, not too bad of a uniform, considering the decade that spawned it.

When did ‘get off my lawn’ obtain a negative connotation ? Who likes unwanted people on their lawn and why would they be disparaged for asking/telling someone to do so ?