As expected, this morning the Washington Wizards unveiled their “Classic” edition uniform for the upcoming NBA season. The uniform is a throwback to the one worn from 1997-2004, the first uniform the team sported after changing their name from “Bullets” to “Wizards.” If you do the math, this marks the 25th anniversary of the team introducing the new monicker.

Let’s look at some photos: The uniform is the white (formerly “home”) version of the first Wizards uniform, featuring a blue, bronze and black color scheme around the neck and arm hems, with a large blue stripe bordered by thinner bronze and black stripes down the left jersey side panel and continuing down to the left side shorts. At the base of the shorts, the stripe flares out wider, to hold the funky lowercase “dc” logo which was introduced in 1997, on the left panel, while the primary logo appears on the right side of the shorts. At present, the team didn’t provide any photographs of the rear of the uniform, although you can catch some slight glimpses in this hype video:

Nothing beats a classic 📺 pic.twitter.com/E4pPOiRi3A

On the assumption that the new “Classic” edition is as faithful as possible to the 1997-2004 uniform, the back should feature player name and number in blue, with bronze/black outlines, like so: 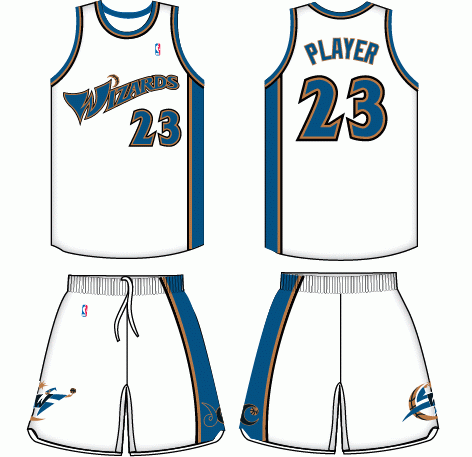 Obviously, the rear will probably have Nike’s truncated stripe pattern, but should otherwise look pretty true to the original.

I never really warmed to the change from the team’s prior red/white/blue color scheme to the blue/bronze/black (and while I understand the team’s rationale for their name change, I wasn’t a fan of “Wizards”). Still, this uniform was beloved by many, and I’m sure fans will be glad to see it return as a “Classic” throwback.

Haaaated when they revealed the name and Uni change. Reminded me of the magical Disney Angels uniforms

It’s got to be one of the worst total rebrands in sports imo. The worst offense is that absolutely atrocious “finger roll wizard” tangrams logo. The next worst offense is that, once they were tired of this look, they fairly quickly transitioned back to the old bullets look with the wizards name subbing in, which makes the name not only silly, but moot, as the current logo package doesn’t lend itself to wizardry much at all (yeah yeah the monument is a magic wand or something…). I appreciate the bullets’ uni aesthetic, but they need to make more adjustments to it so it feels like it fits the name better (and yes I’m also aware that two hands going up for a ball doesn’t say “bullets”, either, but wizards are less fraught in terms of cultural implications so it’d be nice to see a little something more wizardly). Also, the name was a doubly odd choice when Orlando already had the magic.

Will the Capitals be bringing back their matching uniforms?

This was my first thought too

Probably with the Reverse Retro this season

I like how the Wizard’s shamelessly ripped off the Capitals, who changed to this color scheme two years earlier.

Well that’s what happens when the Owner of both teams is the same person.

The Wizards played in the same new arena, the MCI Center which the Capitals played in. The goal of unifying the same colors was not new… the Blackhawks and the Bulls wear red / black / white. The LA Kings, Lakers and Sparks at one time featured purple (Forum Blue), gold and white. It’s one of the most clever ways to have teams share a venue and bring civic pride to those colors. Why would anyone take umbrage? WOW.

Shameless rip-off? Not at all. Same ownership, same colors.

They’re owned by the same corporation.

Missed opportunity for a Bullets throwback! Plenty of Bullets “gear” still being worn outside the Verizon Center.

Other than BULLETS across the chest, I thought current Wizards gear looked like the Bullets?

It makes me feel old to see these marketed as classic. I also kinda forgot John Wall ever even wore these.

He didn’t wear this version. He wore for gold version that came out in 05 for his rookie year only. The RWB rebrand came out before his second season.

The video clearly shows him wearing this version…

Love the color scheme. The tapering of the WIZARDS lettering looks perfect with a two-digit uniform number, but with a one-digit number there’s a lot of empty space

The only time the Wiz ever looked good was when they wore the gold jerseys and black shorts.

Not a fan of the name, either. I can respect the idea of getting away from “Bullets,” but how about Cannonballs, or something historical-ish? Alliteration For Alliteration’s Sake is absolutely annoying.

How about something non-plural. Like DC Granite (homage to the curb/gutter in the District)

Gold jersey and black shorts. A perennial worst uniform design of all time.

I hated everything about the Wizards rebranding, but with a quarter-century of distance, these don’t actually look that bad. It’s a unique colour scheme for the NBA, and it actually looks like a proper basketball uniform, unlike a lot of the shite that Nike have been churning out of late.

You took the words out of my keyboard.

I’m a native of the DC area, and admittedly not much of a pro basketball watcher, but honestly never noticed the asymmetry of the side panels

It was one of the design flaws that made this uniform bad. Also, they shared the same wacky number font with the We Believe era Warriors jerseys.

The proper throwback would be to the old Baltimore Bullets unis.

Ugh. Straight from the thrift store and back again.

Good riddance to this bad rubbish!

no ad patch, so it’s not the worst it could be…

Every time a team brings out an NBA throwback, it makes Nike’s template look even more out of place.
1. Old basketball jerseys had stripes at the collar and around the shoulders. Which are unnecessarily truncated on the Nike template.
2. Old basketball shorts had designs at the hips, and often had stripes at the hem of the shorts. If there was a notch in the middle of the short hem, it was symmetric and at the lateral midpoint of the shorts. Nike’s template has a notch placed obnoxiously far forward, which makes any design at the hip look off.
In some cases, uniform makers adjust templates to make the uniform perform better. Things like the Cool Flex in MLB allow the jersey to breathe. The changes to NFL jerseys allowed players more flexibility and use lighter-weight materials. In theory, these advances make players to be better at their jobs, or at least not overheat while doing their jobs. The 2 key changes in Nike’s templates are the equivalent of The Swoosh: a giant “HEY LOOK AT ME!!!” that does not make the jersey more effective at helping an athlete’s performance, sorta like the old Rawlings batting helmets in the ’80s, with the flat earflaps and weird profile. It gets your attention but not for the right reasons.

The name has never been not bad, but that color scheme of saturated medium blue and bronze with black accents has always seemed the ideal DC colors to me. Outside of DC, people associate Our Nation’s Capital with the red-white-and-blue of the flag. But inside DC, the institutional presence of the national government and our national museums announce themselves more consistently with blue, gold, and bronze. Plus a lot of brown, thanks to the 1970s and 80s, but the blue, gold, and bronze remain predominant. To my eye, the Wizards never quite made the color scheme work as well as the Caps did, but in both cases they’re my personal favorite DC team colors.

The colors worked for the Caps because they were winning games. Simple as that.

The fact that I couldn’t care less shows how oversaturated the NBA merchandise machine is.

There was never a black Wizards uniform from this era. Black and gold was the only alt.

Do you think Swoosh World Headquarters cares about historical accuracy?

Feels like the NBA (and Nike) have created a monster. Multiple jersey sets every single season. That’s starting to happen in MLB and NFL too.
The big problem: Looks like Nike is already running out of ideas (which is going to happen when each team has three or four jerseys year after year). Clearly, they’re all doing it because fans buy this stuff.

Why is Michael Jordan always left off things like this? How are they not gonna show him in the promotional video? I get he wasn’t the same MJ as the Bulls MJ but still a big part of the Wizards history. They don’t even include him on their All-Time Wizards team on 2K

Pretty sure the dispute with ownership which lead to him leaving MCI Center in his convertible to never return is why.

Nothing classic about these

“Still, this uniform was beloved by many, and I’m sure fans will be glad to see it return as a “Classic” throwback.”

Not even close. The Wizards were dead last in merch sales during that period.

You do realize that merchandise sales do not beloved a uniform make.

As a Bullets fan, I can tell you nobody in DC remembers this plain Jane design fondly.

Thanks for correctly noting that this design was worn until 2004. In 05 the gold was swapped in for bronze which popped a lot better despite this design still being lame/ boring.

The 2011 RWB rebrand finally buried this lame set for hood.

I like the color scheme, I like the change away from Bullets (firearms are just not cool) and I like the DC monogram. I even like the slightly Wu-Tang clan like wordmark and the wizard jumping over the moon. But they should have incorporated some of these ingredients into something frah, using the red, white and blue as well. I liked those remix uniforms of last season, especially the one for the Bucks. Just copying something straight from the past is not creative and not attractive, I think. Unless it is a baseball uniform from the 1920s or older.

fresh instead of frah…I will call my mistake a remix as well.

Well… these are certainly from the nineties. The decade of zany uniforms. How about that logo of the wizard performing sorcery with a basketball? Sure, it looks kind of silly, and so does the wordmark on the uniform, but at least they executed a wizard motif of some sort. I liked this colour scheme that the Capitals and Wizards both used at the time…. still do…. it’s unique and the shades of blue and bronze play off each other pretty well. But it was also very jarring for both the colours and the uniforms to change so much. They could have used the old colours and the change would still have been radical. Anyway…. I wish the Wizards would have kept a wizard motif alive somehow, but with better fonts than what we see here.

As Tony Korneiser said, this entire debacle could have been avoided simply by dropping the S from Bullets. A lot of bullets? Problem. One bullet? No biggie.