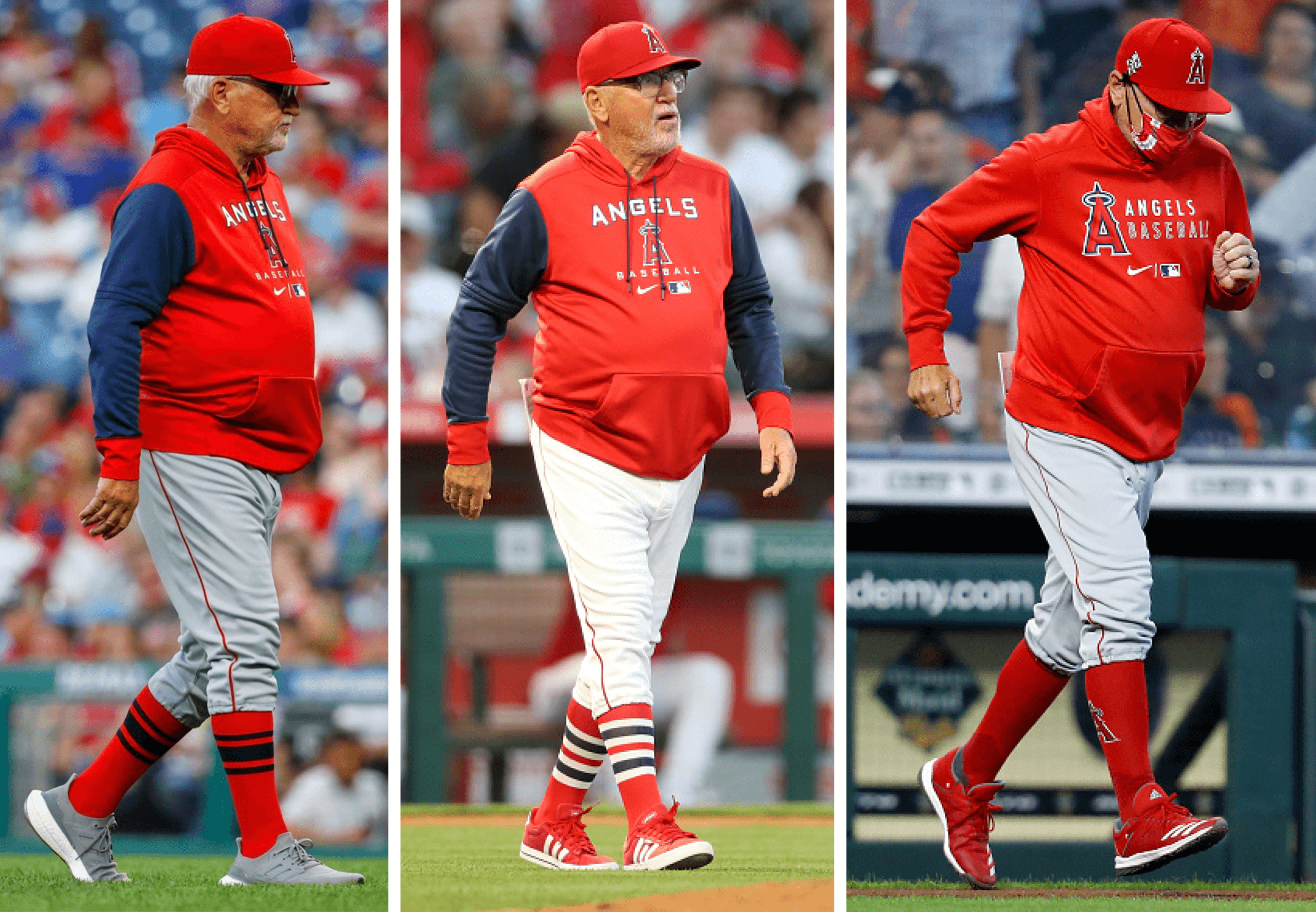 The Angels gave skipper Joe Maddon the boot yesterday. Whatever else you can say about him, Maddon almost certainly led the league in managerial hosiery styles. It’s rare enough to see a skipper who goes high-cuffed, and even rarer to see one who varies up his sock designs.

When you factor in Maddon’s eyeglasses, his unusual uni number, and his sock superstitions, he definitely qualifies as one of MLB’s more uni-notable managers (right up there with Buck Showalter, whose uni eccentricities I covered several months back).

At age 68, Maddon probably has at least one more managerial stint left in him. Hope so — even in this era of managers not having as much influence or impact as they once did, he remains an entertaining character. 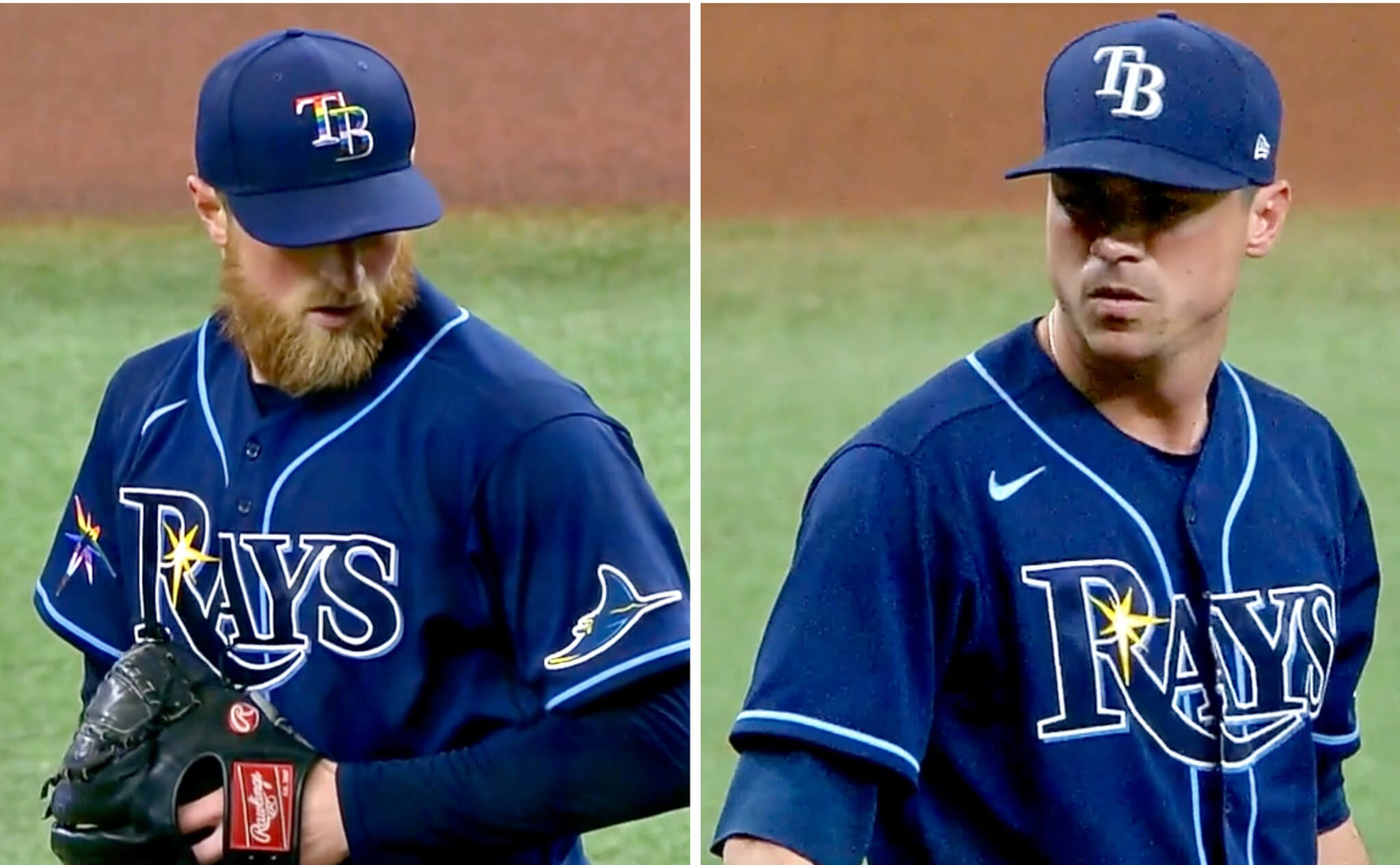 ITEM! New Bulletin article: The situation at the Trop last Saturday night — where most of the Rays wore the Rays’ rainbow-striped Pride caps and sleeve patches but at least five players opted out and just wore the team’s standard uni elements — raises some interesting questions about whether cultural-advocacy uniforms should be optional, and what that might mean if it became a standard protocol. I’ve explored some of the implications and possibilities in my latest Bulletin column. 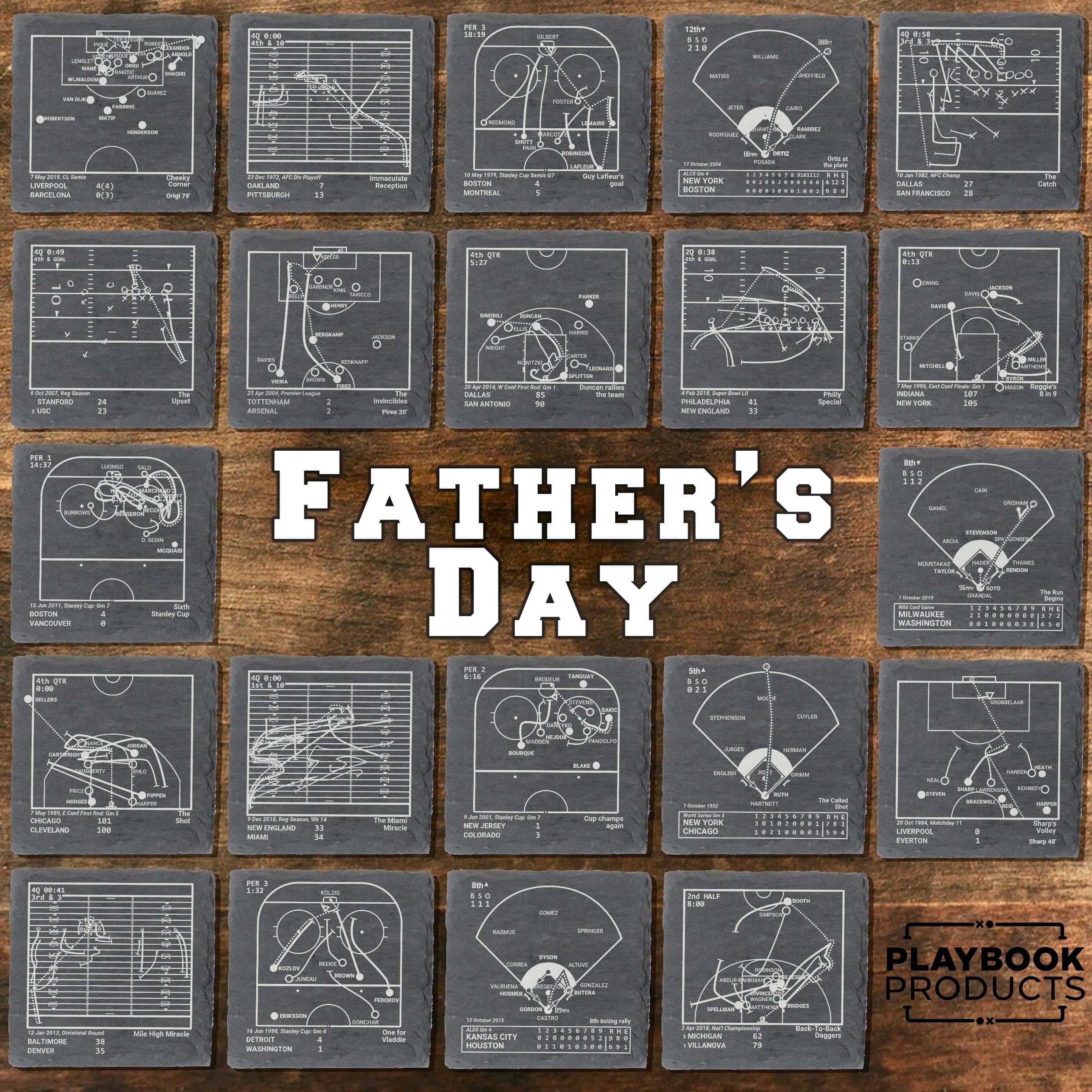 ITEM! New raffle: Playbook Products specializes in items featuring the designs of iconic plays (like the slate coasters shown above), and they’ve generously offered to let a lucky Uni Watch reader choose any item from their website. Winner’s choice!

In addition, if you enter the raffle and don’t win, you’ll still get a discount code for 20% off a Playbook Products order, good anytime up until Father’s Day.

This will be a one-day raffle. USA mailing addresses only. To enter, send an email to the raffle in-box by 11pm Eastern tonight. One entry per person I’ll announce the winner tomorrow. Big thanks to Playbook Products for doing this! 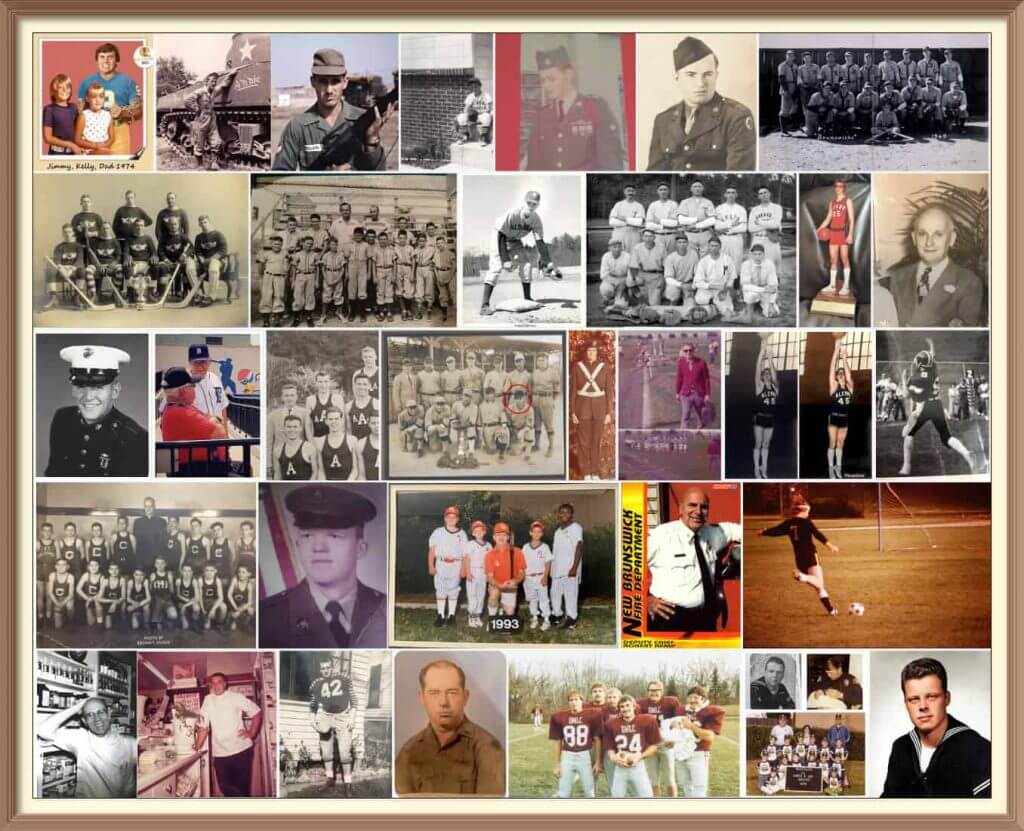 And now a few words from Phil: Father’s Day is coming soon (June 19), and I’ll once again be posting photos of Uni Watch readers’ “Dads in Uniform,” an annual tradition that began in 2013. This is always a very special day, and I’d love for as many readers as possible to participate — especially those of you who haven’t done so before. A few of you have reached out to me, saying, “I’ve run out of photos of my Dad,” so if you want to resubmit a photo that we’ve used before, please feel free to do so

To take part in this annual tradition, select one photo of your father (or grandfather or uncle) in uniform (it can be sports, military, work — as long as it’s a uniform), along with a short description of 100 words or fewer. Then email the photo — again, only one, please — and text to phil.hecken@gmail.com with the subject line “Uni Watch Father’s Day 2022” by next Tuesday, June 14, midnight Eastern. I’ll run all of the submissions on Father’s Day. Thanks!

Seam ripper update: After a brief supply-chain snag, I’m happy to report that all five colors of Uni Watch seam rippers are once again back in stock. You can order yours here.

Baseball News: The Great Lakes Loons, High-A affiliates of the Dodgers, are using a Cardinals-esque birds-on-bat motif for their Father’s Day unis. … This might be a first: The grounds crew of the Hillsboro Hops created a camouflage home plate area for their G.I. Joke night (from Joel Horn).

NFL News: The Steelers are the latest team to adopt the guardian caps in practice (thanks, Phil). … The Dolphins practiced in completely blank helmets yesterday — no logo, no stripe (from @Frankie__Doodle).

NBA News: A leaked jersey design suggests that the Spurs will wear a George Gervin-era throwback uniform as an alternate next season (from Kary Klismet).

Soccer News: German men wore German women’s jerseys during last night’s match against England. Belgium’s men will do the same  for today’s match against Poland (from multiple readers). … New primary advertiser for Premier League side Wolverhampton Wanderers (from Ed Zelaski). … New kit for Dynamo Dresden, who will be playing in the 3. Liga next season (from Kary Klismet). … EFL Championship side Bristol City have unveiled their new kits (from @texastrevor). …  New match ball for Poland’s I Liga (from Ed Zelaski). … New home kit for Newcastle United (from Ed Zelaski).

Grab Bag: The Air Force Academy has unveiled a new athletics logo (from Scott Heathcoat). … LIV Golf, the controversial Saudi-backed new golf tour, will have teams complete with the worst logos you’ve ever seen for its first event (from multiple readers). … Welsh rugby players Leigh Halfpenny and Scott Williams picked their favorite jerseys for a YouTube video (from Tim Dunn). … Team England has revealed its kits for the 2022 Commonwealth Games (thanks, Jamie).

Paul, I think you really nailed in your conclusion on the Bulletin article regarding sports uniforms and special advocacy uniforms. Well done.
Perhaps I am overly cynical given the proliferation of alternate uniforms and the tail wagging the dog regarding merch sales and uniforms. But I would fully agree that the “special cause” uniforms are gimmicks and nothing more than that. And there are far better ways an organization can promote a cause than playing dress up.

While I certainly believe that awareness and inclusion for historically marginalized/discriminated people is a societal good, I do also think that a lot of the leagues doing this are doing this more for appearances than the actual causes. I think that the players should be within their right to opt out of such causes, and that whatever pushback they get is something they have to deal with. It’s not “good” that they’re getting pushback – we need more diversity of thought to be allowed as long as it’s not discrimination/hate- so in this regards I have zero issue with the players opting out, and I think some of the criticisms are over the top and shows that in today’s society if you don’t go along with the crowd you’re automatically a bad person .

“Doing this more for appearances than the actual causes”

All of “diversity and inclusion” summed up in one sentence.

Let’s please avoid trying to engage in unsubstantiated mind-reading. Thanks.

I think your commentary today can extend to the proliferation of hosiery options as well.

Is it just me, or is Joe Maddon wearing St. Louis Cardinals stirrups in that center picture?

Socks, not stirrups. But yeah, those are the same pattern that the Cards wear.

The Playbook Products are super cool. As an offensive-minded football coach, the first thing I think when I see the football products is, “that play is upside down” because it is drawn from a defensive perspective (in my opinion). As I’m typing this, it occurred to me that many “iconic plays” in all sports are offensive in nature. There are certainly exceptions, such as “The Catch” by Willie Mays and “Havlicek stole the ball. These are just my thoughts. Appreciate the raffle!

The Rays players were exercising their right not to wear the rainbow flavored logos, and we shouldn’t judge their decision. The team gave the players the freedom to make the choice. Some might not agree with their choice, but that doesn’t make their decision any less valid. To me, this is a huge non-issue.

Actually, Jim, my article isn’t about judging their decision. It’s about whether this type of uniform should always be optional, which is indeed a significant issue.

I agree. It’s always good to let those with retrograde ‘opinions’ ‘show their asses,’ as some would put it.

Exactly. Let us know exactly who you are.

Exactly, let us know exactly who you are……so we can judge you for not going along with what our sensibilities.

That’s how I read statements like that and that is exactly what’s wrong with our discourse these days.

I made a very late entry the other day about the ripple effect of the opt outs by the Rays players that may not have uploaded, but if you’ll forgive me for any redundancy, I have a question: if the door to opt out because of individual principles, morals, and ethics is allowed by the team, I wonder what the odds are that a player will try to opt out of an advertiser patch for similar reasons.

Corporations are not a social demographic that has been marginalized in the past, but they do take on causes and use spokespeople that can equally offend any one of us, to the point that we boycott buying their products.

Unless the players are obligated to comply under league/union agreements, I have to believe it’s only a matter of time before a player stands up and says, “no thanks, I’ll pass” on wearing a uniform with a certain advertiser.

Maybe it’s already happened and I’m not aware of it. But if not, stay tuned.
-C.

if the door to opt out because of individual principles, morals, and ethics is allowed by the team, I wonder what the odds are that a player will try to opt out of an advertiser patch for similar reasons.

Yes, I addressed that possibility in the Bulletin article.

Can we please move all of these discussions over to article itself, where they belong? Thanks!

Enjoyed your bulletin article today. I agree that these themes should be limited or eliminated. I was also thinking about the uniform advertisements. Ted Lasso had a fictitious “Dubai Air” as the club’s kit sponsor, and after a player objected to their dirty business practices, he decided to cover up the name with tape. The rest of the team then followed suit. Should players be able to object to their team’s uniform sponsor? Let’s say you’re a vegan, or Jewish or Muslim, should a player be able to opt out if the ad was for “Honey Baked Ham”? Or you’re concerned about climate change, can you opt out if the patch is for an oil company? Since the players union have agreed to these ads, I don’t see how they can opt out. The players can express their concerns to their team management, who select the advertisers, but otherwise I don’t know how they can opt out.

Its a good question. Its certainly come up in the UK where larger ads are more prevalent.

“Since the players union have agreed to these ads, I don’t see how they can opt out.”
That is it right there. They agreed to the ads, because the ads will generate revenue, and they want a slice of that pie. You actually agree to let your boss use you as a walking billboard, hard to complain if the billboard contains something on it you don’t like.

It’s already happened multiple times, mostly in soccer. Everyone remembers Jordan covering the Reebok logo with the American flag at the gold medal ceremony back in 1992. Most recently, there was a soccer player in Turkey who refused to wear a shirt supporting Ukraine because of the lack of support for victims of war in the Middle East.

Today’s Bulletin piece reminds me what a good decision it was to sign up for a subscription.

Very strange to see the Dolphins in plain white helmets, even if it’s just for practice. I recall them going logo-less for OTAs/training camp in the past…but the stripes were always there IIRC.

Glad you decided to write about the issue.

If the LIV golf experience is as cheesy as the logos and names of its golf “teams” it is unequivocally doomed.

I’ll be upfront and admit that I didn’t read the article, but the real question is should cultural-advocacy uniforms be allowed at all. With the exception of throwbacks, alternate team colors, flag or memorial patches, any uniform aficionado or traditionalist should say hell no.

Hmmm. You’d think any uniform aficionado would also want to read the article…..