I’m a day late with this (holiday weekend and all, so cut me some slack), but something pretty remarkable happened at the start of Saturday night’s USC/Fresno State game. The good news for USC, as you can see in the video embedded above, is that Velus Jones Jr. returned the opening kickoff 61 yards.

The bad news — well, watch the video and see if you can spot what went wrong during the kickoff return. I’ll add some blank space to the page, so as not to give away the answer right away.

Did you spot the uni-related infraction? If you watched closely you may have noticed that the USC return team had two players wearing No. 7! Here’s a better view from a different angle (click to enlarge): 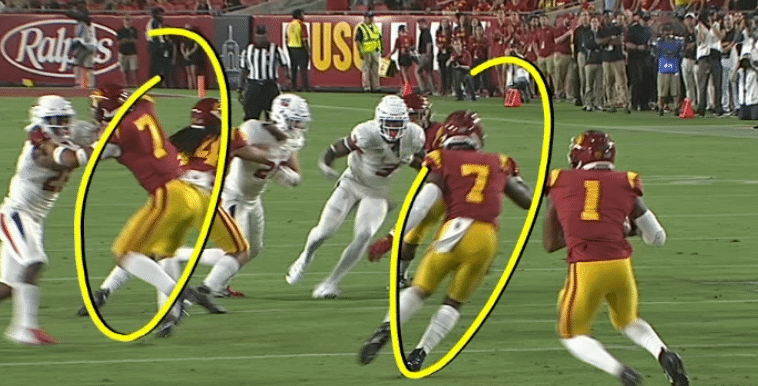 That’s a no-no. College football teams are allowed to have multiple players with the same number (there are quite a few instances of this on the USC roster), but you can’t have same-numbered players on the field at the same time. It rarely comes up except on special teams, so one of the same-numbered players will usually put a pinnie with a different number over his jersey.

But neither of the USC No. 7 guys did that, so the Trojans were flagged for illegal procedure, which allowed Fresno to rekick. This time the return netted only 19 yards.

Mistakes happen, and we’ve seen this penalty called before. But on the very first play of the season? That seems pretty bad.

(My thanks to Griffin Smith for the screen shot.) 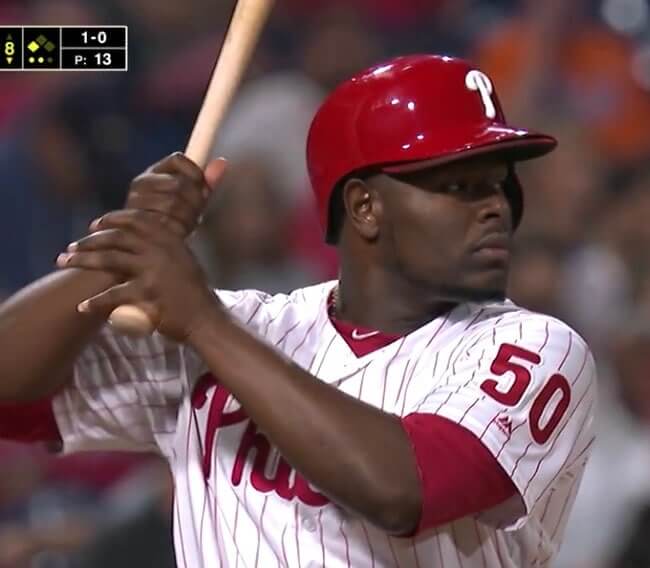 Old-school, times two: Phillies reliever Héctor Neris got a rare turn at bat last night — his first of this season, and only the third of his five-year career. He wore his cap under his helmet (something no position player has done since Juan Pierre retired after the 2013 season) and also went bare-handed!

(My thanks to Mike Chamernik for the screen shot.) 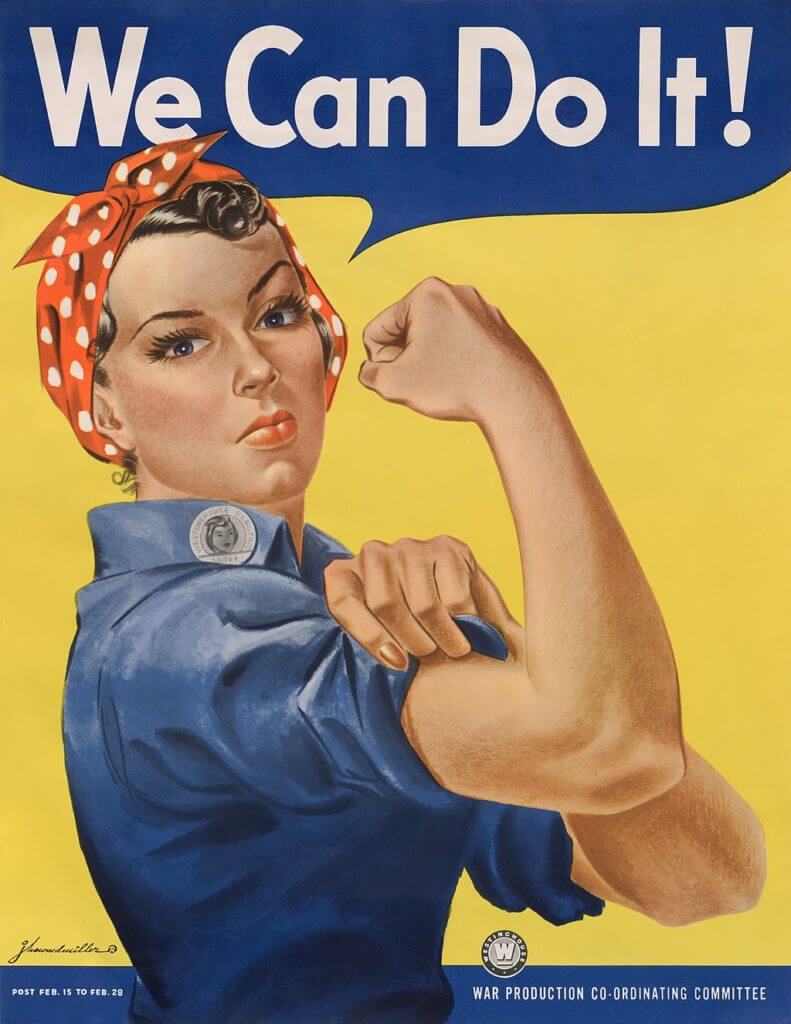 Some holiday thoughts: Today is Labor Day. It’s one of the biggest, most universal holidays of the year, and it honors something important — the American labor movement.

But while MLB uses its uniforms to acknowledge lots of other holidays — Mother’s Day, Father’s Day, Memorial Day, Armed Forces Day, Independence Day — it has never done anything for Labor Day. Frankly, I’d prefer to see them stick to the regular uniforms on holidays. But if they’re going to get all holiday-y, why exclude Labor Day?

So here’s a question: What would be a good uni-related way to commemorate Labor Day? Maybe have the players wear Rosie the Riveter sleeve patches? Have them wear the logo of their own union, the MLBPA?

I realize it’s easy to make jokes about this (“Have them wear a patch showing people barbecuing and shopping!” or “Have them wear white belts and shoes!”), but I’m serious — what would be a good way to honor the intended meaning of the holiday?

Rosie the Riveter is WWII-related, so probably not that.

But Rosie has become associated with the labor movement. (I’m aware of her history.)

How about a simple patch honoring Marvin Miller and/or Curt Flood?

Good idea! A player’s union patch would work nicely, or union insignia representing workers in locally significant industries, or even unions that represent workers at teams’ home ballparks, if there’s any representation there. Or players could get subversive by, say, drawing Sabo-Tabby and other traditional labor symbols on their caps with sharpies as a gesture of wildcat action.

At this point, athletes are probably the best-known organized labor force in the private sector, so it would be great to see athletes display pride in their unions. If they have to do it on their own, in defiance of owners and league officials, all the better.

Wear caps from the local unions who built and work at the baseball stadiums. During the game. Like they wore NYPD and FDNY caps after 9/11.

Love this idea. Connect the teams to their union locals (Teamsters, hotels, building trades, public employees). Would likely never happen (since it doesn’t make any money for New Era and probably breaks exclusivity deals) but it would be pretty rad

Purdue had a similar incident Friday night in their game against Nevada. On a punt, they had two players wearing #4.

Blue button down “work” shirts with collars and then a name patch on the left chest and the name of the team on the right.

The more goofy patches, the better!

You got me thinking…are there any MLB teams with patch-free jerseys?

Not this year with the universal “MLB150” patch.

As a part of their own design … the Yankees, obviously. The Red Sox home jersey doesn’t have a patch, IIRC. Tigers…?

it seems to be my week for getting people mad so, the 1994 world series logo with a circle around it and a slash through it

MLB would never never ever do that, but that would be absolutely HILARIOUS!!!!

How about a takeoff on the health patch worn during WWII with the word “labor” instead.

YES!! What a nice patch… gorgeous

Maybe wear a patch in support of the New Era workers in Derby, NY

As a USC alum who isn’t a fan of our head coach, one of the things that has stood out is the poor special teams place, such as not having 11 players on the field. SC pays a lot for their special teams coach and many like me thought he should have been let go after last season. Amazing they can’t even get the first play of the game correct.

Honestly curious here. Has nobody really worn a hat under their helmet since 2013? Is it just that you cant recall anyone wearing it that way or is that tracked somehow?

Is it possible that someone did it randomly, like Neris did last night? Sure. But nobody has done it *regularly* since 2013. Juan Pierre was the last player who did it on a routine basis.

Gotcha. Thank you for clarifying. I truky hoped someone was tracking that stuff.

I like the idea of honoring labor. It is an overlooked holiday in comparison to the other national holidays. As for patch, I am sure those with artistic abilities can work something off the department of labor shield. It seems to have the right elements: link

On Labor Day the MLB teams should replace their batting helmets with construction hard hats.
link

There are some USC numbers assigned to three players.

The NCAA has no limit on the maximum number of players on a football team, does it?

But isn’t there a limit to the number of players that can be dressed for a game? Depending on how many that is, I otto’s think that the double number situation could be avoided altogether, without even having to resort to pinnies. BTW, I wasn’t even aware that this was done, does anyone have a picture?

While I don’t think there is a limit to the number of players can can be on a college football team, one interesting rule that few know about is that any player who is not on a football scholarship must be a true walk-on, that is he is not allowed to be on an athletic scholarship in another sport.

The explanation I’ve heard was that back in Nebraska’s glory days, the coaching staff realized they could stockpile talent by signing top high school players to (for example) a wrestling scholarship and subvert the limit on football schollies…

Caps under helmets…I remember that well! Is it worth discussing when this trend was most popular and who would be the poster boys for it? I did a quick investigation and found Hank Aaron sporting it quite a bit. I imagine the 60s and 70s would be a prime era for it.

There was no poster boy; most players did it.

Fell out of favor in large part because wearing the cap is less comfortable with an earflapped helmet.

Not that I’m aware of.

I used to wear it under until I bought my own helmet starting for my middle school team. We all had to share helmets growing up and if you were smart and found a perfect fit, you hid it after you had to retake the field. Stealth dibs.

I didn’t wanna get lice, if someone had it. Plus they were leftover Rawlings from previous years. It did provide a nice snug fit though. Prevented loose bobbing, for me at least.

For the record; I was gifted a one flap from my grandparents, for my birthday, which was right before the season. So with the help of my grandad, it was repainted with our school colors (navy and gold) and adorned with a sticker with the school logo. Our helmets were plain, so we painted it in the old style Padres format.

When I went to high school, I had to repaint, re-lacquer and re-sticker the helmet. Our colors were blood red and silver. Same paint style. Always loved the way it looked.

I wish I still had that thing.

I also was the only one who wore stirrups growing up playing baseball. I GOT IT even then.

I like the raised fist as a potential labor tribute, but I think too many people would read the wrong things from it, but for me it’s a powerful symbol

I’d have to go through the game replay to find it, but apparently during the Wyoming/Missouri game, Wyoming had 3 players suited up wearing #36. There was some discussion about it by the announcers during the broadcast, and one of the #36 (Titus Swen) switched to #89.

Reading some of the comments about Labor Day commemoration ideas, I just want to offer a reminder. Labor Day recognizes ALL laborers. While I am pro-union and have been a local union president, it’s important to remember Labor Day is not Union Day. Let’s not use another occasion to somehow separate us into more silos. All work and workers should be celebrated for Labor Day (actually every day). Something like the repurposed Health patch would make a lot of sense.

Players union patch makes sense — not because a union symbolizes work, but because it helps us remember that the people on the field are laborers too. Or just a ceremony recognizing workers before the game. Might be interesting to have the ceremony recognize all of the people involved in making a game day happen (players, coaching staff, vendors, security, janitors, etc.).

Or… give everyone the day off?

Labor Day would be a perfect opportunity for a “Bread and Roses” patch to honor labor movements.

Something similar to the national league logo, except with the eagle holding a chaff of wheat in one talon and a rose in another could be tasteful. The eagles head would obviously stay looking in the same direction as it currently is, forward…