Inexplicable move last night by the Eagles, as they wore their mono-black alternates for last night’s game against the Raiders. Seriously, if your primary team color is green, isn’t that what you’d want to wear on Dec. 25? Okay, so it’s also what you’d want to wear on the other 364 days of the year, but especially on Christmas, right? Jeez (lots of additional depressing photos here).

Over the past three weeks we’ve seen the number of games with the home team in a colored uniform and road team in white level off at 33%. There’s continued to be a decrease in the number of traditional matchups, and an increase in color-vs.-color games (click to enlarge; stats do not include yesterday’s games): 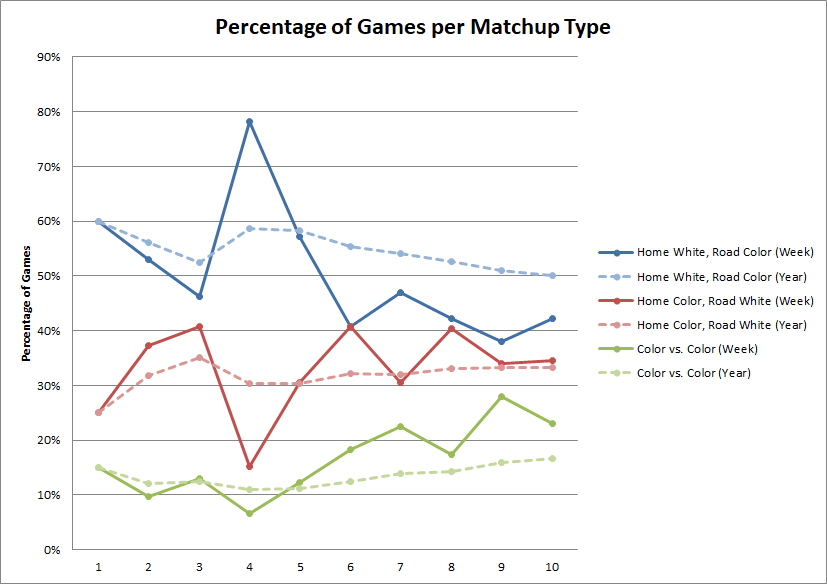 A few other notes:

• Most teams are expected to unveil their fourth uniforms tomorrow, Dec. 27. A few teams jumped the gun and revealed theirs over the weekend, including the Grizzlies and Jazz.

• The Heat have also continued to show that their preferred uniform is their throwback set. They’ve worn the black ’90’s-era uniform a total of 16 times, or 49% of their games played. By contrast, their “new” black set has only been worn three times (9%) and not at all since Oct. 28, which was their fifth game of the season. According to their newly released uniform schedule, they’ll wear the black design again on Jan. 14.

Sorry, no Ticker today. We’ll get back to regular content tomorrow.

In case you missed it yesterday, here are the year-end raffle winners. Have a great Boxing Day and I’ll see you back here in tomorrow morning. — Paul

No Christmas Day jerseys this year in NBA.

Noticed that; any reason why?

Because four or five jerseys per team is enough?

Every game is like Christmas for Nike jerseys. They tear as easily as wrapping paper.

I’m pretty sure link (scroll down a few…)

Funny! That’s the only reason why I don’t want to get a NBA jersey!

Hey Paul, I took a swing at your irish creme recipe. Big hit with my in-laws on Xmas eve … big hangovers on Xmas day. Luckily had a few drops leftover to add to morning coffee! Look forward to making it again.

Eagles going full-on BFBS is a crime any day of the year. Burn ’em and move on.

And against the Raiders, no less.

Eagles BFBS is brutal. The finish of their helmets do them no favors either, as with the black jerseys it sort o just makes their helmet look black being illuminated with green lights.
If they are going to insist on wear the black jersey at least match it with the green pants.

I wouldn’t say “match” the black and the green so much as link.

And yes, that looks *better*. But we all agree the Iggles need to ditch the money “midnight” green they currently use and just link full time.

Agree on all fronts. I’d be ecstatic if they simply swapped out the “midnight” green for kelly green in their current design. I think the vast majority of Eagles fans want kelly green back, word for years has been Lurie’s (now ex) wife hates the kelly green, and that is why it hasn’t returned.

Let’s do the same swap with the New York Jets while we are at it. How can the NFL have 32 teams and have not one wearing kelly green? A very unpleasant circumstance.

While we’re at it, the Eagles returning to kelly green and silver is pretty high on my Uniform Wish List.

I’m frequently disturbed by how little thought NFL teams seem to give to the match-up when making choices for gameday.

Why did the Rams and Titans both wear navy pants when they faced off? Shouldn’t the Rams have worn white? Or the Titans Columbia blue?

Why did the Eagles wear black against a team that specializes in black?

Why couldn’t the Browns break out the orange pants to play the Bears?

Yeah. It is a testament to how little effort they put into giving their teams unique visual identities with their uniforms. For example, when the Bills went back to the white helmets, now they look so similar to the Colts. Why not keep the red helmets with blue jerseys? Visually distinct in the league.

Interestingly enough, the Bills have seemed to embrace the all red look from Color Rash at times. I wonder if that’s a direction they’re looking to head.

Some great uniform and equipment-related footage in this 1965 pre-season Boston Bruins film!!!!

This includes some footage of their rarely-seen BLACK uniforms of this era!! Try searching for pics of the Bruins from any of the early 60’s years and all you get is their white or yellow jerseys!

Isn’t that what the NFL players want anyway, Mono Black vs Mono White?

Yeah, if any day I’d okay a matching top and bottom NFL uniform, it would be the Eagles wearing GREEN on GREEN on Christmas. Black on Black is as dumb as the Eagles having black in their uniform to begin with.

Kelly/Silver/White is the way to go BACK TO!!!

Along these lines, has anybody ever brought up the idea that perhaps the NFL should stop letting teams choose which of their jerseys to wear on a given day and instead have the league form an Aesthetics Department that would choose the best combos for each team for each game?

I agree with the sentiments expressed on the BFBS Eagles. All the more reason the city that booed Santa and threw snowballs him should never have been given a Christmas home game in the first place.