A TV commercial for an anti-stroke drug called Xarelta, featuring NBA legend Jerry West, began running back in August (see above; it seems to play better in Chrome than in other browsers, at least for me). I’ve seen it a few times but never really paid attention to it until last night, when I noticed that it includes a very clever moment: At the 53-second mark, West is shown autographing a photo, and there’s a big NBA logo hanging on the wall in the background. That logo, of course, is based on West himself, and the photo he’s autographing is the shot that was used as the basis for the logo.

The NBA, incidentally, has never formally acknowledged that West is the basis for the logo (although the logo’s designer, Alan Siegel, has flat-out stated that he used a photo of West to create the design), yet they approved the use of the logo in this ad. Interesting — almost like a wink-wink thing. 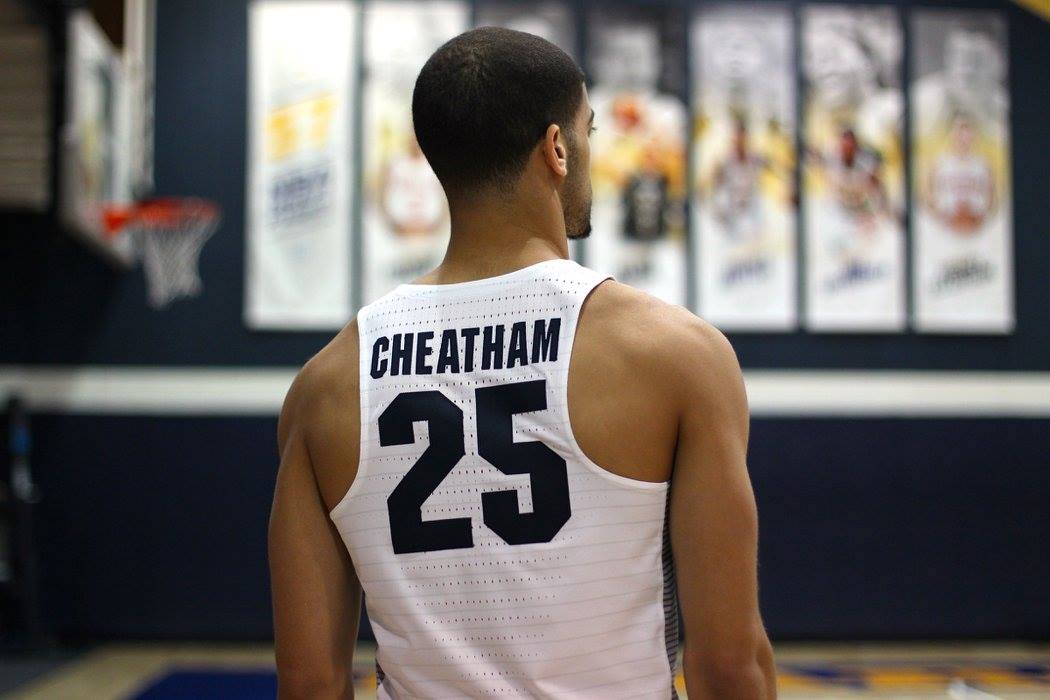 College Hoops Preview: My annual college basketball season preview is up now on ESPN. It covers over 160 schools, making it by far the largest season preview I’ve ever done for any sport. The big storyline this year is Nike’s new slimmer tailoring template, which shows a lot of skin in the back (see above). Check it out here.

LAST CALL for the football T-shirt: This is the last day to order the Uni Watch T-Shirt Club’s latest design, which comes in three color options (grey, black, green) and is available here. Here’s the design: 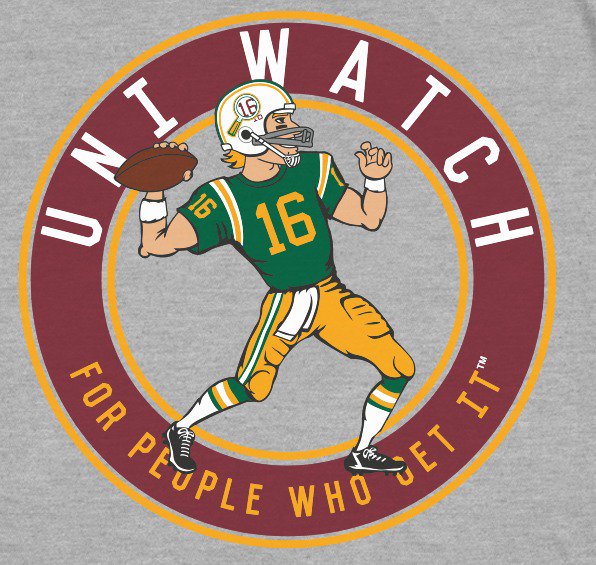 Again, the shirt is available for ordeing here. My thanks, as always, for your consideration.

#Nov8purple results: My thanks to everyone who helped document purple-clad TV reporters on Election Day (and especially to Chris Howell, who really went above and beyond). You can see the screen shots that people submitted here.

Baseball News: New gloves for Northern Kentucky (from @The_Amish_Robot). … The Chicago Transit Authority is celebrating the Cubs’ World Series victory by adding Cubs-themed rail cars to some of its lines (thanks, Mike).

College Football News: Here’s what UNC will be wearing on Thursday against Duke (from James Gilbert). … A college player in Kentucky plays with a prosthetic leg — and even returns kicks! (Big thanks to Jason Hillyer.) … We had already talked about Eastern Michigan wearing Election Night helmets last night. Their opponent, Ball State, joined in by going with a stars/stripes helmet. … The Washington Huskies will wear these Veterans Day uniforms on Saturday. Each jersey will include the name of a veteran associated with the school.

Basketball News: Here’s a time-lapse video showing the construction of the Kings’ new arena. … The Raptors will debut their Huskies throwbacks this Saturday night (thanks, Phil). … New Pat Summitt memorial patch for the Tennessee women’s team.

Having never played ball at the college level, is it the norm that all gloves are supplied (and their use mandated) by one company? As I am typing this it seems the answer is an obvious YES, at least for schools with gear suppliers. Am I right?

I play at the NAIA level (actually this is my second NAIA school), and I’ve never heard of one school at our level getting gloves supplied by all one manufacturer. What does happen, however, are certain deals made available to the school to get gloves for cheaper.

I can’t speak for NCAA schools but can provide that glimpse into NAIA. Of course, the NAIA factor makes sense due to school size and budget.

College Hoops Preview! This and the College Football Preview are my favorites!

Pharmaceutical ads seem to be able to get more leeway than other industries advertisements. With all the sponsorship and celebrity “endorsements” that regularly come real close to the real thing, if not THE real thing.

Cubs-themed rail cars look cool but I can not help but wonder who picked up the tab, CTA or the Ricketts family?

A Beggs (OK) players goes even further with the amputee thing…(Not that it’s a competition).

This is just a thought I’ve been having and would like to open it up to anyone here: Shouldn’t it be up to those receiving the gesture whether or not they feel “honored”? It seems more appropriate to say they’re “commemorating” a person or an event I think. Any thoughts on that?

So you’re saying it should be up to Pat Summitt, who’s dead, to decide whether she’s honored by the patch?

I’d say no. Awards and commemorations are intended to show honor to a person. Whether the person to whom the honor is showed feels honored is immaterial to the intent of the gesture. The Nobel Committee, for example, honored Jean-Paul Sartre with the prize in literature, and I’d argue that is a correct use of the verb “honored,” yet Sartre himself refused to accept the prize.

Conversely, a person may feel honored by a gesture that was not intended as such. And that’s also a perfectly appropriate use of the word. The concepts of “showing honor to” and “feeling honored by” are separate and potentially independent of one another.

General Patton George C. Scott would like a word with you

Lots of different sleeve colors on those kids in” uniform”:
Red, Black, White, and None.

And lots of purple in general (I know, it’s their signature color).

The NCAA preview is up:
link

UNC jersey is such a downgrade, IMO. (Referring to the font.)

This may have been brought up previously, but is that a whole lot of apostrophe catastrophe on that UConn women’s championship floor patch in the college bball article?

Just to finish up on the Election and who was wearing what colors:

Make that Clinton’s concession speech, from this morning. Lack of sleep…

It may not be the intention, but La Salle’s collar trim resembles the clerical collar worn by the De La Salle Christian Brothers, the order that founded the school.

To sum up college basketball this year, I like the bigger arm cutouts; they’re more old-school than in recent years. I definitely dislike double-decker words on the front, like Mississippi State, that’s an unfortunate trend. I like my varsity basketball with a word over the number and a word under. What’s with the wussy script lettering (N.C. State, Marshall)? Is that because it’s typeset, and not hand-lettered?

There are rumours that the Toronto Huskies (Raptors) have their own Huskies court design to go with the throwbacks:

I am really hoping this is legit. Has anyone heard more?