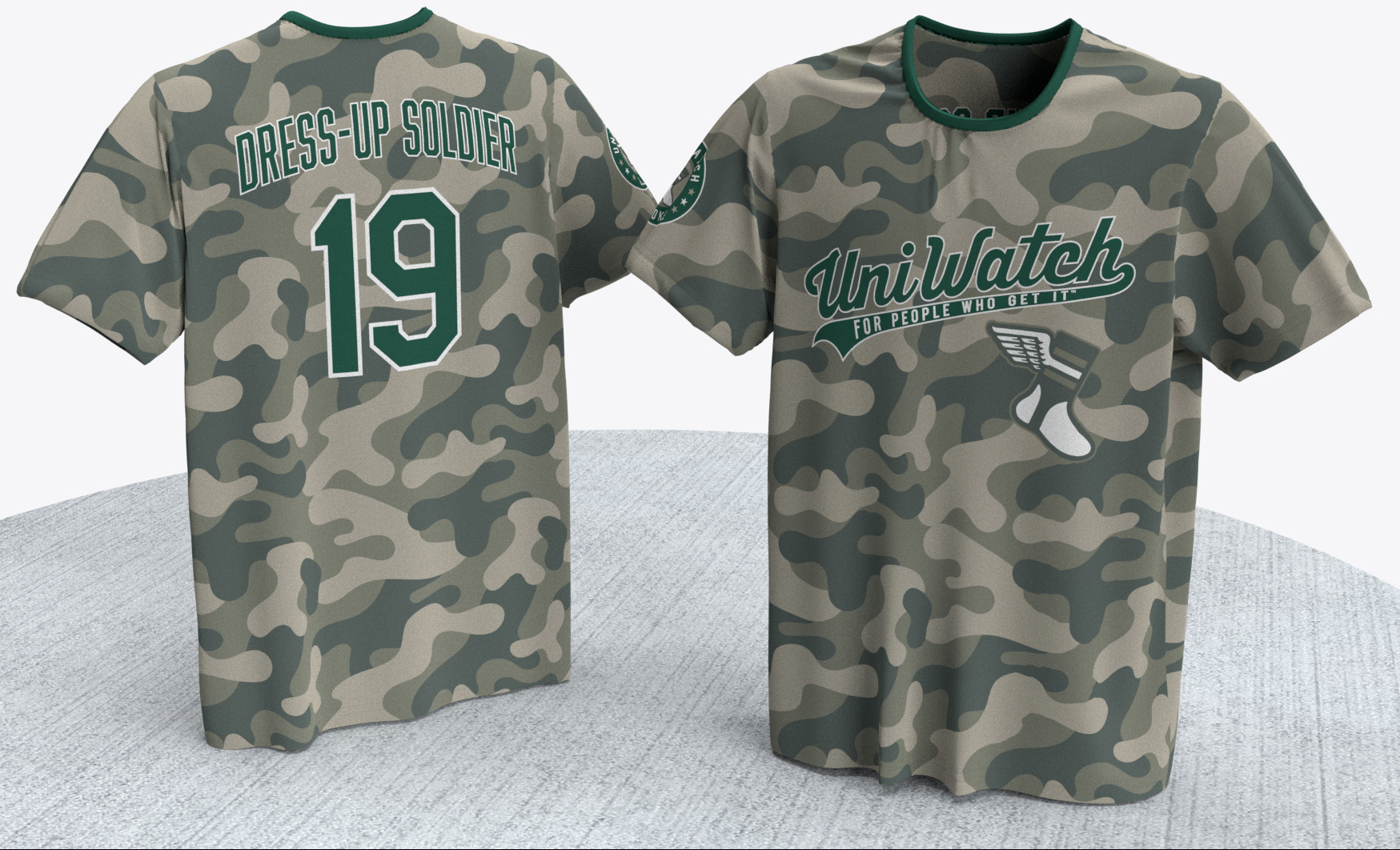 The Uni Watch Camouflage shirt, like many of our shirts, mimics a team uniform — in this case, a camouflage uniform. The “Dress-Up Soldier” NOB lets you say what you think about putting athletes in camouflage clown costumes, as does the “G.I. Joke” sleeve patch, which you can get a better look at here: 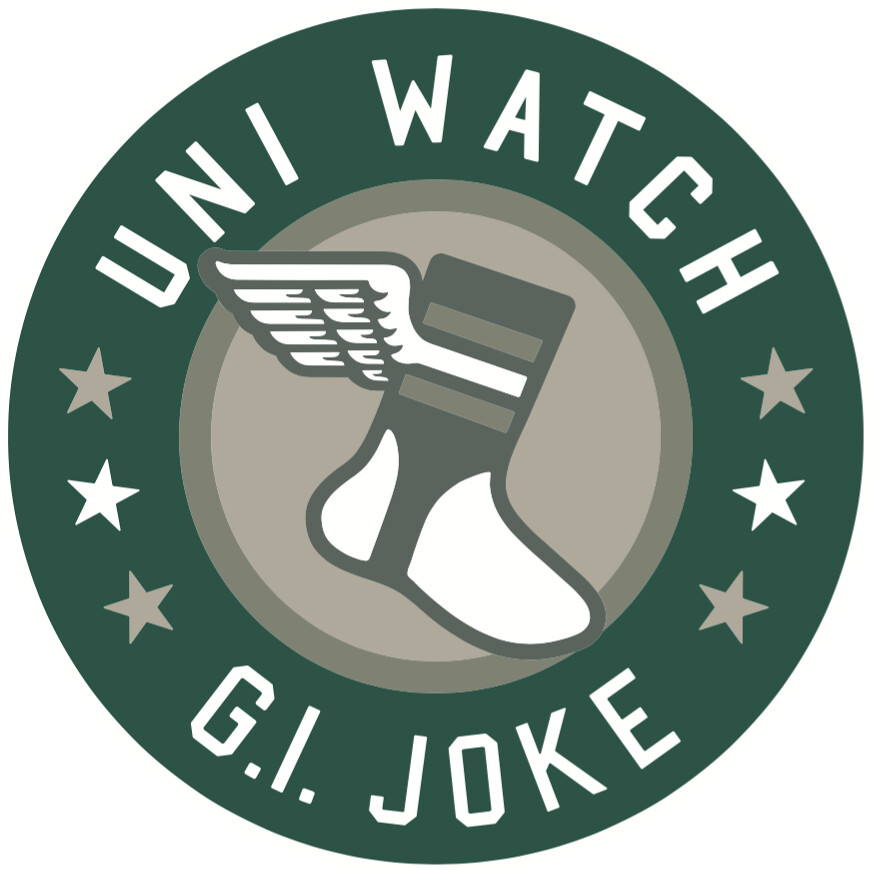 You can order the shirt here. I’m proud to announce that 100% of Uni Watch’s profits on this item will be donated to the Peace Corps.

Most Uni Watch readers understand the message that this shirt is trying to send. But as is sometimes the case, a few people have either misunderstood or taken issue with that message. So let’s shift into FAQ mode:

This shirt is disrespectful to the military!

Actually, no, it’s not. You know what’s disrespectful to the military? Dressing able-bodied young athletes in camouflage clown costumes in a cynical attempt to sell merchandise. This shirt takes aim at that practice (just like our BFBS shirt is a critique of black alternate uniforms and our flag-themed “Pandering” shirt is a critique of stars/stripes uniforms).

But the phrase “G.I. Joke” on the sleeve patch makes fun of the military!

No it doesn’t. I’ve been calling camouflage sports uniforms “G.I. Joke” for many years now. That term — like the shirt itself — refers to the camo clown costumes, not to the military.

Yeah, but not everybody knows that. If I wear this shirt out and about, people who don’t know about Uni Watch might see it and get pissed off about it.

If someone asks you about the shirt and you end up having a conversation about it, that doesn’t strike me as such a bad thing. Conversations are how we exchange ideas, engage with other people’s points of view, and so on. But if you want to avoid that, no biggie — don’t buy the shirt. There you go, problem solved!

You’d probably sell a lot more of them if you toned down the message.

Maybe, maybe not. But maxing out the sales numbers isn’t my goal here. My goal, as usual, is to have a satisfying creative project that expresses a point of view. This shirt says exactly what I want to say, in exactly the way I want to say it. If it sells a lot, that’s great; if not, that’s fine too. Either way, I’m pleased with it.

Why are you donating the profits to the Peace Corps, instead of to a military charity?

As I’ve been writing for many years now, one of my issues with the explosion of camouflage sports uniforms is that they reinforce the twin myths that all soldiers are heroes and all heroes are soldiers, neither of which is true. By donating this shirt’s profits to the Peace Corps, I’m putting my money where my mouth is and supporting a different group of very worthy heroes.

You should stop mixing sports and politics.

Actually, it’s the sports leagues and teams that keep injecting politics into sports by relentlessly celebrating the military to the near-exclusion of all other sectors of society. I’m simply responding to that politcal message with a counter-message of my own.

If you’re really opposed to mixing sports and politics, then you should join me in calling for the leagues to dial back the camouflage uniforms. If they did that, there’d be no need for me to create this shirt.

I don’t know why you have a problem with military appreciation uniforms. I really like them!

We’ll have to agree to disagree on that point. If that means you won’t be purchasing this shirt, that’s fine — nobody said you had to buy it!