A snowy owl has been spotted at Coney Island over the past few days. That’s something we don’t normally see around here, so yesterday morning the Tugboat Captain and I made the snap decision to go down to Coney to have a little look-see.

We didn’t see the owl (insert “wild goose owl chase” jokes here), but we did see a bunch of other nice stuff. The tide was out, there was almost no wind, and there were very few people around, so everything was very calm and still. In addition, as you can see above, the beach sand had been raked or landscaped in some way, which we’d never seen before. It was really beautiful.

Later, we saw the gadget that had created the patterns in the sand — something called a Barber Surf Rake: 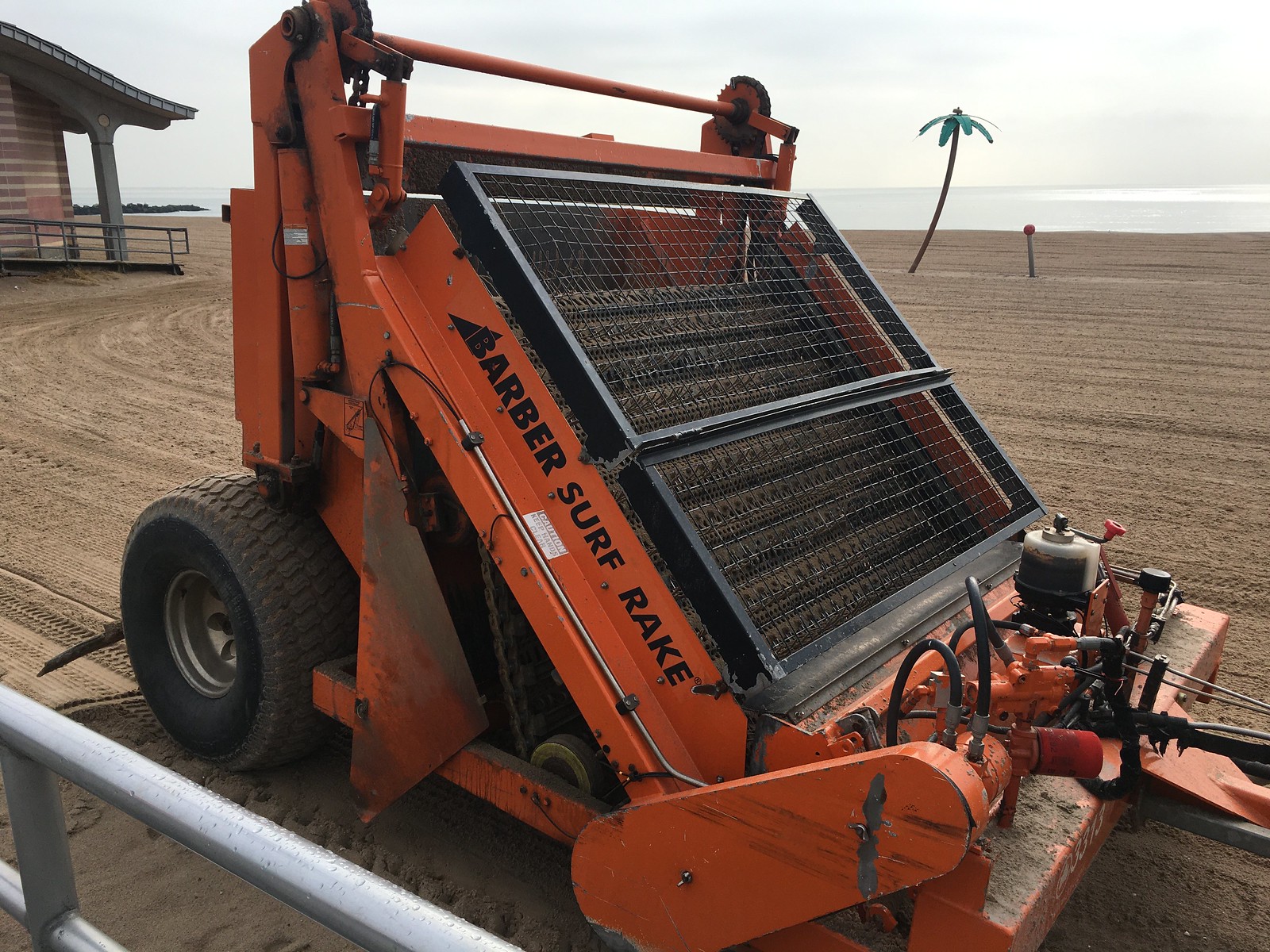 There was a municipal employee there, so I asked him why they raked the beach. He said the gadget actually cleaned the sand by extracting pieces of trash. He started it up so I could get an idea of how it worked:

Uni Watch proofreader Jerry Wolper points out that this is basically “a Zamboni for the beach” — indeed!

Down on the beach, I saw this little water/sand pattern that reminded me of how you can see rivers and their tributaries from aerial photos: 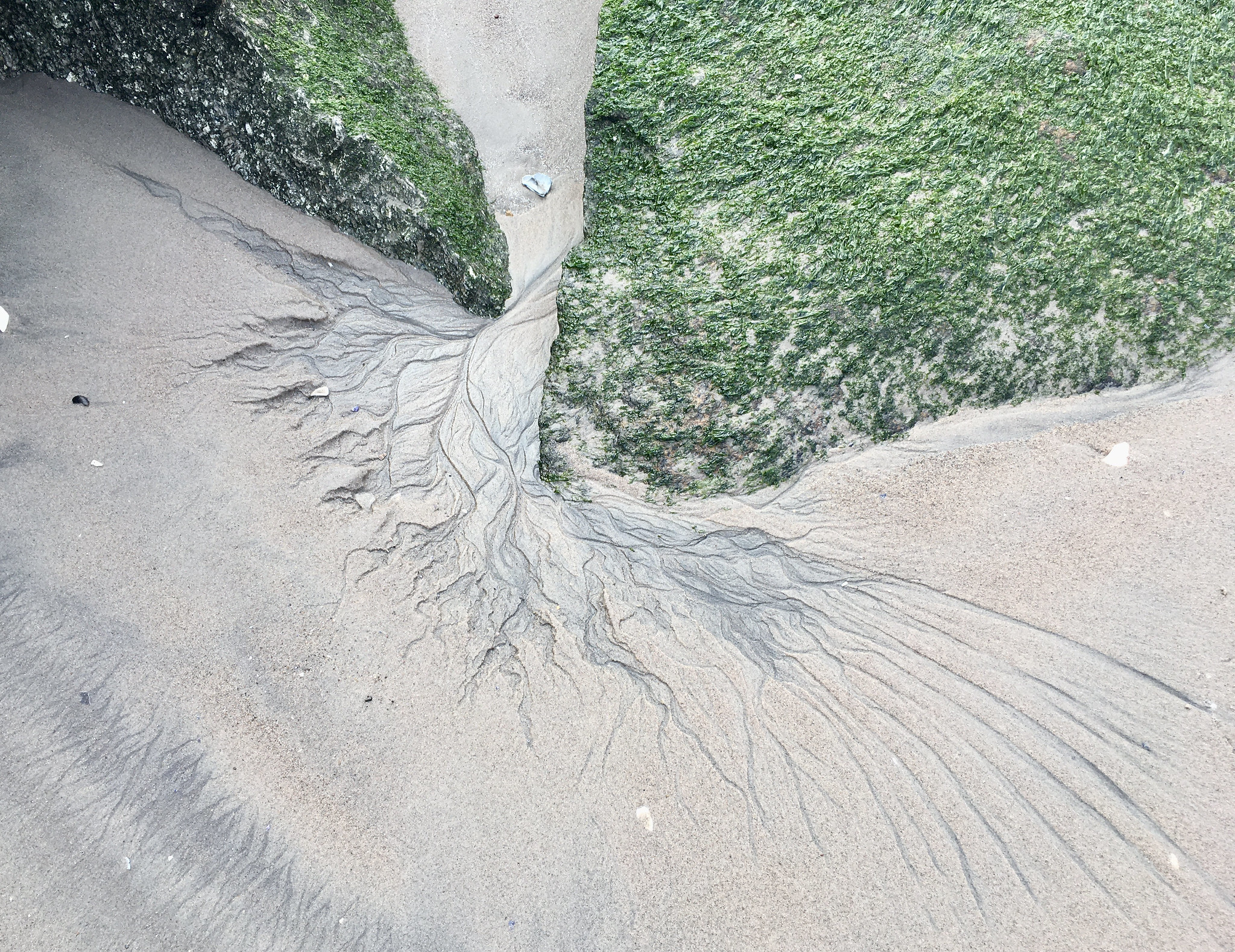 All the rides and attractions were shut down for the winter, of course. I liked seeing how some of them were disassembled into their component parts: 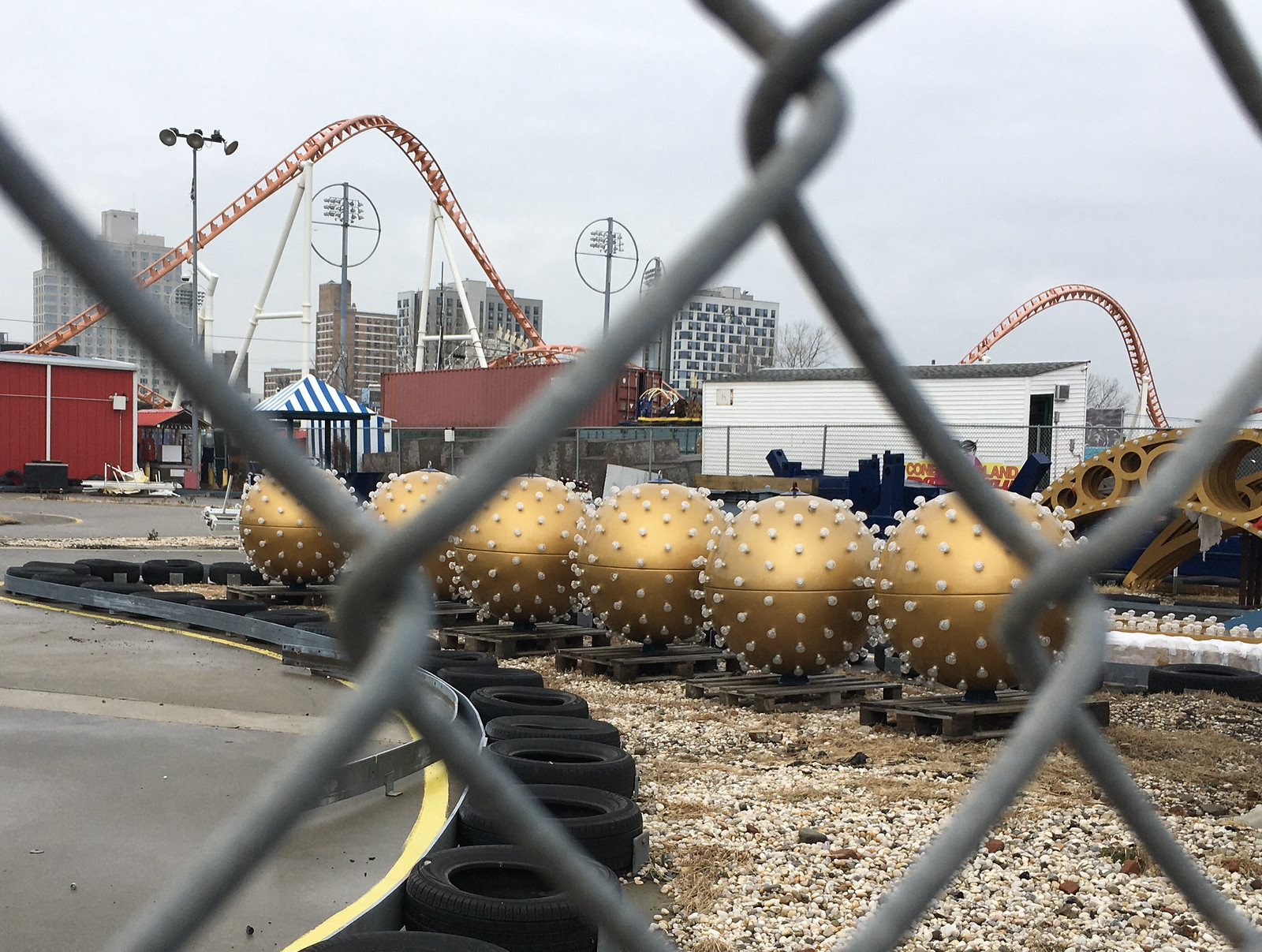 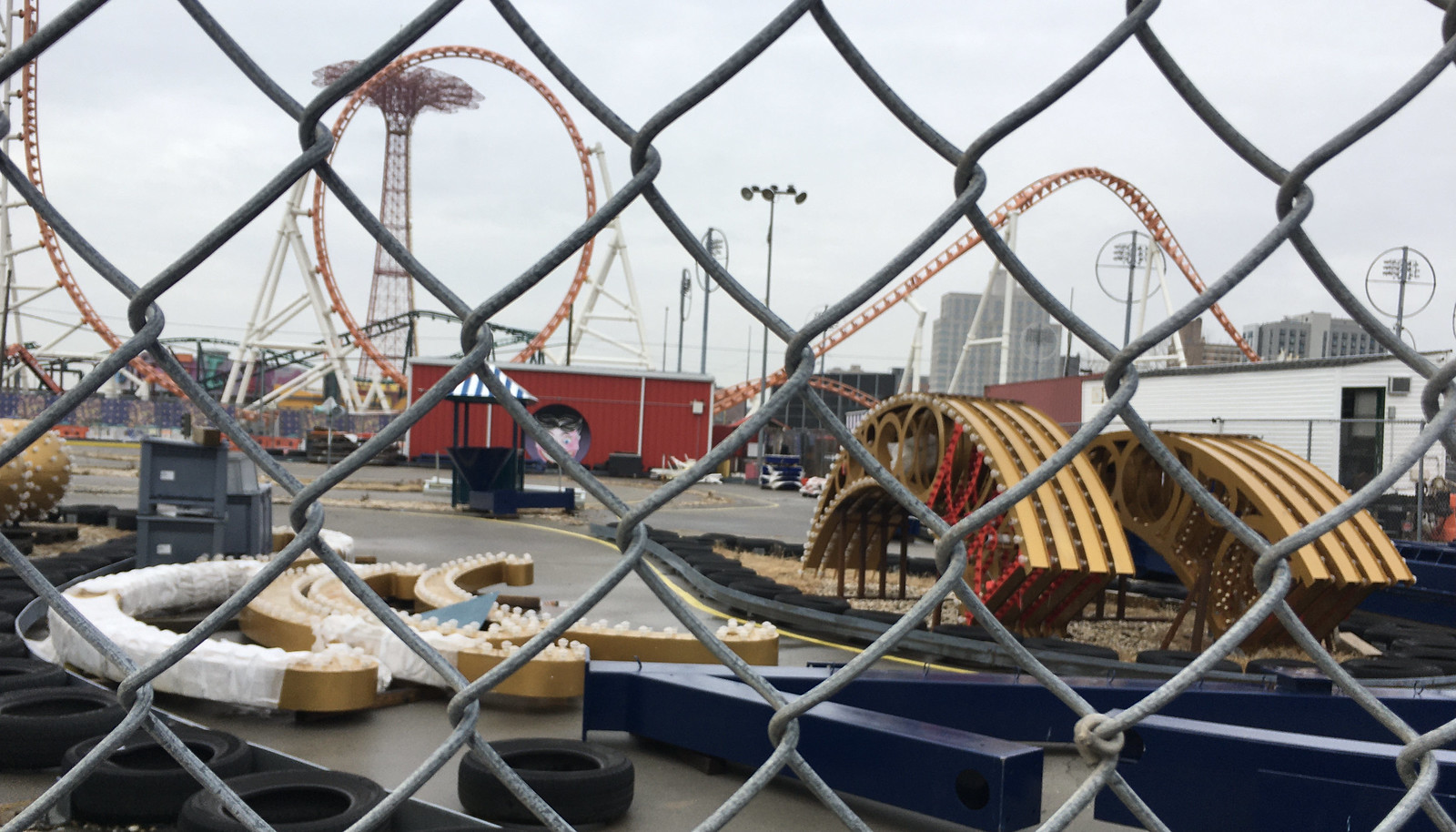 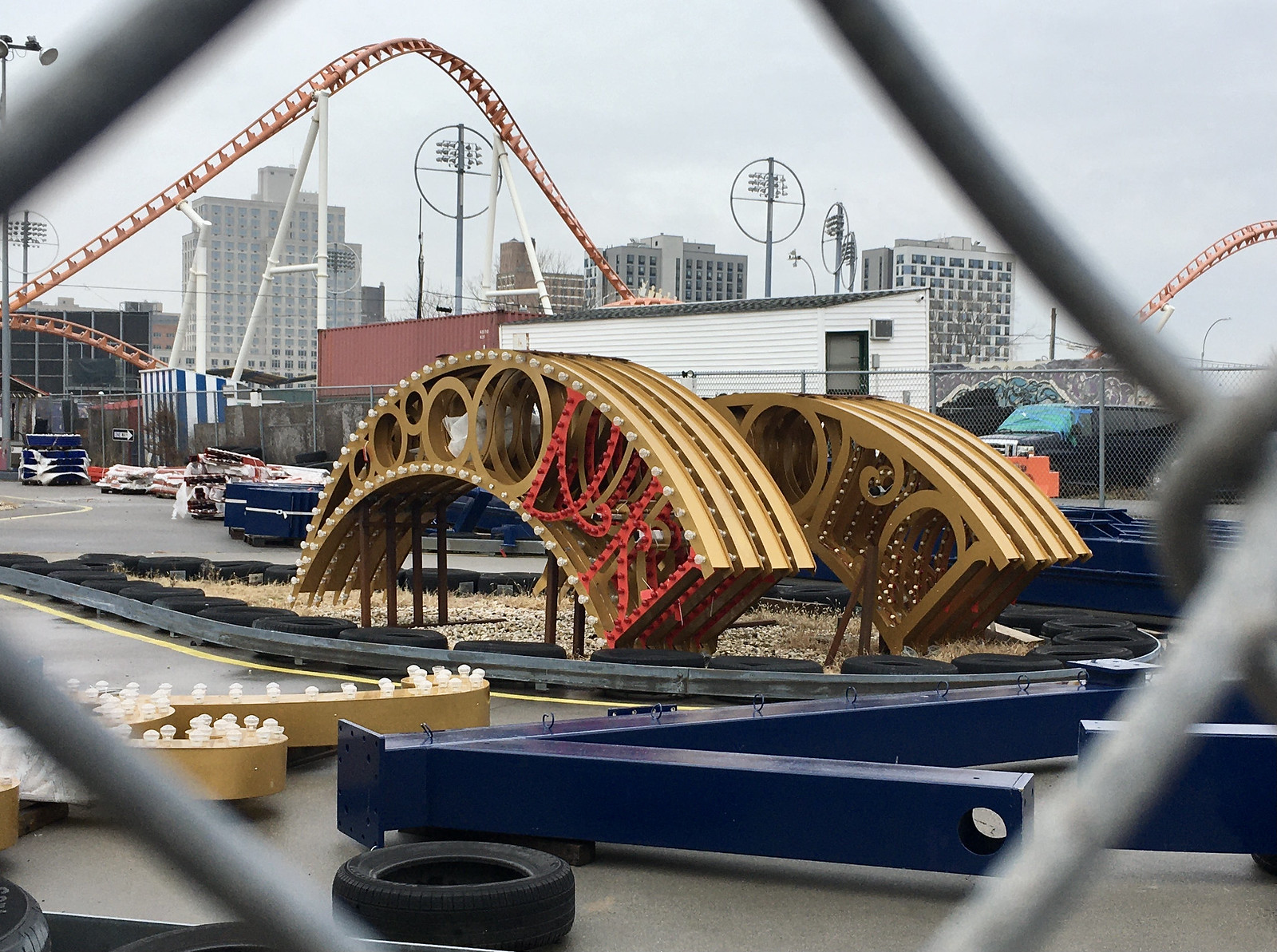 Up on the boardwalk, we saw a sign with a very unfortunate apostrophe catastrophe. I’m not sure how long the sign’s been there, but it was the first time I’d seen it: 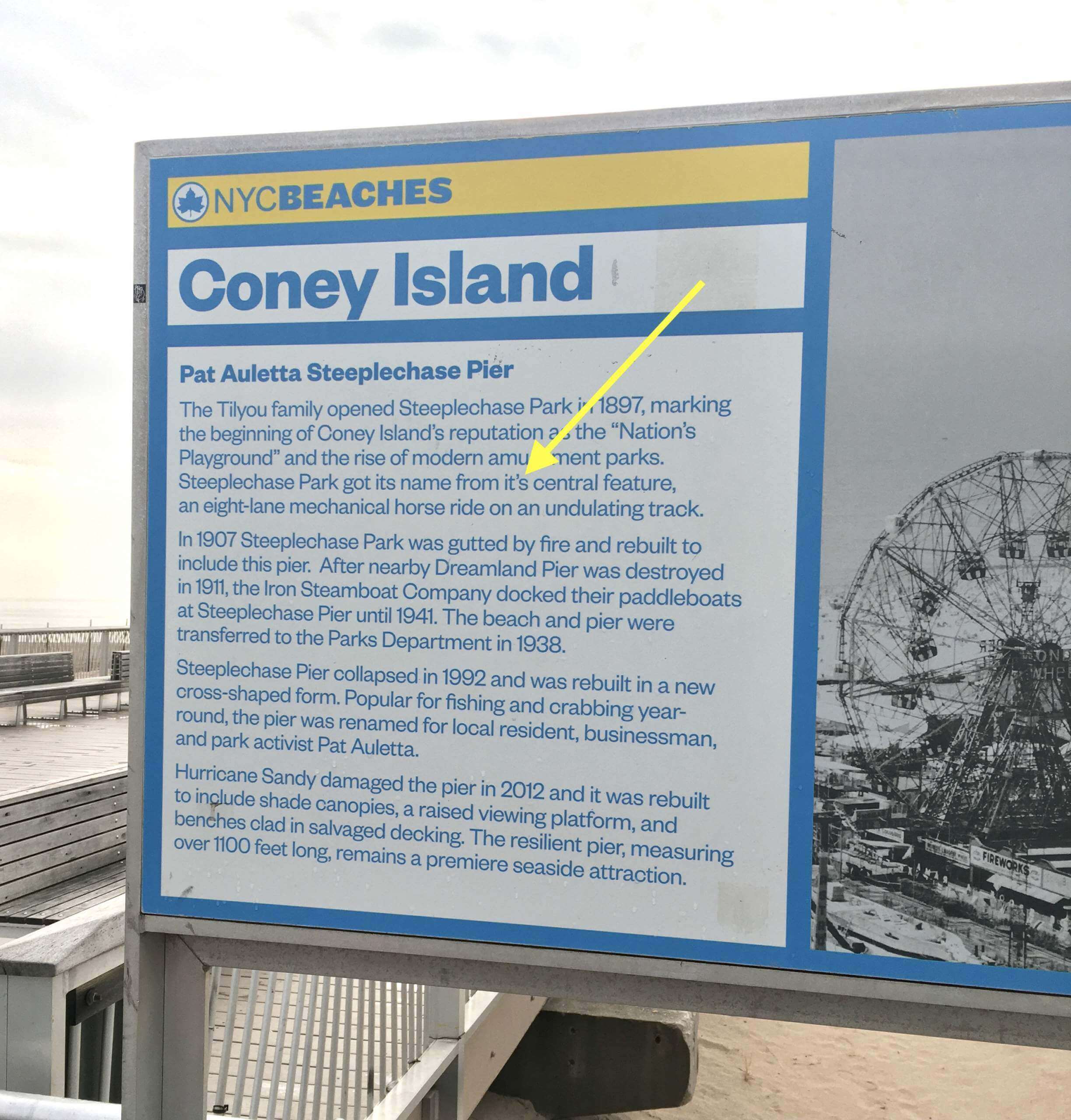 We made a mental note to bring some white-out or touch-up paint with us so we can fix the sign the next time we go to Coney.

I liked how the lettering on this Nathan’s sign was distorted as it wrapped around a bulge in the building on which it was painted, especially on the word “Famous”: 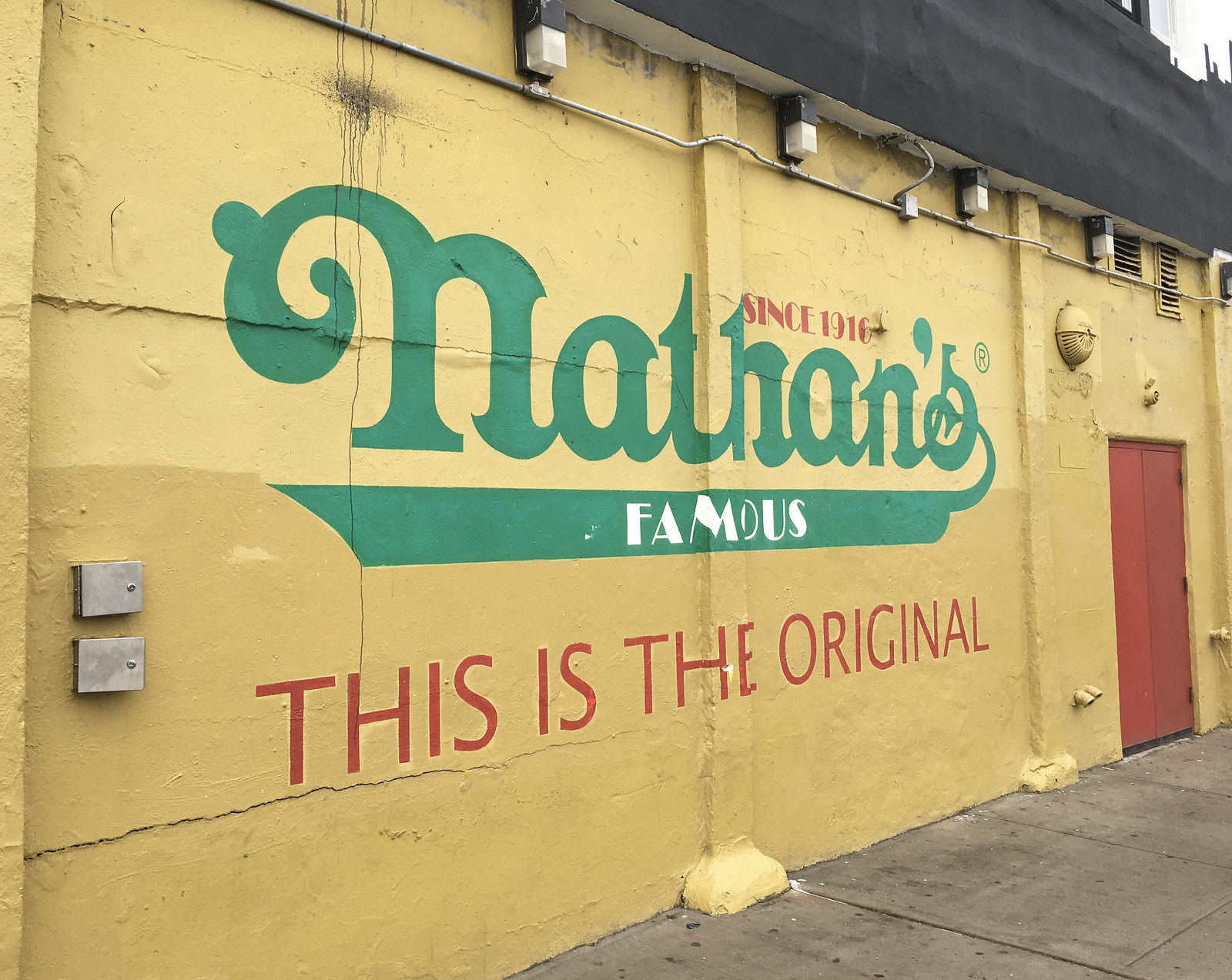 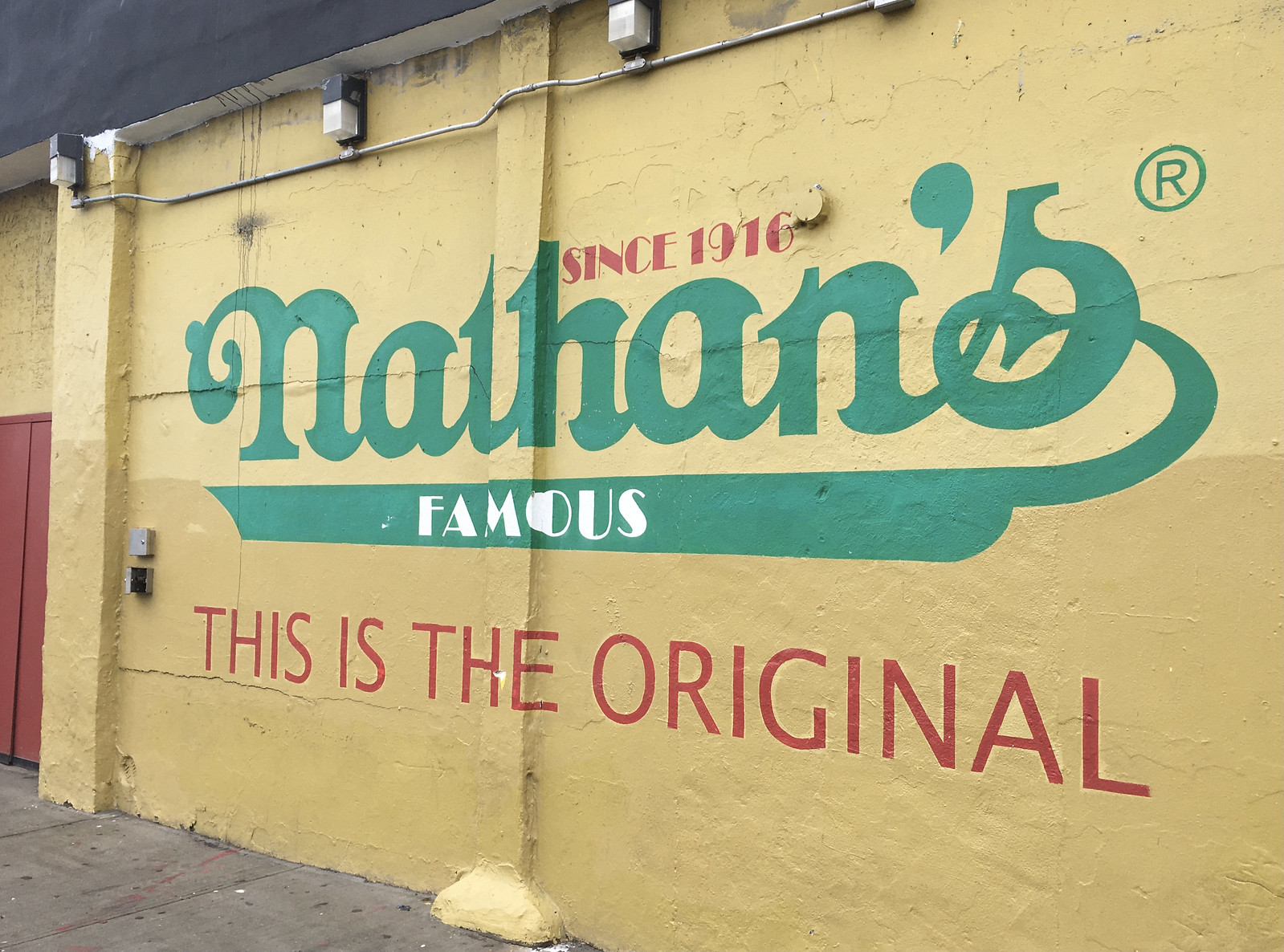 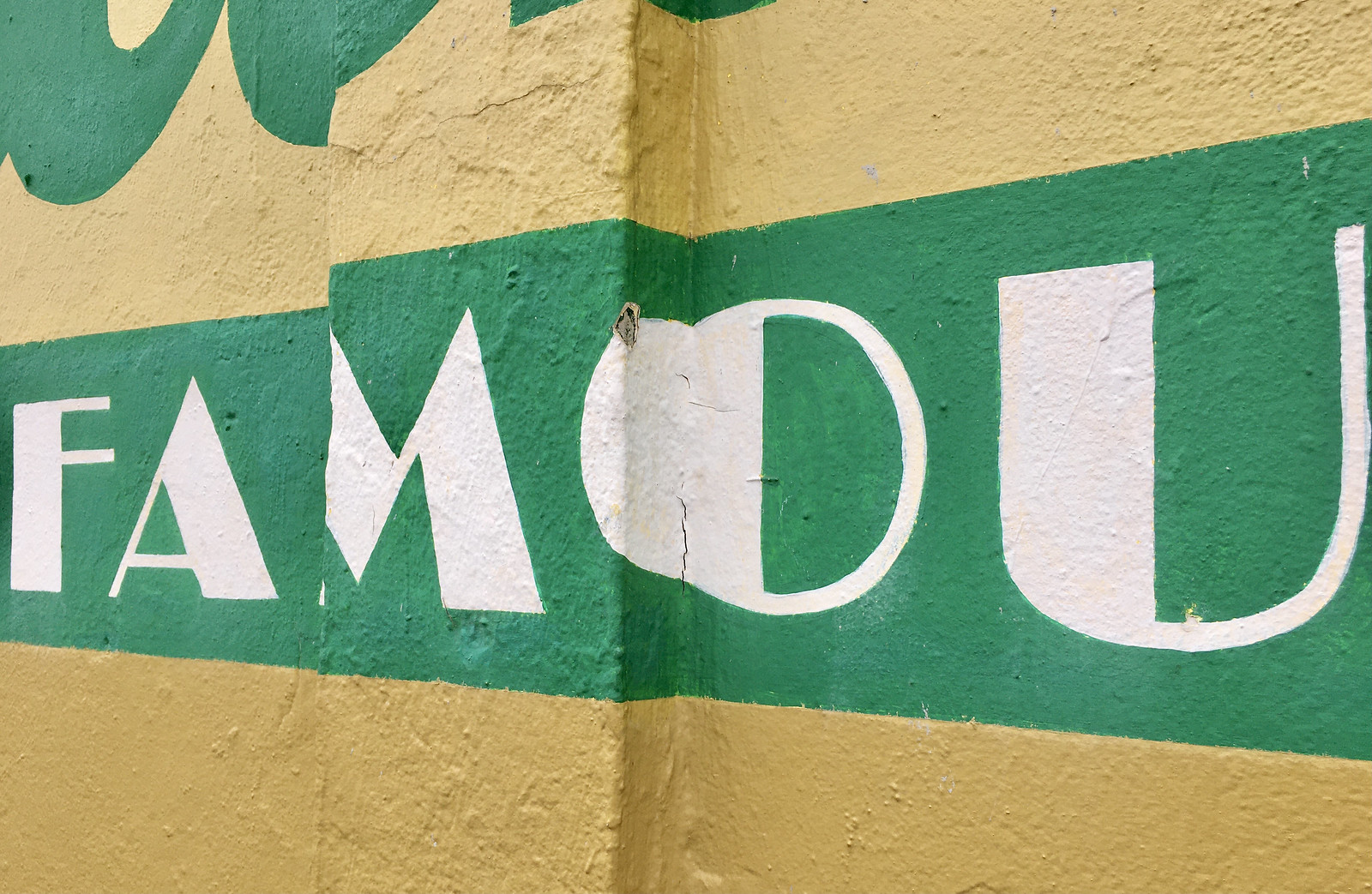 In a related item, the single best thing we saw was a bit of graffiti down the block from Nathan’s: 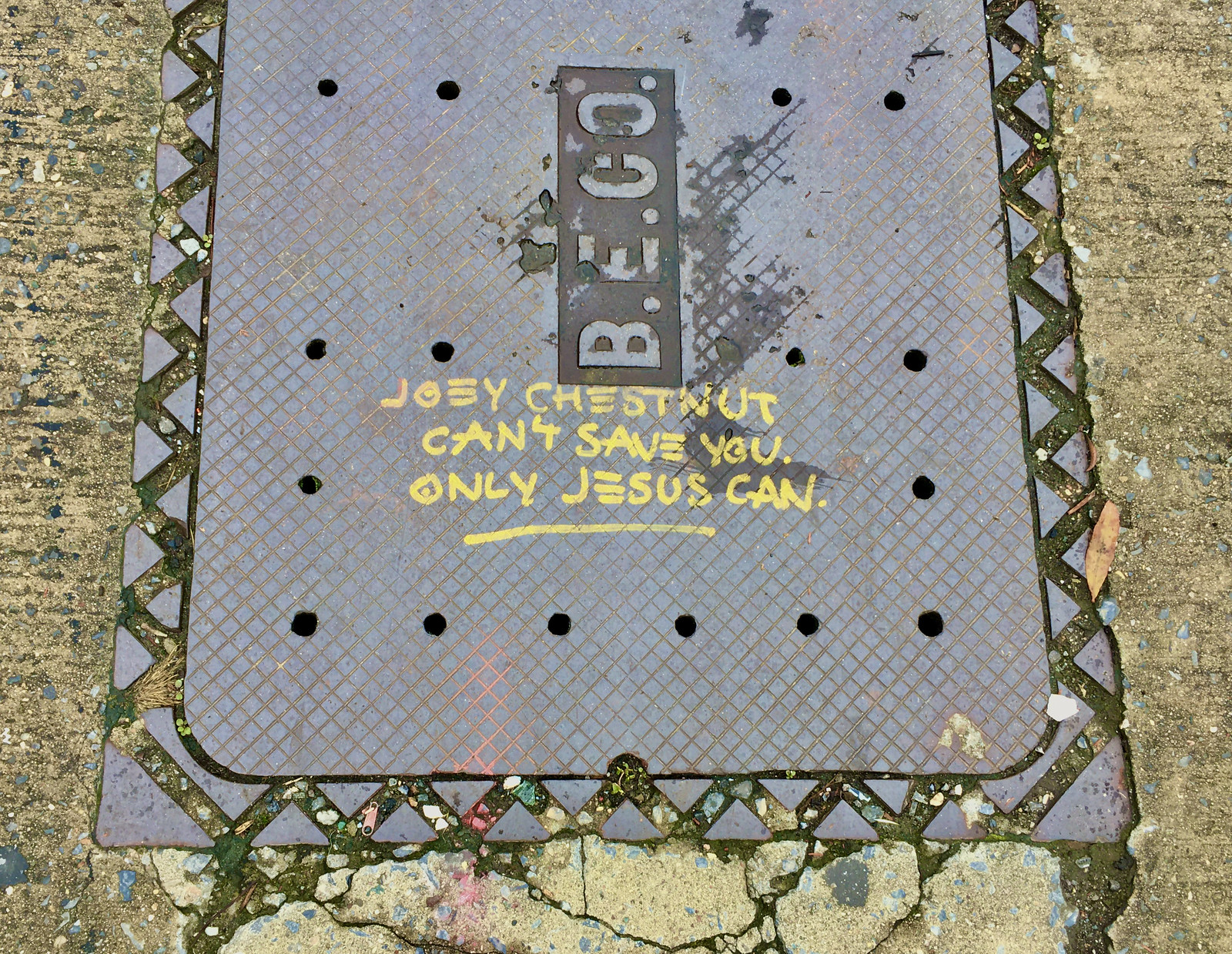 If you don’t understand the graffiti, look here. Aside from the message, I really like how the “E”s and “O”s are rendered. 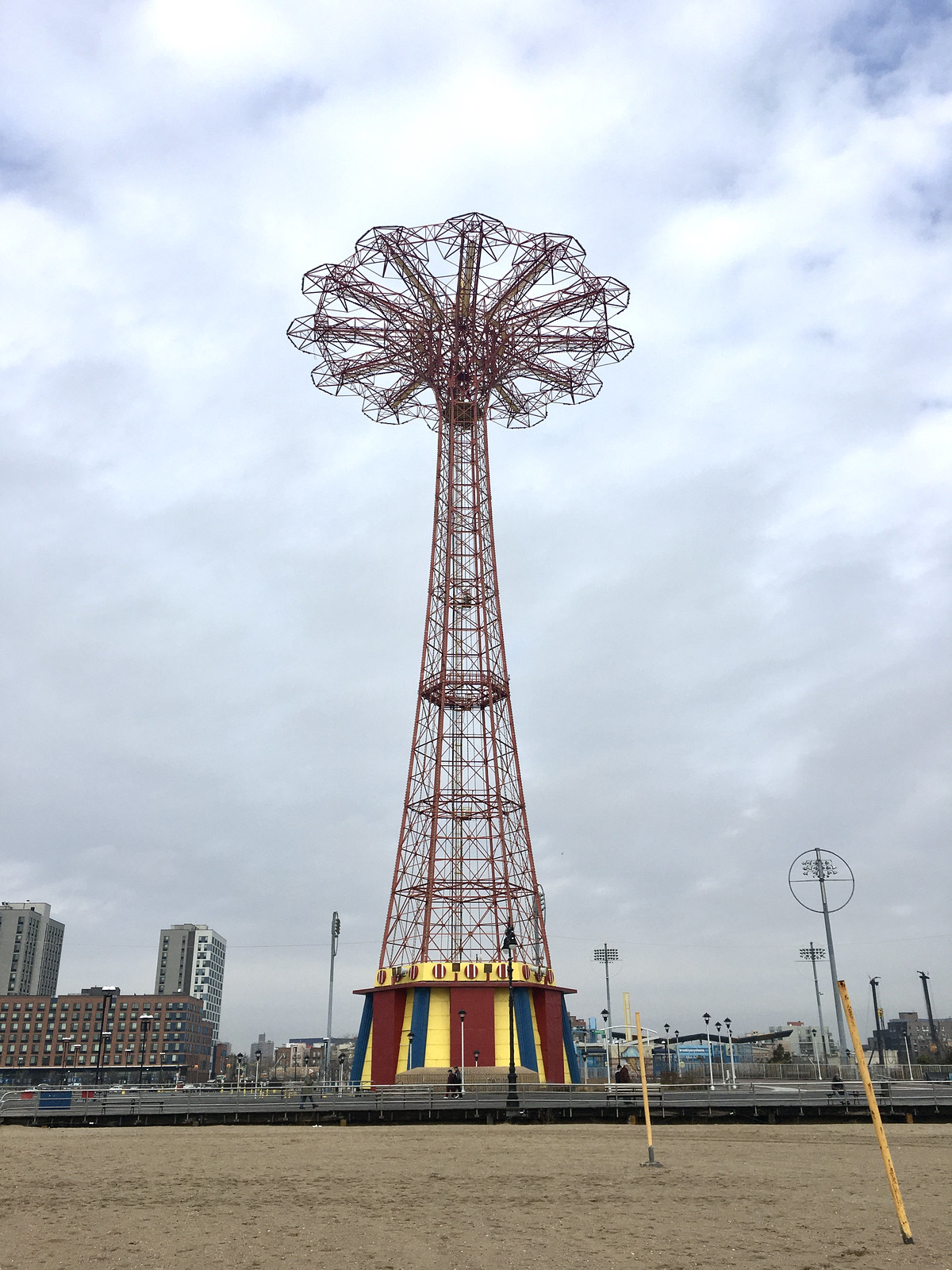 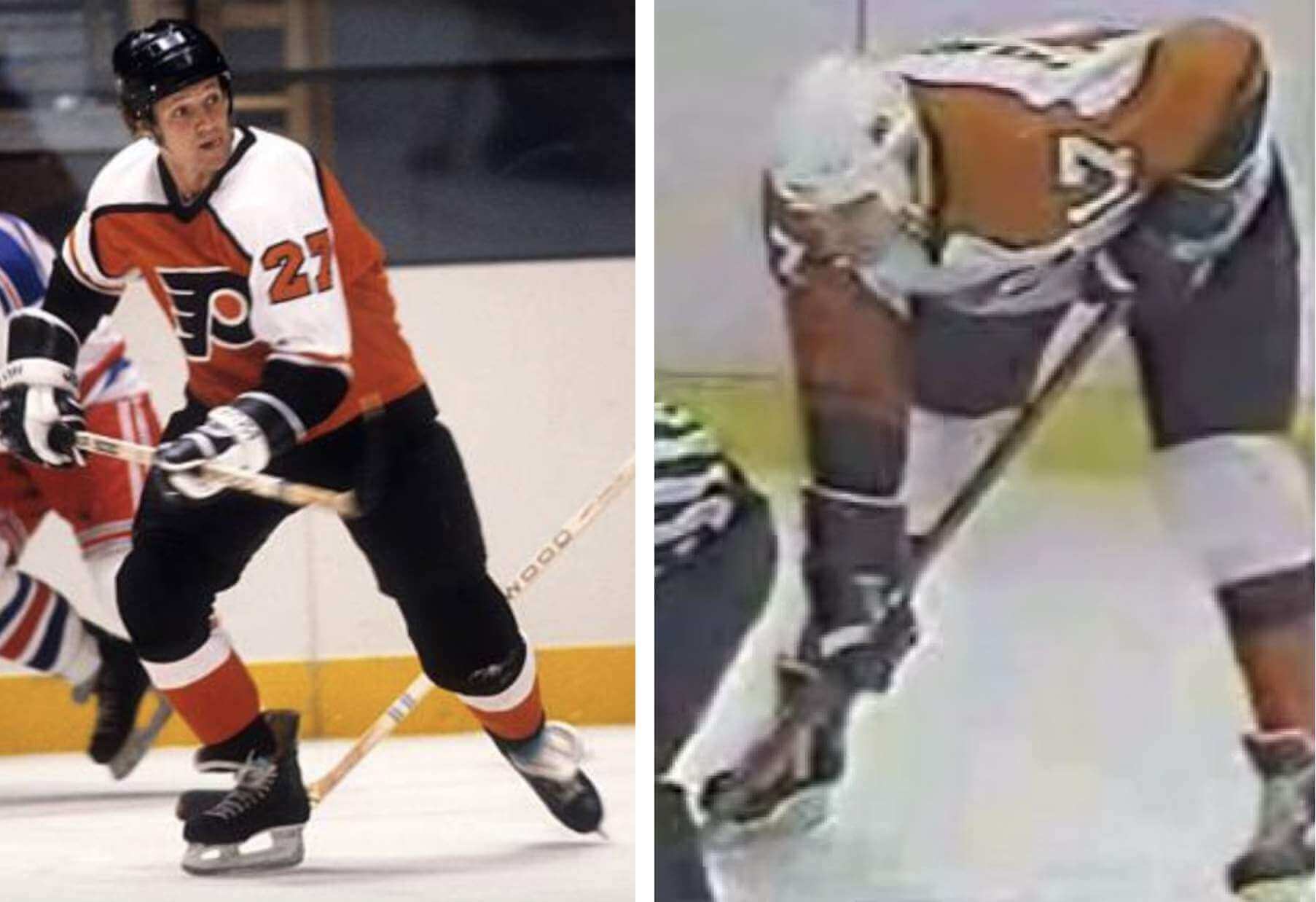 Philly sock shocker: Here’s something I didn’t know: In the 1983 preseason, the Flyers wore black-topped socks on the road and white-topped socks at home. They changed to a more conventional striped design when the regular season started.

(My thanks to William Koslosky for bringing these socks to my attention, and to Twitter-er @Steve_May for explaining their history.)

Baseball News: Reader Geoff Poole came across some snow tubes with “Indians Snow Days” logos on them. Apparently it was a promotion the team ran ran in the 2010-11 and 2011-12 winters.

NFL News: Longtime reader Dan Cichalski thinks he might’ve found the New Jersey dry cleaning shop where the Giants get their game jerseys cleaned and tailored. “I looked closely and saw that the tag says ‘On Field,’ and I recall seeing a blue jersey there a few months ago when I was picking up some dry cleaning,” he writes. … The Ravens are going mono-purple on Sunday against the Rams (thanks, Phil). … Here’s Jason Von Stein’s weekly uni/mascot-themed illustration for this week’s NFL games.

Hockey News: Torpedo Nizhny Novgorod of the KHL threw it back to the 1950s yesterday (from Wade Heidt). … Also from Wade, the OHL’s Sudbury Wolves were missing some jerseys on Wednesday, so some players wore spare jerseys with different numbers and NNOB, and others wore practice jerseys. … The Kings wore Christmas-themed pregame jerseys last night. They’ll be auctioned off to benefit the team’s charitable foundation (from Wade Heidt). … With the annual Winter Classic set to take place tomorrow evening in Minneapolis, game-time temperatures are expected to be below zero.

Soccer News: The African Cup of Nations jerseys for Zimbabwe and Ethiopia have been unveiled. I really dig the sublimated designs (from Trevor Williams).

Grab Bag: Did you know that in the mid-’90s, Ford experimented with adding Lincoln and Mercury stock cars to the NASCAR ranks? (From David Firestone) … The late character actor Frank Vincent appears to be wearing a baseball cap with his own logo at the beginning of this clip about a Sopranos cast softball game (from David C.) … Crest toothpaste has new throwback packaging. 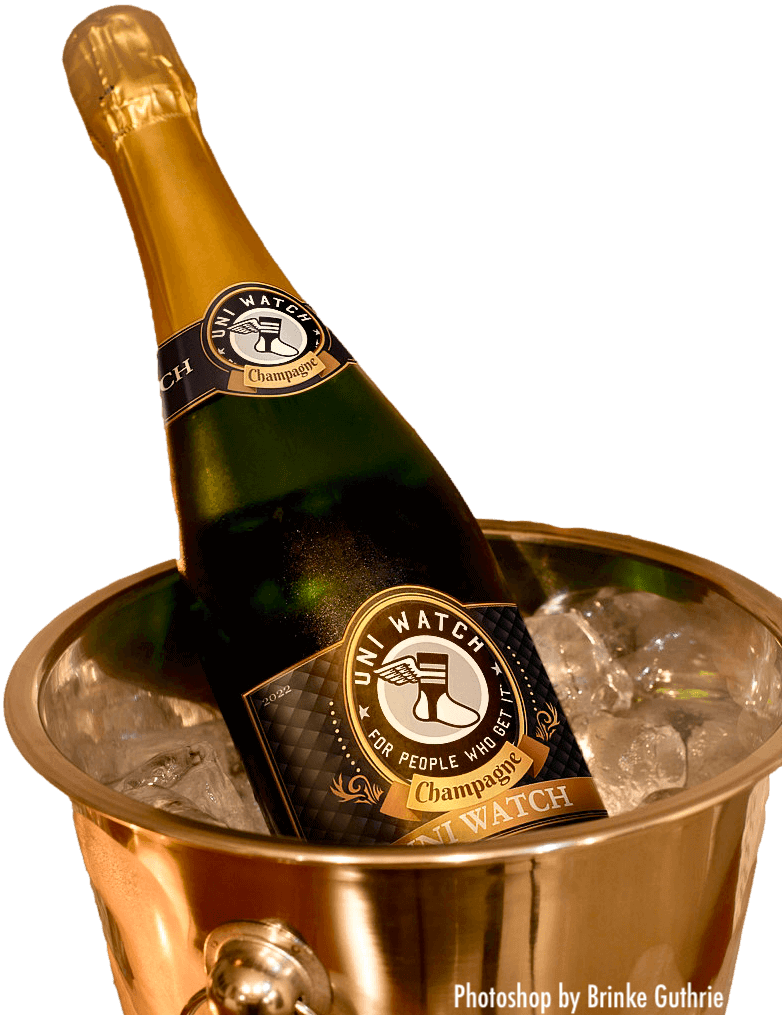 That’s a wrap for this week, this month, and 2021. Obviously, the world still isn’t back to normal, but most of us are nonetheless finding a way to muddle our way through the various challenges and pitfalls that the pandemic continues to throw at us. Uni Watch and its comm-uni-ty are a big part of what keeps me afloat — not just financially but emotionally — so I want to thank you all for that.

We had party plans for tonight and tomorrow, but of course they’ve been cancelled. So instead we’re going to have a few friends over on our porch this afternoon and will also roast a big Puerto Rican-style pernil (pork shoulder), which should make the house smell yummy and keep us fed for days. However you’re planning to spend your New Year’s Eve and New Year’s Day, I hope you have fun and stay safe.

Phil will have his usual weekend content tomorrow and Sunday, so enjoy that and I’ll see you back here next year. — Paul

Happy New Year, thanks for your continued efforts to keep us all entertained and informed – best wishes.

All the Jersey Shore beaches I go to rake the beach daily during the summer. They do it with a big rake attachment on a tractor though. It’s not for litter containment.

Huh — I love the word penultimate but for some reason didn’t think of using it in today’s post!

Anyone else want (have) to know? What’s your favorite word?

Was thinking the same thing about penultimate!

Does anybody else agree that the music city bowl has the worst end zones of any bowl. The titans logo always shows through every year.

All Jersey Shore beaches are absolutely raked for litter collection. That’s the only functional reason worth the cost of doing it.

Happy New Year! Just a suggestion, you may want to bring Mary along as a lookout if you intend to do some sign modification. In any case, be safe!

The Philadelphia Flyers had redesigned their jerseys while they were wearing Cooperalls. Took them a couple of sock designs before settling on a striping pattern to go with it when they abandoned the Cooperalls.

The Flyers are not alone in this trial sock striping before staying with a design when switching back from Cooperalls. I think back to 1987-88 when major junior returned to wearing short pants and socks from Cooperalls. Many of the jerseys for teams had never been worn with socks. The teams had been wearing Cooperalls for a number of seasons.

I remember the WHL’s Medicine Hat Tigers switching sock striping during the season. The Brandon Wheat Kings started out wearing yellow socks. That did not last long before switching to black socks.

Happy New Year Paul, Phil, the rest of the team and everyone out there. Reading Uni-Watch every morning has been a treasured moment of normalcy.

It’s vs its is one of my favourite Apostrophe Catastrophes. See it way more than you should on signage.

Thank you for sharing the NFL artwork Paul.

I hope everyone has a wonderful New Year.

The Giants have been using Parks Cleaners in Rutherford, NJ for decades. This tiny dry cleaner tended to most of the teams based in The Meadowlands at one time, now it might just be the Giants.
The business has been there forever.

Happy New Year to Paul, Phil, the rest of the Uni Watch team, and the entire Uni community!

There are lots of pigeons and doves where I work. Also, we have a few hawks and owls around as well. You can sometimes hear the owls hooting at night or early in the morning. I was out for a workout one morning and saw something sitting on a stairwell. As I got closer, I saw that it was a baby owl. I knew that the parent was close by. I saw it sitting on top of a goalpost about 20 yards away staring at me. I turned and went back the way that I’d come.

Another time, I was working the night shift. I came out of my office and right in front of me about six feet away was an owl sitting on the railing. We looked at each other for a few seconds then he spread his wings and flew about 50 feet away to another railing. His wingspan was quite impressive.

Thanks to David Firestone for sharing that bit about the notch-back Mercury Cougar
I was not aware that particular body style was ever morphed into a Cup car.
I still lament that the Lincoln experiment didn’t pan out. Instead, Ford gave us the Taurus race car…Woof.

The Cougar doesn’t strike me as an aerodynamic car. The Mark VIII was aerodynamic, but not long for the world.

A note of clarification: Ford didn’t sanction these body tests. The team owners (Kranefuss-Haas and Yarborough) were looking for some kind of technical edge because Ford Thunderbird teams were so incredibly fast in the late 80s but their edge had worn off by the early 90s.

I always thought the John Andretti Lincoln was pretty cool, but evidently it wasn’t fast enough to warrant going away from the T-Bird.

The regrettable thing about this episode is that it was the first step towards the “spec” era of NASCAR, in that you’re given one of three or four car models to run with. You can’t expect to “run what you brung” anymore because you’re liable to be penalized (i.e., running slow) by running an unproven design instead of being rewarded (i.e., running fast) for innovation.

The NASCAR owners saw what happened in Indy Car back in the mid-90s when Bobby Rahal missed an Indy 500 because of the poor performance of the RH001 chassis, then Team Penske missed the race the following year because the Penske chassis was slow if they didn’t run the Mercedes pushrod engine.

Today, in both IndyCar and NASCAR, you only have a handful of permutations to worry about.

The Indians Snow Days thing was a cool idea. They turned the ballpark into a winter park with sledding and skating. Google Image Search for it makes it look like a good time, must not have made much money though

Paul, thank you for another entertaining year of uniwatching. Happy New Year to you, Mary, Phil, Brinke, Jimmer and everyone else who contributes to this great site.

I love pernil. Any plans to post your recipe?

Happy New Year to all the uni-watchers. Somehow 2021 was worse than 2020 so here’s hoping we can only go up from here. I will be making Hoppin’ John tomorrow to start the year off right.

That tagger is all over the place in Long Island City but usually uses “Only Jesus Matters” as the copy. Sometimes these appear in marker like you saw and sometimes painted stencil. Perhaps because of the provocative use of “Matters,” I’ve interpreted the rendering of the letter E with three horizontal lines and no vertical line as a poke at the Biden campaign posters. Anyway, I didn’t know his range extended to Coney Island!