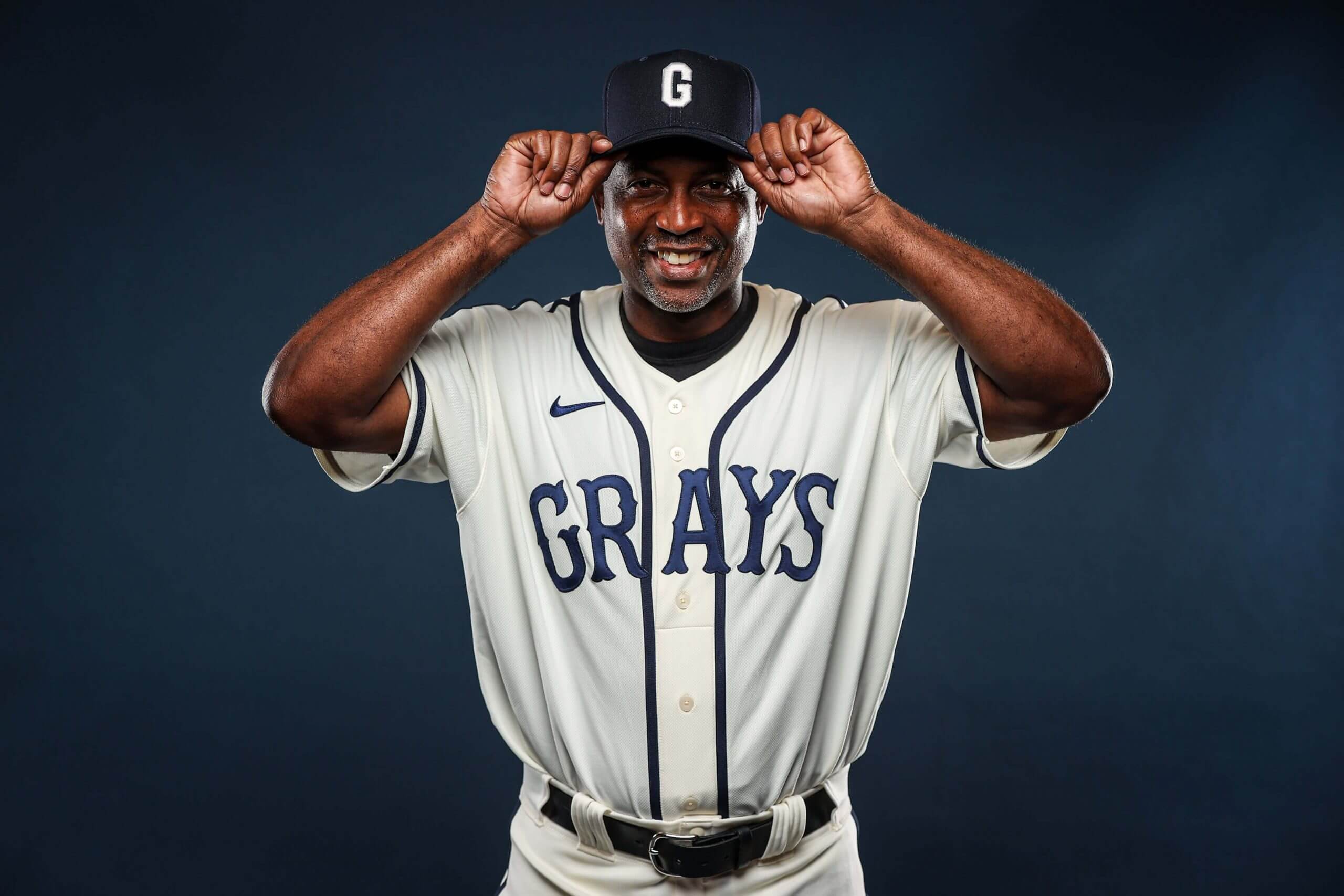 The Pirates donned the Grays unis last night in Pittsburgh.  The Negro League unis always look terrific, which, putting history aside for a moment, is likely due to them being frozen in time of that era. Those franchises weren’t ever really aesthetically corrupted by polyester or cookie cutter stadiums or astroturf that came decades later. I love when teams break these out, and it’s great to see Major League Baseball officially recognizing these teams and players as apart of baseball history. Truly a throwback.

The club honored the Homestead Grays — a team with a rich history and a few of the greatest players in baseball history — at PNC Park ahead of their Negro League Baseball Legacy Game with the Cardinals. Pittsburgh donned cream and navy Grays jerseys with “G” hats for the contest, while festivities at the ballpark also included a giveaway of Grays T-shirts, on-field Grays insignia in the foul-ground grass and a display of pieces of Negro Leagues history in the left-field corner.

Friday marked the first time since 2017 the Pirates donned the Homestead Grays uniforms in an MLB game, and the moment holds an enhanced significance after a recent MLB decision.
Last December, MLB announced that it officially recognized seven professional Negro Leagues that operated during 1920-1948 as Major Leagues. The Grays played in three recognized Negro Leagues: the American Negro League (1929), the East-West League (1932) and the National Negro League (1935-1948).

They looked great in action, too: 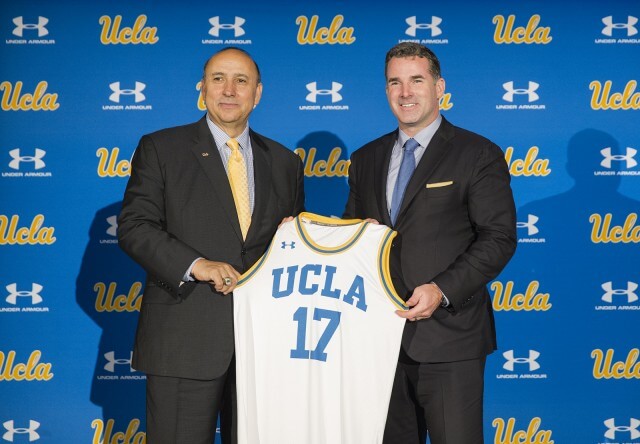 Under Armour attempted to get a lawsuit brought by UCLA dismissed, but a Superior Court judge in Los Angeles rejected the move this week. UCLA is seeking more than $200 million in damages.

UCLA sued Under Armour in August 2020, alleging breach of contract after the apparel company reneged on its 15-year, $280-million sponsorship deal with the school that was the most lucrative in the history of college sports.

Under Armour told the school it was invoking the force majeure clause of the contract in the wake of the COVID-19 pandemic that halted college sports and that the UCLA baseball team had completed fewer than 50% of its games, a requirement for one of its core teams.

There appears to have been some issues in Atlanta with batting helmets last night.

@UniWatch The second rogue helmet logo of the day… this one on Duvall pic.twitter.com/g1SWgs7V3F

@UniWatch A is for Adam Duvall, or is it Angled, as the A on his Braves helmet is crooked and/or falling off pic.twitter.com/QDLydh0X0W

I’ve stared at this announcement, blinking, trying to figure out just what in the hell it’s supposed to be saying. This is beyond ridiculous.

JUST IN: FAU has officially changed the title of their head football coach.

The team’s leader will now be called the “Hagerty Family Head Football Coach” after the Owls received a $2.5M gift from Michael and Michelle Hagerty.

I remember way, way back ago, Paul and I started a little side project called “Ditch the Black”, trying to get the Mets to jettison their BFBS unis. I’ve always hated black in their uniform, largely because I thought the pinstripe versions were so crisp. I know Steve Cohen and some younger fans now view them as classics, which is a bit lost on me.

Despite being a Yankees fan myself, I’ve never felt the need to root against the Mets (that’s more common the other way around), but man, who can possibly figure out what’s happening in Flushing right now? I think this explanation might be as good as any:

The Mets are 7-19 and have gone from 7 games over .500 with a 3.5 game division lead to 5 games under and trailing by 7.5 games since bring back the black for black's sake jerseys, including an 0-2 record in said jerseys. @UniWatch https://t.co/8nCvbq78aE

Cristiano Ronaldo, after a brief flirtation with Man City, is headed back to Manchester United. But, unless they get special permission from the Premier League, he will have to wear a different number this time around.

Premier League rules state that Edinson Cavani must keep #mufc's No.7 shirt for the whole season. If Cristiano Ronaldo wants the No.7 shirt, Cavani must leave or United must get special dispensation from the Premier League board #mulive [@DaleJohnsonESPN]

Hawaii will honor Colt Brennan this season with a helmet decal.  Brennan passed away this May at the young age of 37.

Coaching positions, like many college jobs, are endowed by individuals and families all the time. Almost every coach in the Ivy League is paid and titled that way, for example.

What happened at FAU is really not that strange.

i will concede that it is not uncommon, but it is strange as hell.

for one thing, perhaps philanthropists could try donating money without needing to become a sub-brand of the organization to which they are donating. if one were to donate enough money to own the rights to the coach, i’m sure there is some kind of plaque involved, likely a dinner or gala (perhaps an annual one), and probably you are frequently talked about in high esteem, and invited as an honored guest to most relevant events. can’t that be enough recognition? while the endowment or donation may (or may not) be an indirect contributing factor to the success of X (in this case a football coach), isn’t it the coaches themselves, and the athletes they coach who are truly responsible for their success? but now they must go about their job with this little parasite attached to that success. i have an in-law who does IT for clemson athletics, and when they won the national championship, he got a ring. it is gigantic and gaudy and doesn’t even remotely fit his finger, not to mention he can’t even properly close his grip with it on, yet he wears it everywhere and is sure to mention how he won the national championship that year. sure, if he wasn’t there, perhaps an integral email may have been lost in the ether, or the digital copy of the playbook maybe have glitched out at some point, but this guy did not win the national championship by any practical metric. i feel the same about endowments (i do admit that an influx of money can make a difference in an athletic program, however, which can contribute to success, but at the end of the day, talent, strategy, and hard work are what win games).

now, i am not ordinarily bothered by this situation because – and i don’t follow college football closely enough to know this for sure, but – i don’t think the broadcasters refer to them by their full endowment title during the games, so at the end of the day, i don’t really care. it’s more of a nuisance on principal.

Yeah, I guess it’s pretty much universally common for university department heads, professorships, etc. to be named after an individual or family who endowed them. So I guess no real reason not to extend the practice to positions in the athletic department. It sounds goofy but I guess it’s harmless.

We should just be glad it’s not the Quicken Loans Head Football Coach or something like that anywhere. At least not yet.

Why on earth do they mess with contrived nonsense like City Connect unis when every MLB team could tap into some local history of Negro League uniforms? Classy, historic, educational, and always a good look.

If you say that out loud three times, it comes true. Please don’t.

Regarding the Mets’ black jerseys… are they trying to emulate the Colorado Rockies? Because as of this morning the Amazin’s have now dropped to only 2 games ahead of the Rox in the overall standings.

Well, now Ekdahl’s done it. Suddenly I can’t stop thinking about what changes Negro League unis might’ve gone through if the teams had survived into the ’70s. And it’s AWESOME.

I worked in Manhattan in the 80s and 90s, where so many people wore black, so New York’s the one town where I don’t mind BFBS. More here: link

Imagine if the American League and National League had Black players throughout the first half of the 20th century and the Negro Leagues were unnecessary. To see Babe Ruth and Hank Greenberg playing with or against Josh Gibson and Satchel Paige…

The helmet decal issues must have something to do with the heat and humidity around the country; no pics, but the Blue Jays had a couple players last night in Detroit with decals slipping off (flying away?). Never used to see this kind of stuff on batting helmets; is it because they used to be painted on?

AFAIK helmet logos have been decals (like football helmets) for quite a while. The difference recently has been the 3D logos such as worn by Atlanta and Toronto. I guess these use a different type of adhesive and my own experience trying to replicate them on minis is that the 3D shape makes them harder to stick firmly.

Cannot unsee that uncentered A on the Grays jersey. C’mon man!

Reason #115 why I love my wife: while watching Blue Jays-Tigers game tonight she lamented the pajama pants look. “They don’t look like baseball players when they’re dressed like that! And another thing…the Red Sox should be wearing red socks!” I think she’s a keeper.

Why isn’t it if one team is throwing back to another era, the opponent is also? Wouldn’t it make an aesthetic statement?

Jerry Koosman jersey in the background had a majestic logo. Wrong for two reasons.