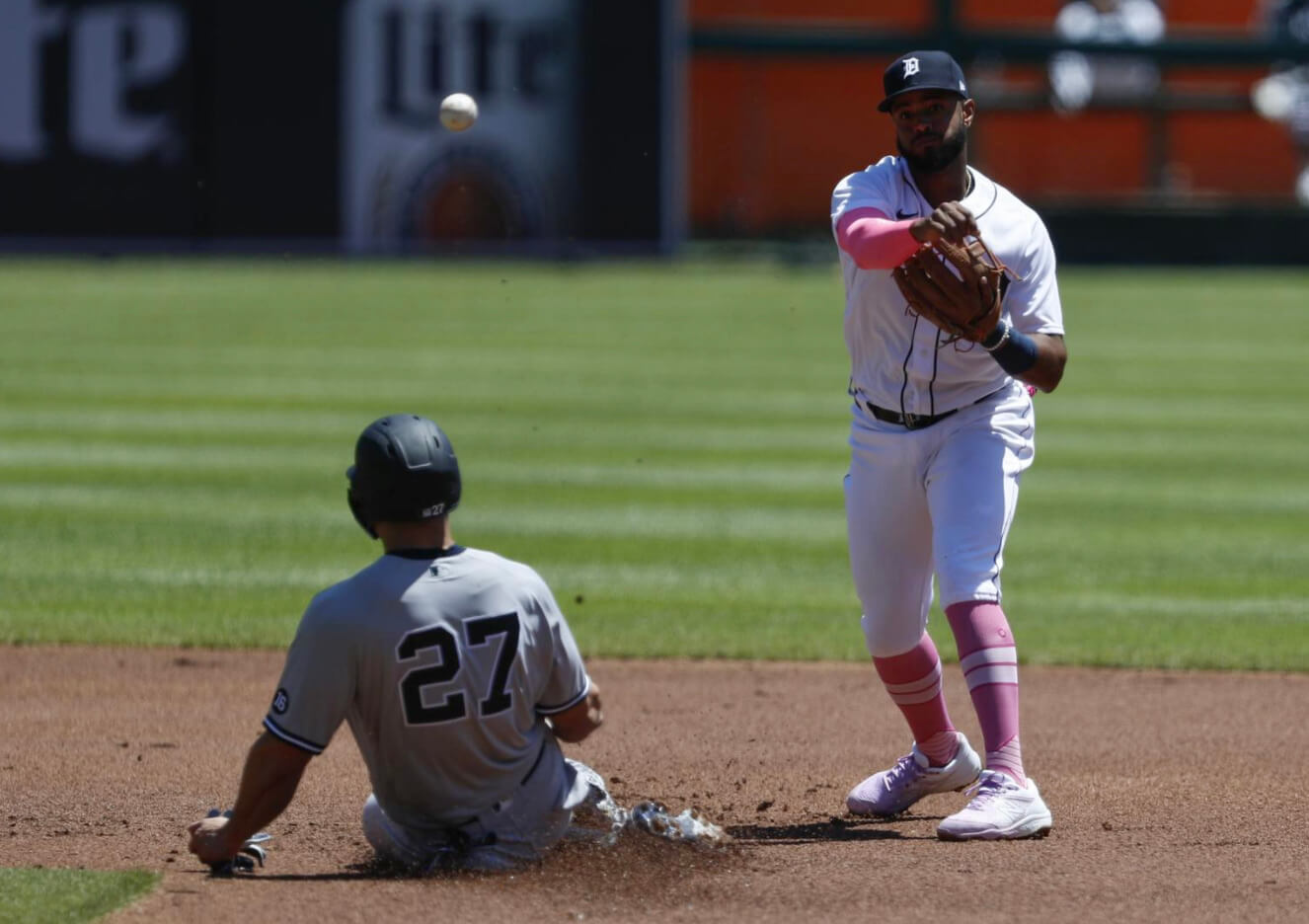 This is a holiday weekend, but not just for the holiday you’re probably thinking of. Yesterday was Mother’s Day in the Dominican Republic, so many Dominican MLB players — including Tigers second baseman Willi Castro, shown above — wore pink accessories.

Other players who wore pink yesterday included Castro’s teammate Jeimer Candelario; Nelson Cruz of the Twins; José Ramírez of Cleveland; Ketel Marte of the Diamondbacks; and Vlad Guerrero Jr. of the Blue Jays. Those players appear, in the same order I just listed them, in these screen shots: 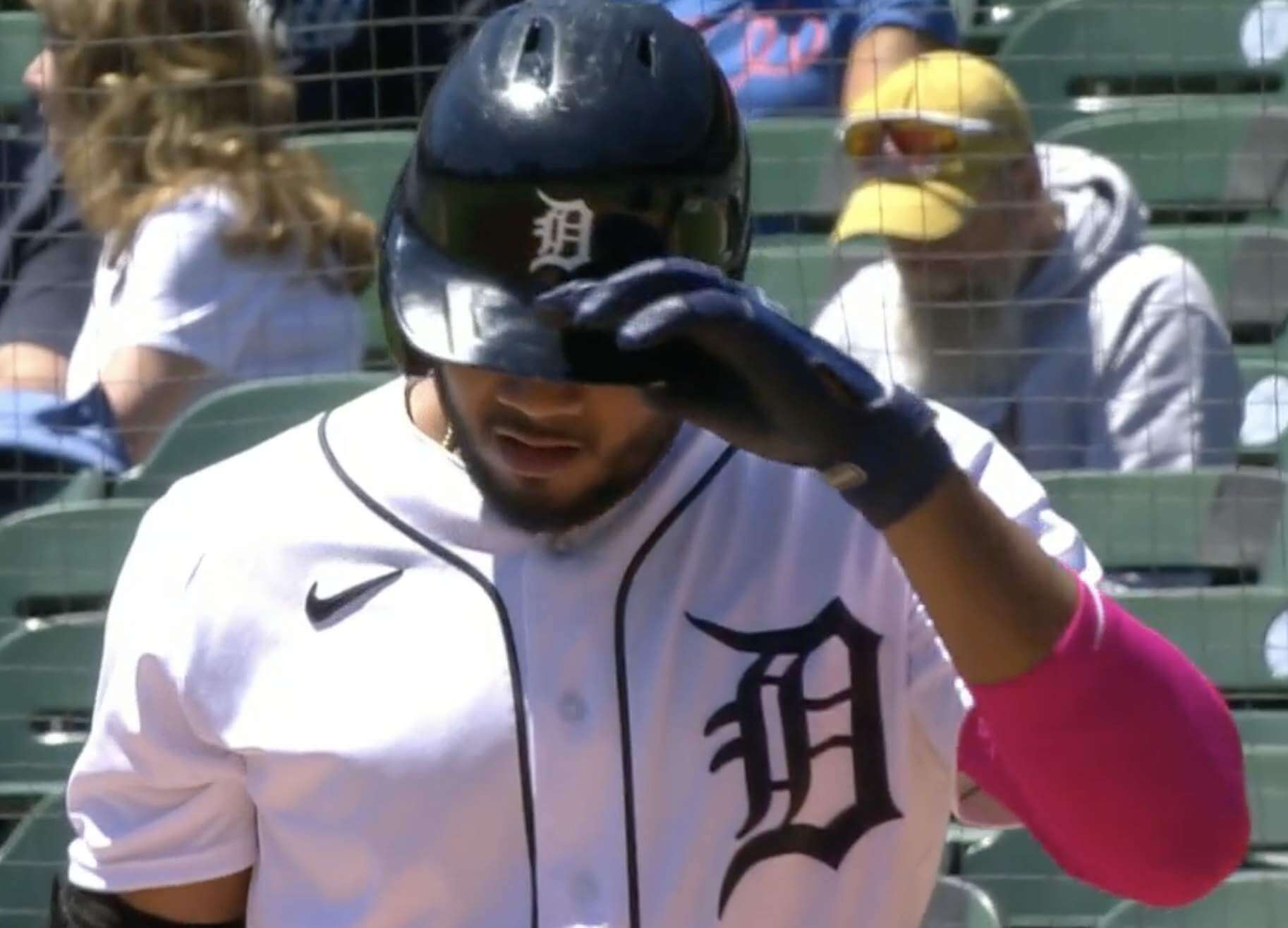 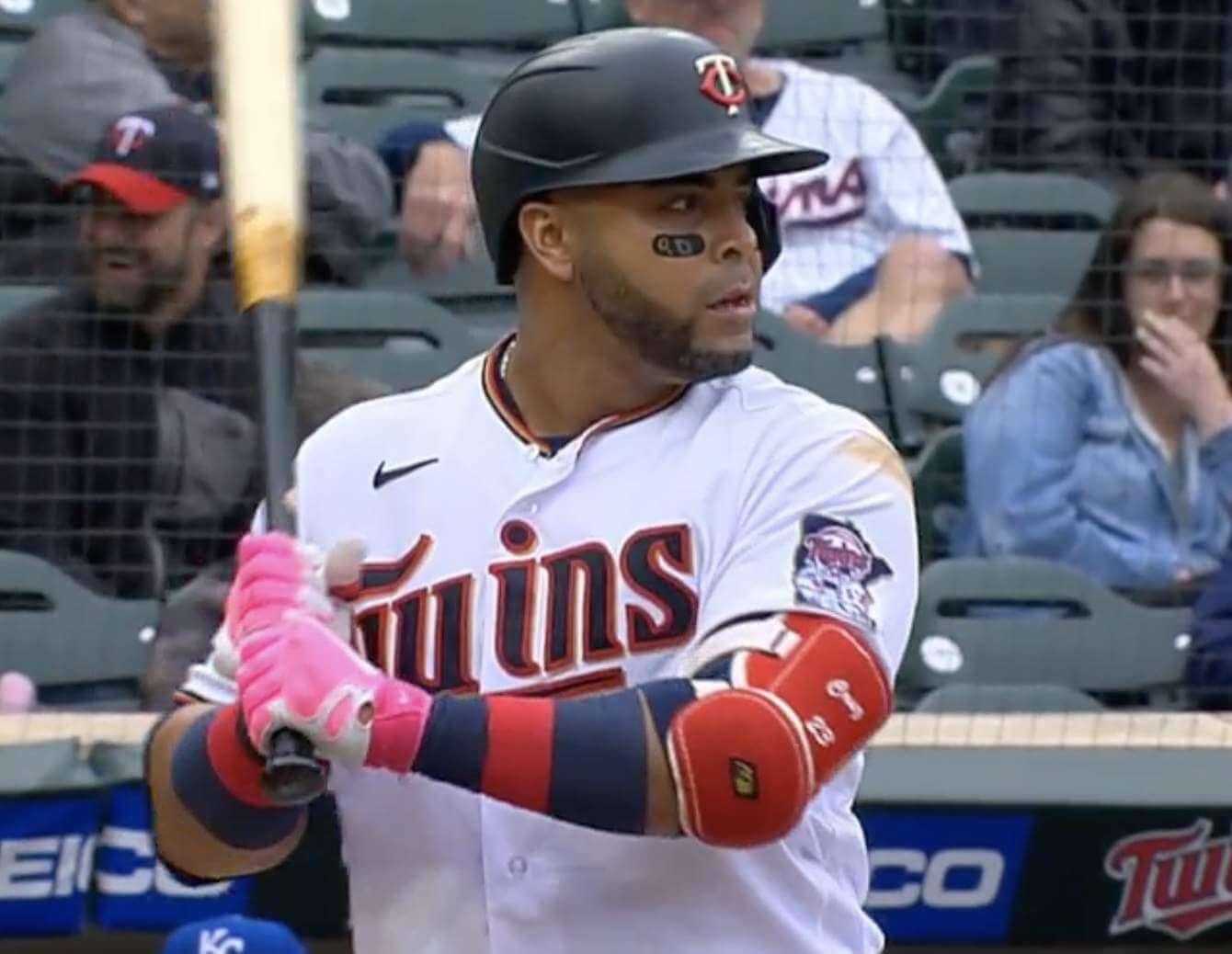 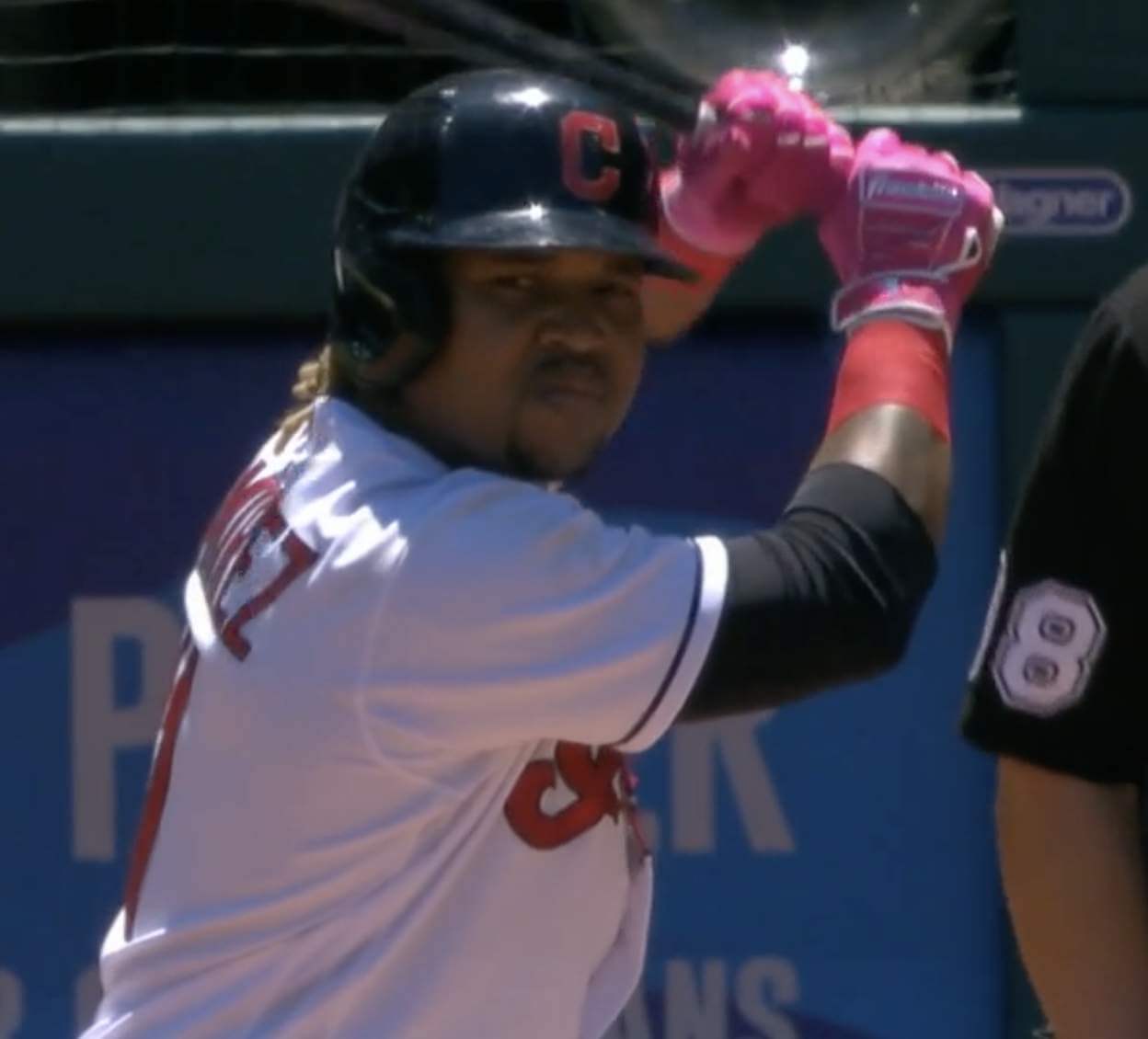 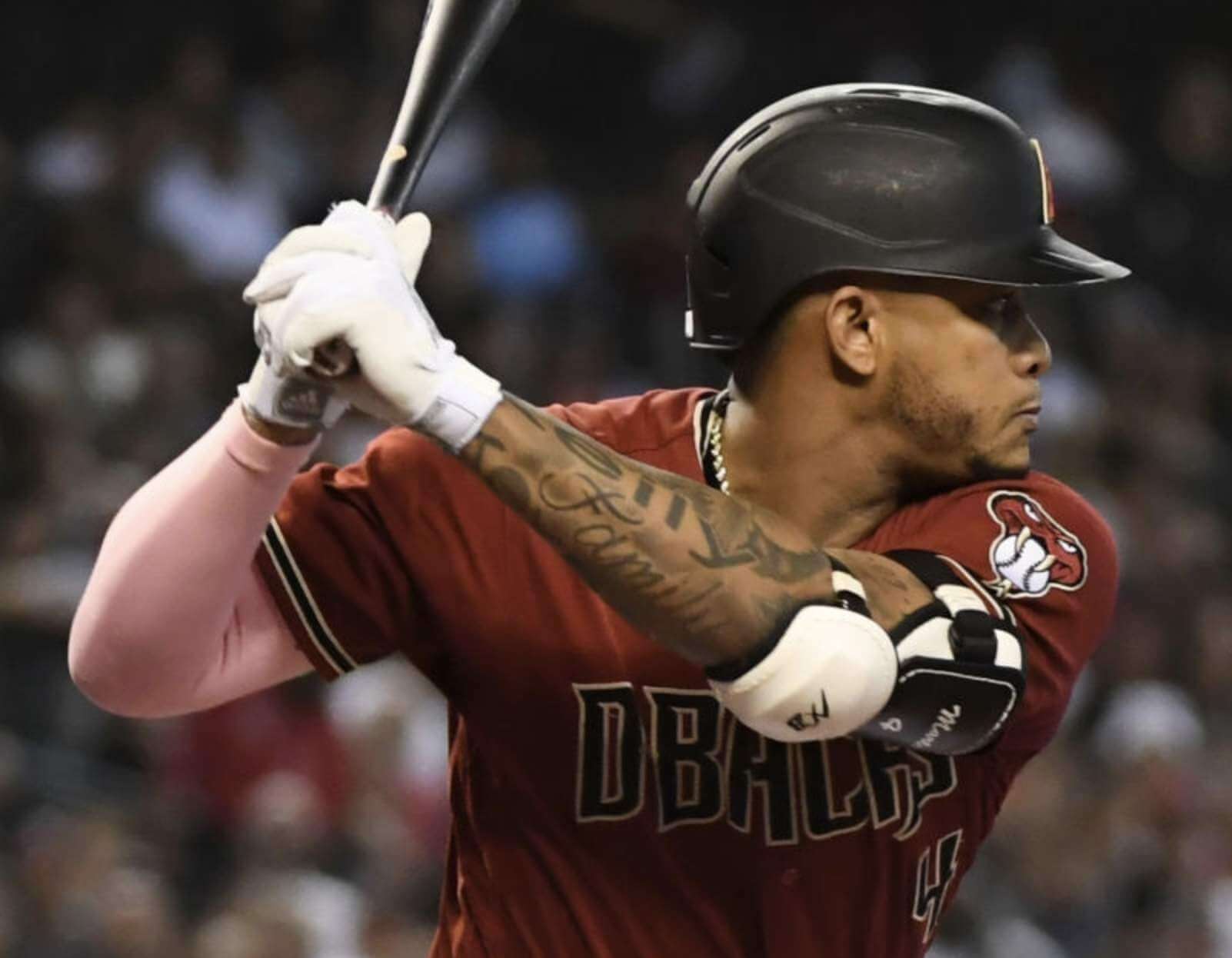 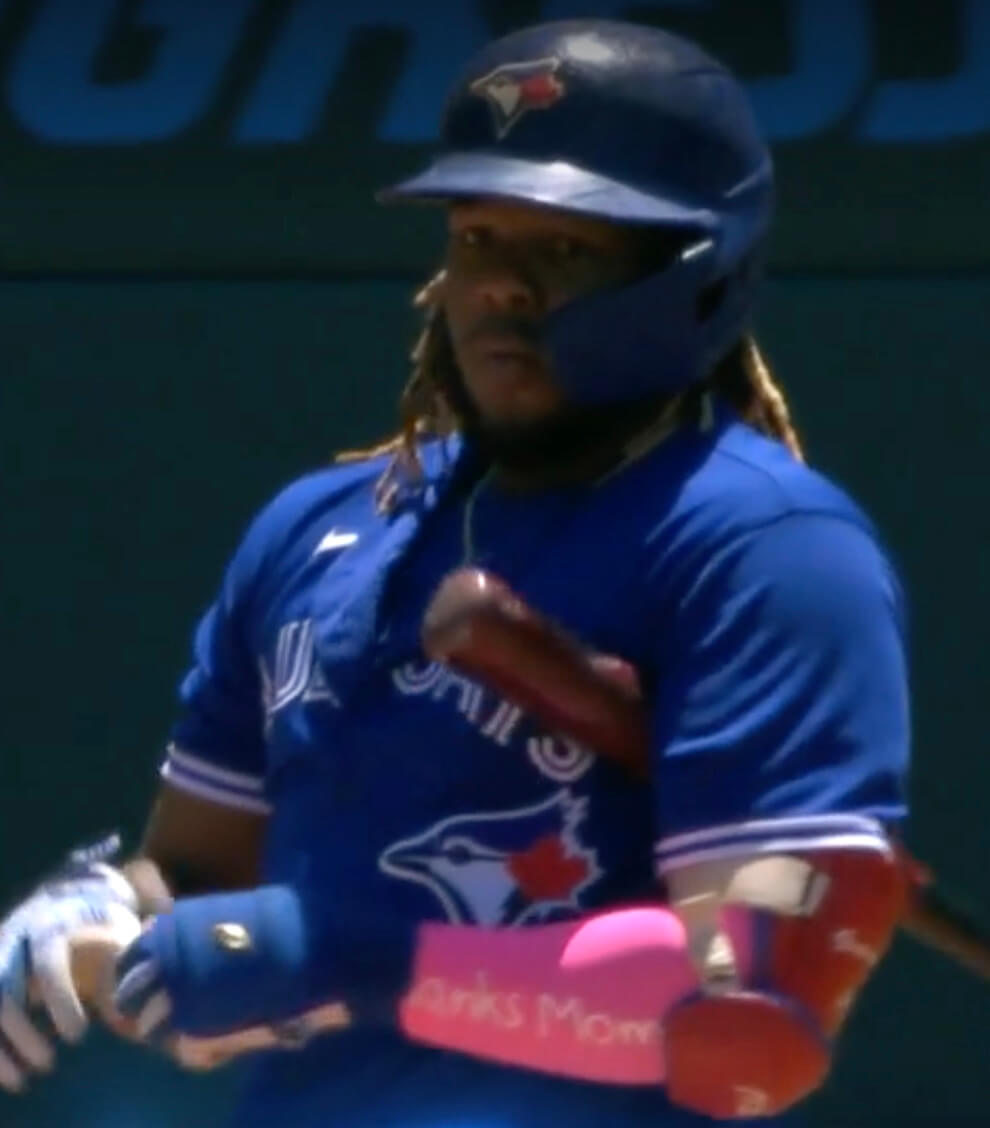 I’m sure there were other players doing this who I missed. Feel free to list them in the comments.

(My thanks to the many contributors who brought these players to my attention.) 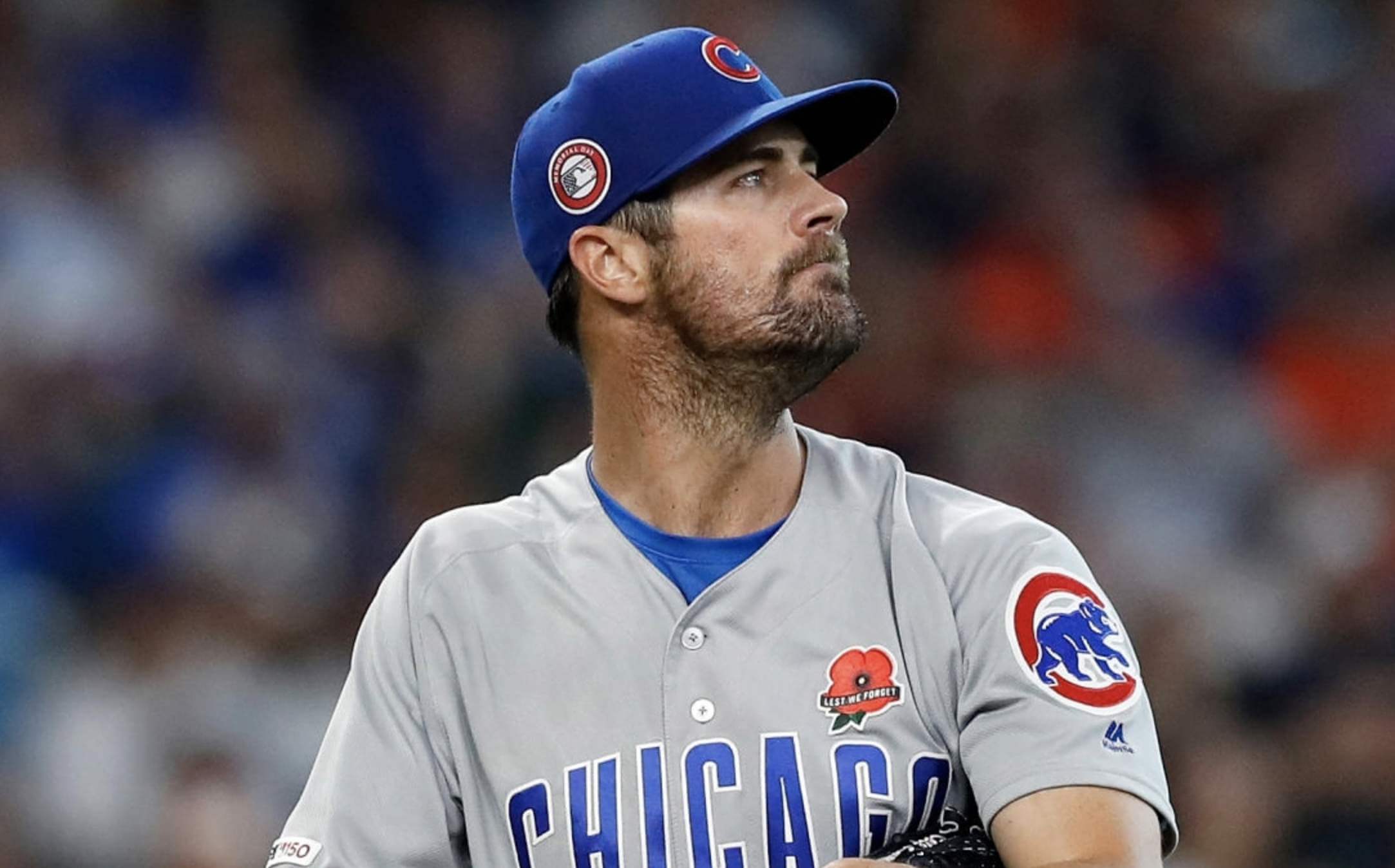 And speaking of holidays: Today is Memorial Day — the day we honor the sacrifice made by military members who’ve died in service to their country. For many years, MLB teams wore camouflage uniforms for this holiday (an inappropriate gesture, since Memorial Day is not a pro-military day but rather a solemn day of mourning), but in 2019 they changed to wearing two patches: a “Lest We Forget” poppy on the jersey and a “Memorial Day” roundel on the cap (see above). Much better.

The NBA and NHL have playoff games today. I am not aware of either of them making any uni-related acknowledgments of the holiday.

If you have the day off, enjoy your free time; if you’re working, thanks for keeping the world spinning while the rest of us take a break; and if you’re mourning a fallen friend or relative today, please accept my sincere condolences. — Paul

Paul, because I know you care about such things, as I do:

Thanks, Matt — but what are you referring to or correcting?

So it should have been directed at me and/or Phil.

Have a peaceful Memorial Day, everyone. May everything we do today (and every day) make this world a better place so those who have fallen will not have sacrificed in vain.

“Because the ball will not travel far when solidly hit, ball chasing and base running have been eliminated.”

Not on my lawn, Wiffle Ball. And not in MLW.
Chase those balls. Run those bases. Get some exercise!

That’s a very nice sentiment at the end of your post, Paul. Well said.

I really miss a time when ‘real world’ concerns like holidays, life and death, etc. were not reflected on baseball uniforms.

I liked it when sports existing an impenetrable bubble that you could always count on as a refuge from larger issues or concerns. It seems like all sports teams are apologizing and trying to make up lost time for not being serious enough about loving mothers or recognizing that people die.

That’s not what I need you for, sports.

Here’s a question for the Uni-verse…

Can anyone tell me what brand of elbow guard the Padres’ Jake Cronenworth is wearing? I’ve been around baseball forever and I don’t recognize it.

I’d never heard of them before.

While surely a coincidence, seeing a #27 in today’s post is of special significance to me; it is the number of graduates from my high school who died while on active duty during the Vietnam War.
The number appears on all of the school’s sports uniforms as a permanent memorial to their service and sacrifice.