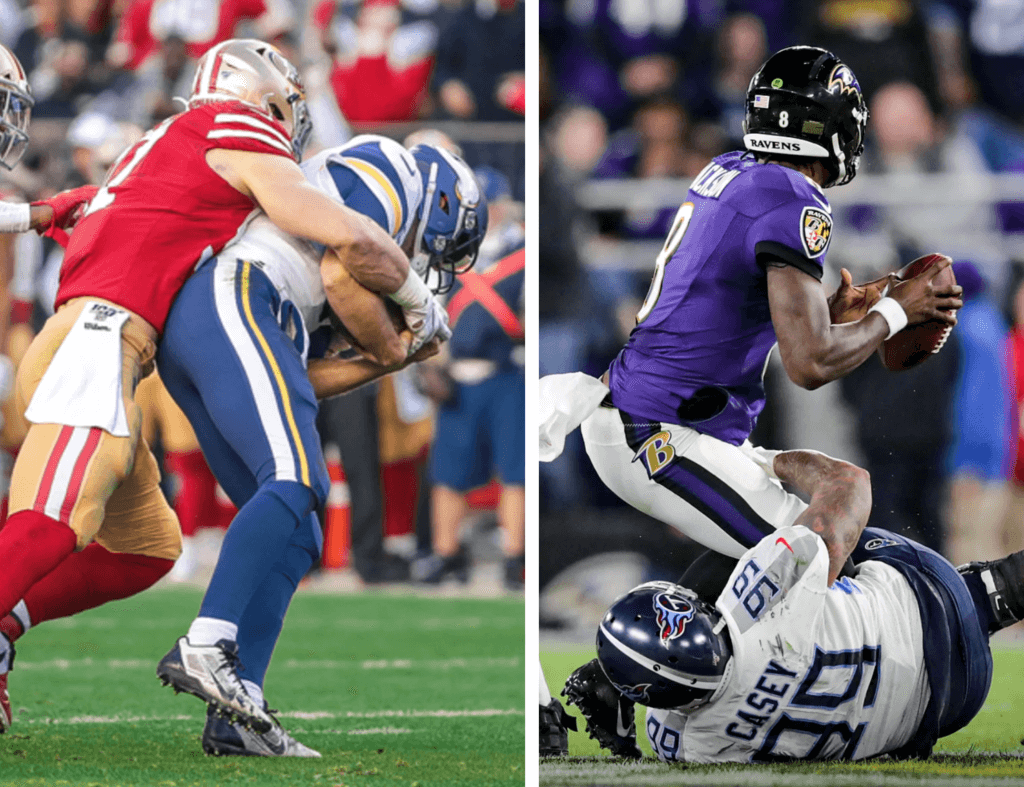 Good morning! Paul here, filling in for Phil, who’s dealing with a family situation. Greetings from Florida, where the Tugboat Captain and I are spending a few days visiting her parents. It feels very weird to be wearing shorts in January!

Yesterday was a very, very good day in the NFL, at least from my perspective. Consider:

• My favorite team, the 49ers, won their playoff game against the Vikings and will host the NFC Championship Game next Sunday.

• The team widely considered to be the biggest roadblock to a Niners championship, the Ravens, lost their playoff game and are no longer a factor.

• With the Vikings and Ravens both losing, we’re now assured of a purple-free Super Bowl. 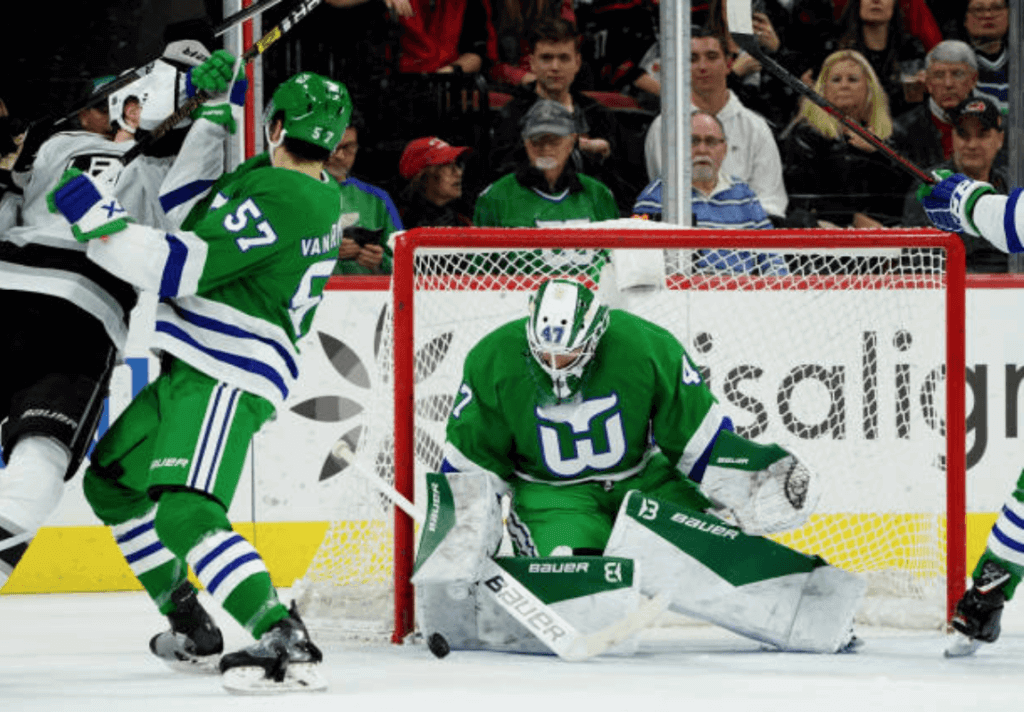 A whale of a game: The Carolina Hurricanes wore their Hartford Whalers throwbacks for last night’s game agains the Kings (additional photos here). I realize this sticks in the craw of some Connecticut fans, and I sympathize with those fans, but I love this move — not just because it’s great to see that Whalers uni again, but also because throwback uniforms are history lessons, and the Hurricanes’ previous franchise incarnation as the Whalers is part of NHL history.

That’s why I also love it when the L.A. Clippers wear Buffalo Braves throwbacks, or when the Oakland A’s wear Philadelphia A’s throwbacks — it teaches fans about the history of the team and the sport.

But hey, that’s just me. If you disagree, feel free to do so in today’s comments.

Sorry, but that’s it for today. Enjoy your Sunday, and I’ll be back with a full slate of content tomorrow. — Paul

It was 70 degrees in Virginia yesterday and I wore shorts too!!

Sticking in the craw of CT fans is one thing, but what about the Carolina hockey fans…

Do Carolina Hurricane fans feel any connection to the Hartford Whalers, or does the franchise’s period in Hartford feel like effectively a different team? Or does a Carolinian suddenly feel pride over CT? (“Ha, ha, we stole your franchise!”) Same for other franchises that have moved.

It might feel nice to have a connection to the history or look nice to the casual fan, but I think the Hurricanes (or Clippers or A’s) should focus on their own fan base. I guess there are a whole bunch of people who love the Whalers’ jersey (not really with Boston Braves or Philly A’s, however), so new fan acquisition is reasonable in the Hurricane’s case.

I’m surprised there was no mention in today’s post about the Hurricanes and NHL just doing this to sell more jerseys. They probably are, but I guess, if it looks good, the financial motives get buried.

I can see why a uniform junkie would get off on it, but for current fans it seems like a way of saying, hey, you got a second-hand team and don’t you forget it. It could be taken away in a heartbeat, pal.

If the Hurricanes had retained the Whalers nickname, I believe the Carolina fans would feel more of a connection to the Hartford team, and would be likelier to feel a (partial) emotional claim on its history. No, this isn’t very logical … but what about fandom ever is?

I just can’t believe in year 2 they haven’t fixed the stripe pattern on the shells.

And 68 degrees in New York City!
I do love the throwbacks but it gets back to the city vs franchise discussion again. Uniforms should. Also be worn where they were loved. Houston Oilers Are essentially meaningless in Nashville but would be loved in Houston. Shame it’s not allowed.

Houston Oilers are a good example where the team name should have been left with the city, like the Browns, and the new expansion team should have resumed this name instead of the Texans. IMHO this isn’t an always thing, where sometimes it makes sense to move with the name, but mostly I like the name staying with the city.

I think Whalers fans and Expos fans feel similarly. Basically, if the old logo is truly the history you want to observe, keep the retired numbers too. But if you’re not observing those retired numbers, then you’re relinquishing that bit of history and you shouldn’t get to wear it anymore, and it feels gross when you do and when you make money from the gift shop on a logo whose history you’re defecating on. I hated seeing Rusty Staub and Andre Dawson’s #10 picked up by Yan Gomes, and as much as I hate agreeing with Bruins announcer Jack Edwards, it must sting seeing Dougie Hamilton wearing inaugural star Jim McKenzie’s #19. Not to mention Jordan Staal wearing Kevin Dineen’s #11 that was retired by Hartford after the Whalers left.

I always liked the Colorado (hockey) Rockies jersey. Wish the Avalanche could bring that back. And by the same token I’d like to see the Wild don a North Stars throwback.

The Colorado Rockies had one of the best unis ever.

Enjoy that Florida winter heat Paul! But it’s 65 and shorts weather in NJ!! Nothing better than shorts in the winter no matter where u are!

I’m a Canes fan, but anything that brings back Brass Bonanza is a definite win

I agree with RICKAZ, keep the team name and history with the city. If the Hurricanes wanted to celebrate the Hartford Whalers, they should play an exhibition in Hartford in their throwbacks and donate a portion of the proceeds to local youth hockey programs. They should be honoring the city and fan base that supported the Whalers for so long.

That thought had occurred to me too, as PL and I share the same favorite team!

On the one hand I appreciate the sentiment from a neutral that when the Hurricanes wear Whalers gear it’s a nice homage to history.

On the other, if you want to enrage me beyond all rational limits then show me the team in OKC wearing Sonics gear for a game.

Did not think it would enrage me until I saw it in real time. Really did not enjoy this as a Vancouver Grizzlies fan:

I don’t think OKC would wear a Supersonics throwback because of the backlash that may cause. I think the next time we will see a Supersonics uniform again would be when then NBA returns to Seattle, which could be possible in the future considering their recent arena renovation.

AFC is the home team in the Super Bowl this year right?

Tennessee has looked pretty good. Not out of the question to see this 9-7 team as AFC Champs. Thinking if Tennessee advances, they probably would wear their white jerseys in the Super Bowl.

I don’t really have any skin in the game as far as cheering for a team (though Seattle Seahawks are kind of our “home” team here in Vancouver, BC), but I think it would be quite awesome to see a Kansas City vs. Green Bay Super Bowl. Like the first one.

And go with the throwback face mask like KC did against Minnesota in the regular season to commemorate Super Bowl IV though curiously, neither GB or KC did so the week before when they faced each other.

I really like when teams wear throwbacks. I do think my favorites, are when a team wears throwbacks of a historical team from the same city. That’s why it’s always cool to see the Negro League matchups.

I wish that the Giants would do a PCL throwback game, so they could don some San Francisco Seals uniforms. The last time they did so was in 1994.

Whattya mean wearing shorts in January is nice? Didn’t you read that article here yesterday about that one kid who wears shorts year round? ;-)

Gross moment of the day: Yesterday anyway…during crowd shots of the Ravens game, I noticed several fans holding the obnoxious D+fence signs. Except that the D was the D logo from Dunkin’ Donuts. Insert eyeroll here.

Best wishes to Phil and his family. Here’s hoping for a swift and favorable resolution to whatever situation they’re dealing with. Looking forward to having you back soon, Phil! Hopefully next weekend!

12 years as UW reader and I had no idea you were a 49ers fan, Paul! I guess I just assumed the Jets were! Cheers!

Paul,
I am with you on the hatred of purple. I had a grade school art teacher who was obsessed with the color so that’s where my dislike of the color began. I refuse to ride Valley Metro because there is purple on the busses-thankful for Uber/Lyft. Even though I have family roots in Minnesota, will not root for the Vikings, and I dislike the Suns because of purple. I have epilepsy and I wished the epilepsy awareness color was not purple. I live in Phoenix and I wear shorts all year round.

Of all the lamest things to be happy about, a color not winning the Super Bowl tops the list. People win Super Bowls, not colors. Some day the Vikes will win it all, they’re the real purple team. The Ravens should stick to all black anyway.

It was also a good day yesterday in the NFL because all the teams playing wore their “Sunday bests” – No one got silly. I was a little worried the Ravens would go mono black – but that didn’t happen.

I think I prefer the Titans in the dark blue pants vs. powder blue pants

I agree. I like the Ravens in purple with white pants and black socks. It’s confusing sometimes hearing Paul complain about all-color uniforms (which I agree with), but hear him make an exception for the Ravens going mono-black based on his dislike of purple.

It was 67 degrees in NY, so we played softball. Then again, we play even if it is 20 degrees, so the only difference was less clothing on.

I really wish the Vikings, Titans and every other team would go back to white striped socks when wearing helmet-matching colored pants. Having the pants and helmet match with a contrasting white jersey is a good look, but the socks and jersey matching is good too. Think about the Redskins, Chiefs, Packers, and Bears road combos. Fantastic look. The Titans haven’t had white socks, but the Vikings did when they briefly wore purple pants in the early 60s, and it certainly looked good compared with the purple leotard look.
link

I can’t understand the hate for purple. Only 2 teams wear it, and they pull it off nicely. Yea it’s not as popular as blue and red, and not every team has to look the same based on popularity of colors. Paul talks about contrast and this idea should apply to team colors.

Vikings should bring back white striped socks with purple pants. Follow the Redskins, Chiefs, and Bears model. It works great with matching helmet and pants with white jersey. Just look for yourself. link

Everyone’a talking about how warm it was where they lived on Sunday and meanwhile, Texas saw snow for a couple of hours and temps in the mid to low 30s.