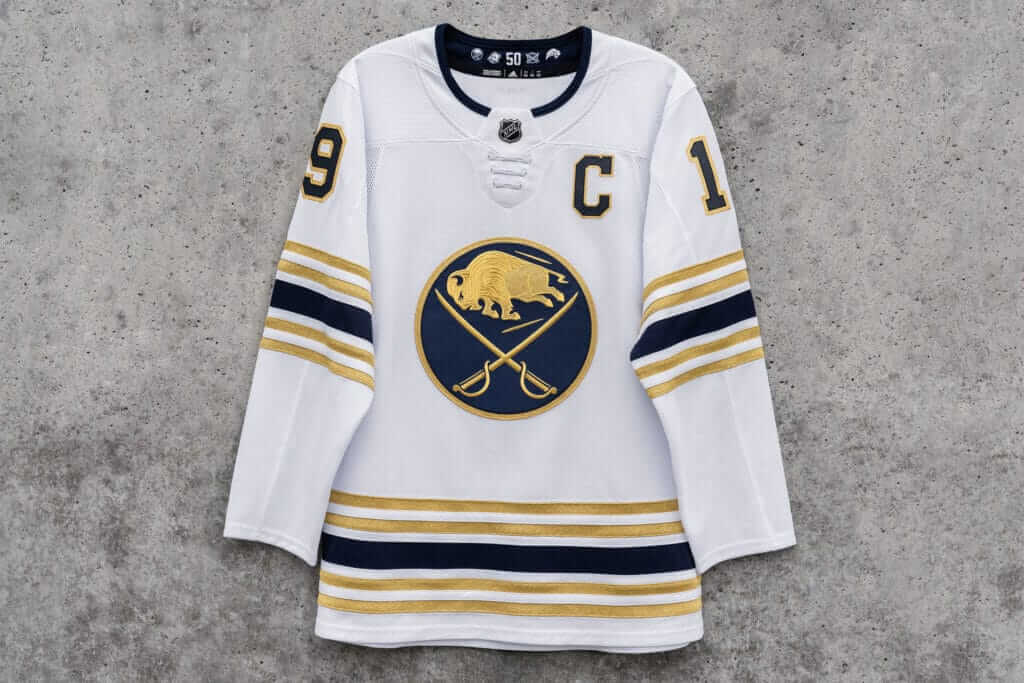 The Buffalo Sabres will be wearing their “Golden Jersey” for select home games next season, celebrating 50 years of professional hockey in Buffalo. The jersey will go on display today for FanFest, and will be available for purchase one month from today on September 17th at The Sabres Store. More info and photos here.

Hometown fans will once again have the chance to see their team take the ice in a white-based jersey, adorned with the iconic Sabres crest in fluorescent gold and navy blue. Five stripes representing each of the franchise’s decades are embroidered on both sleeves as well as the jersey’s bottom.

A tease from the XFL. Let the wild speculation begin.

Our first clues. The big picture is coming soon.#XFL pic.twitter.com/Mi6eTNb0Jr

Here’s a fun story from the folks over at Ebbets Field Flannels.

Great little story from the @twins if you have a minute to read. We recently sent a special delivery to the whole team of our Tabasco Plataneros ballcap so they could surprise their manager Rocco Baldelli. Read Twins pitcher,
Kyle Gibson’s note below: “Yeah it was really funny! So our manager Rocco Baldelli had been wearing this same hat every road trip, every day, everywhere he went…..and we couldn’t figure out what it was. Well one day Jason Castro was looking online for a hat, and he ran across the Tabasco hat! And the debate started about if Rocco had the fitted or the adjustable (just stupid debates between grown men!) haha and then it turned into, “ok he wears this thing everywhere….what if we get them for the whole team and we show up one trip without him knowing and we are ALL wearing the hat!!!” So this past trip we were going from Milwaukee to Texas, and on the bus ride to the airport we passed them out so that as we got off the bus he was blindsided by 50 other guys and gals wearing the same hat! This is his first year as a manager and this is the first time we have done anything to “prank him” and he thoroughly enjoyed it!!!! Thanks for making this happen!” Thanks #mntwins for including us in this great prank. Look forward to more pics to come! Glad we could be a part of it.
If you’re looking for the hat, we have more stock coming in mid Sept. Sign up for an alert under the size choices and you’ll be emailed as soon as they’re back!

According to the NBA Store, D'Angelo Russell (@Dloading) will wear No. 0 for the #Warriors. #NBA @UniWatch pic.twitter.com/JZficgI8dG

Here are the new kits for Utah State.

One week from tomorrow (Saturday, August 24) we take the ice errrr field as the Jacksonville Frozen Shrimp as a nod to our neighbors & buds the @JaxIcemen

Jerseys will be auctioned off during the game. Hats will be for sale in our souvenir store. #OldTimeHockey #LaceEmUp pic.twitter.com/KF0Eo4qWoh

From Paul, here is some news out of Baylor.

Baylor: niiiiice. No BFBS, no GFGS, no chrome, just school colors and legible fonts. I knew you could do it, Nike…

Black and gray do remain in their athletics brand book, so you might see them once again.

Yeah, Baylor (and West Virginia and Sparty) all announced those a while back — pretty sure Paul is just posting that for his NCAAFB preview on SI. If you scroll down, you can read much more about those three link (after the Kreindler piece).

Also, same thing with the Beavs. Those were link.

Only issue is that they should pair the green jersey with the yellow pants, and if you must have a yellow jersey, perhaps wear the green pants with it. You would think that if they have six players modeling the uniforms, they’d give us six different color combos. Also, it would be helpful if they showed the helmets so we could get a full idea of the look.

Agreed.
Even more so, for years, decades, the Baylor Home Football uniform was Green jersey, White pants, Gold helmet – a very clean, nice, identifiable and unique look.
Certainly they could work that back into the mix.

That Sabres jersey is sharp, and it could’ve gone really wrong. Nicely done.

Except for the shade of blue. They should have gone with royal.

Fine with the navy for this jersey because we are going to be getting the Sabres back in royal blue in 2020-21 (finally – it took a while).

This looks good. I like the fur detail on the logo. When we are talking about the Sabres, there always was a chance the uniform could have gone wrong. After all, this team has a history of unveiling looks that have been given less than flattering nicknames. They are responsible for giving us the turd burger uniform and the buffaslug.

Minor quibble with the “50 years of professional hockey in Buffalo”…while certainly Sabres joined the NHL in 1970-71, high level pro hockey was in Buffalo for decades before. Here is info on the AHL team the Sabres displaced, plus there were teams prior. link

Luv the Oregon State horizontal shoulder striping in their jerseys. THAT is the future of football jersey detailing, given the elimination/truncation of sleeves on football jerseys. The Shoulders and Yoke of the jersey are where the detailing is headed, assuming these designers use their heads.