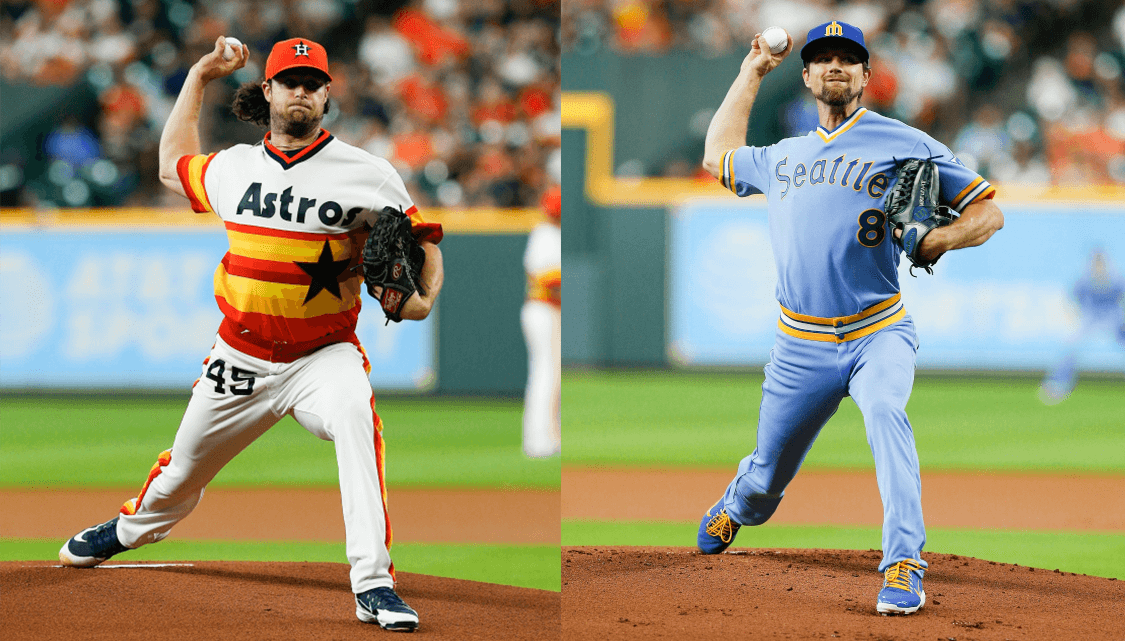 The Houston Astros and Seattle Mariners turned the clock back last night, with the ‘Stros wearing the famous “Tequila Sunrise” unis and the Mariners donning their 1979 powder blue road uniforms.

The Mariners’ Twitter account was really getting into the 70’s groove all night, posting throwback images and graphics, old-school logos and all.

Sweetness. It's time for Sugar. Mariners up 5-2 as we head to the bottom of the 9th. pic.twitter.com/123Vz6J3fd

The Astros were having fun as well, posting 70s-era videoboard-inspired graphics throughout the night.

Here’s a shot of the unis in action:

Needed all the extension to make that catch. 😱 pic.twitter.com/ecLyeScb8M

Some more shots of the unis below. 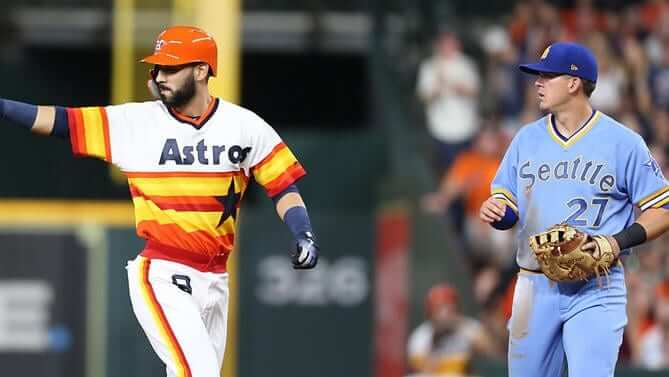 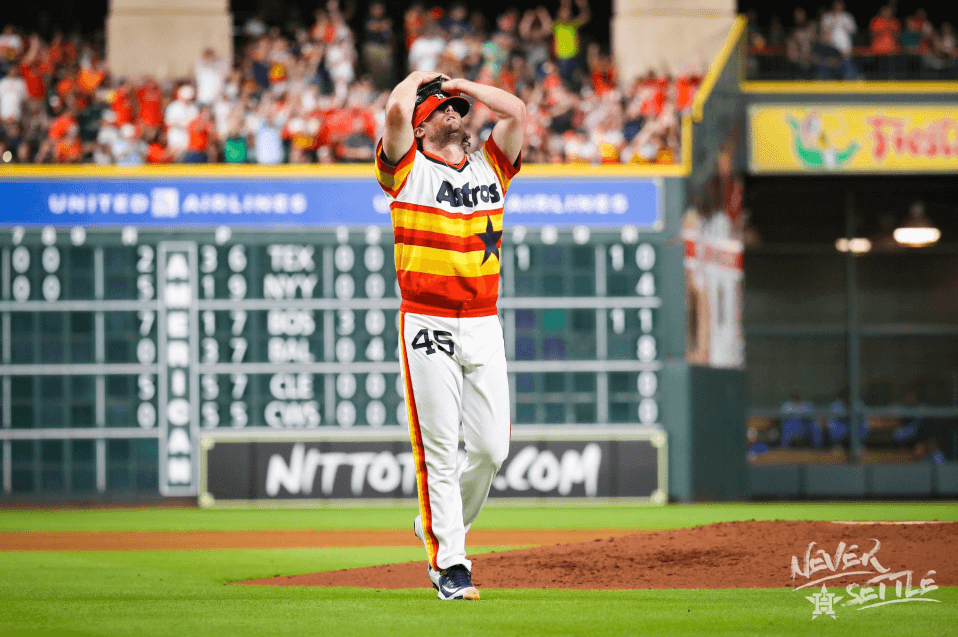 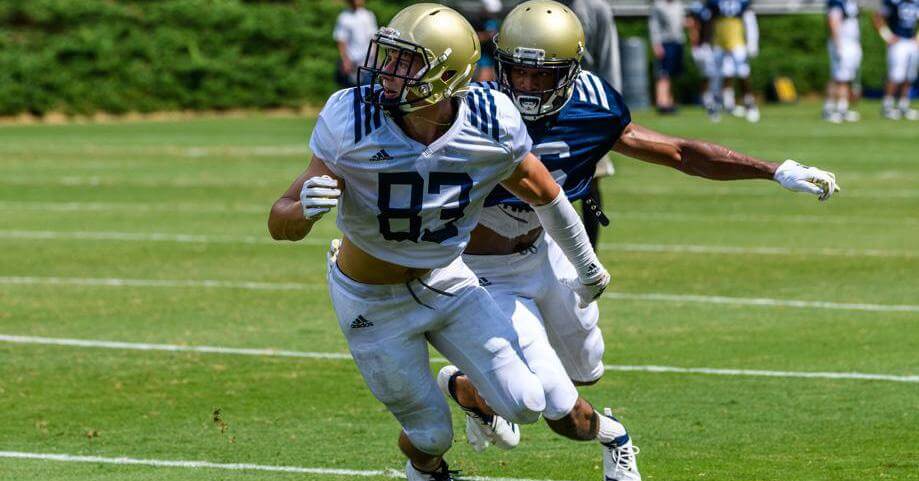 Georgia Tech, as you know, switched from Russell Athletic to Adidas this year. All the players were, of course, excited to be wearing new unis this season, but now they’re all singing the praises of the new practice gear.

Still, as a benefit, it’s a little nebulous. However, a week of preseason practice has revealed a more tangible advantage of playing and practicing in Adidas gear. The practice jerseys and pants are an improvement not just in style, but in quality.

Practice gear that wicks sweat more effectively is no small matter as the Jackets labor in 90-degree heat during August. Better fit is a help, too.

Players have praised the uniforms for giving them greater mobility, along with keeping them cooler. That has to help in that Georgia summer heat.

Earlier this year Aaron Judge signed a three-year endorsement deal with Oakley. Now the promotional material is starting to roll out.

.@oakley is introducing @TheJudge44 as one of its official athletes today. #TeamOakley #SportsBiz #Yankees 🕶⚽️ pic.twitter.com/3ZLUU8wsPD

Last month, he also inked a deal with JBL.

It’s official—@TheJudge44 has joined the JBL lineup. He brings the noise, we bring the sound. pic.twitter.com/rxIMT14gR7

The Cleveland Browns’ current uniform design isn’t going anywhere — at least not for another two years — but the team will manage to make a brief departure from its not-so-popular look in 2018.

Last nights Astros game with throwbacks was a sight to see! Couldn’t get enough of it and glad I didn’t miss it!

Was great with both teams wearing the throwbacks.

Only 1 thing I was disappointed about. The Mariners wore their navy batting helmets. They have royal blue ones for their Sunday home games. Would have been better if they brought their royal blue batting helmets and used the proper throwback logo on the helmets.

The coaches were wearing the royal tops they wear when they wear the Sunday cream. Should have shipped out the helmets as well.

Only problem with the Astros Mariners throwback game is the pajama pants.

The Browns’ color rush are briskly their current white unis without the pant wordmark. So this is actually a good thing.

Geoff Blum is an Astros legend in the sense that his extra innings home run in game 3 of the 2005 World Series doomed the Astros to be swept.

There’s no point in throwbacks if the batting helmets don’t match. The ‘Stros nailed it with their orange helmets!

The Asstros have those orange helmets as part of their normal kit.

Besides the lack of contrast, those Browns color rash unis are far superior to their usual options.

I liked that a lot of the Astros went with stirrups last night. Aside from the pajama pants, a minor quibble I had is that I’m pretty sure for that particular uni, the Mariners wore a henley, not a v-neck. Either way, loved the colors, loved that the Astros broadcast went retro with graphics too.

The Mariners indeed wore a v-neck pullover in ’79. Willie Horton was the only player who had his road jersey modified to a henley style.

A technical question: When retro unis are recreated do they use actual specs or do they reproduce them from photographs?

It looks like the Astros finally got the rear numbers placed correctly on the sunrise throwbacks. They’ve been placing the numbers too high – or the stripes too low – on the backs. The stripes should come up to the top of the numbers, as was done with last night’s jerseys. Good work.

The stripes are the problem; they are positioned too low even now. Back in the day the stripes came all the way up to the players’ armpits, so the numbers could fit into them. Now the stripes (like seemingly all uniform elements) are moving down lower and taking everything with them.

As an alum, shame on Georgia Tech for wearing inferior uniforms all these years. Just think how much better they’d be wearing Nike. As a long-suffering critic of the Jackets and their unis, there’s my take on the adidas makeover: link