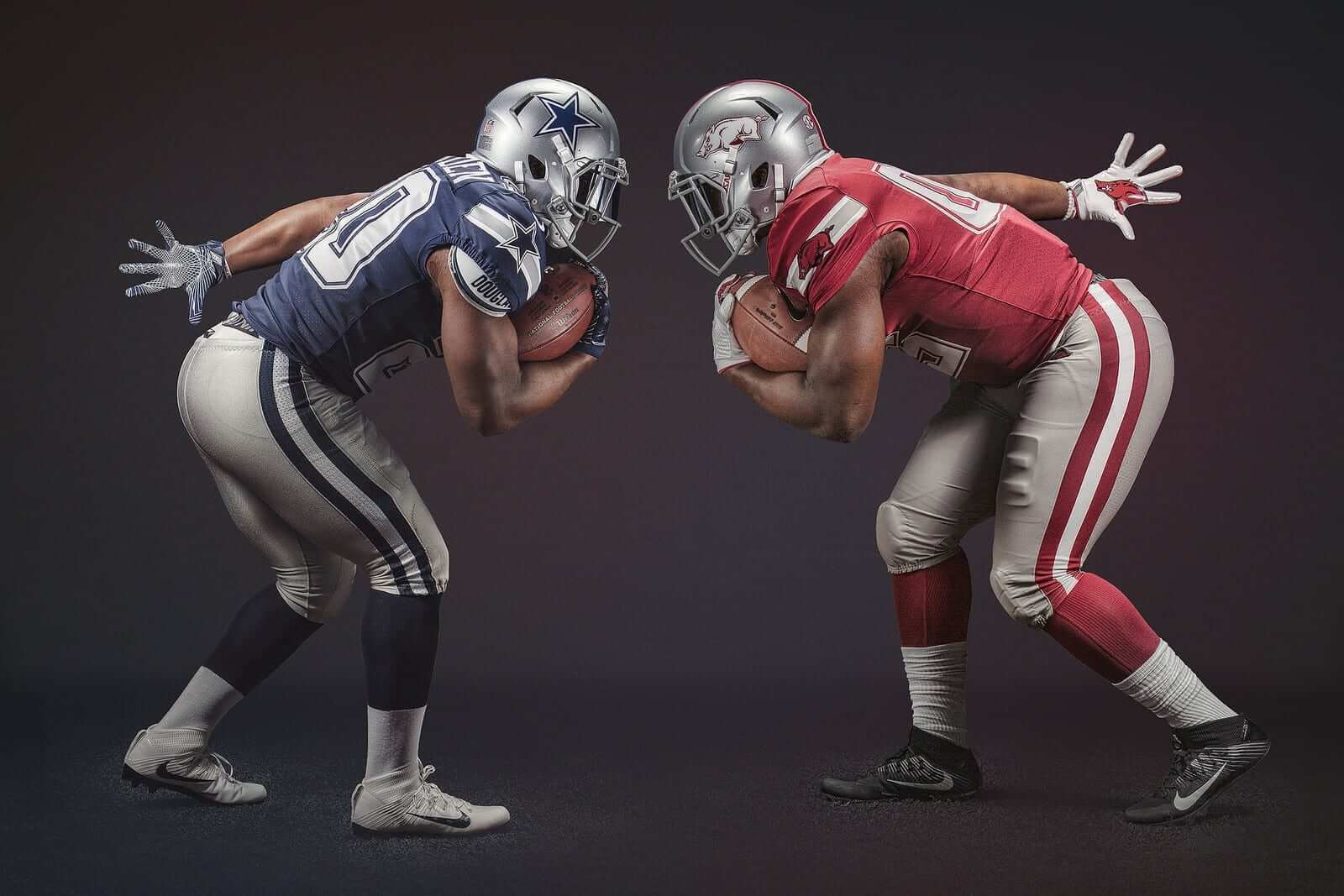 As I mentioned earlier this week, Arkansas will be honoring their most famous alum, Jerry Jones, by wearing Cowboys-style uniforms when they play Texas A&M at the Cowboys’ stadium this Saturday.

On Tuesday I got to interview Arkansas equipment manager Jake Rosch, who filled me in on a lot of details regarding this uniform project. It was a tremendously enjoyable interview, and I think you’ll enjoy it as well. Check it out here on ESPN.com.

I really ought to interview equipment managers more often. They geek out about this stuff just like we do.

NFL News: Following up on yesterday’s entry about nose rings: Chiefs WR Tyreek Hill has a nose stud (from Coleman Brockmeier). … And from yesterday’s comments, here’s former Dolphins RB Ricky Williams with a nose stud (from John Cropp). … Looks like Cardinals RB David Johnson has his own personal logo (from Matthew Crooks). … A group of current and former NFL players have asked commish Roger Goodell to designate November as a month for activism awareness, similar to the current campaigns for cancer and the military. It’s not clear to what extent, if any, this would involve uniforms or accessories. Goodell’s response is also unknown, at least for now.

College Football News: Indiana will wear their “Hep’s Rock” alternates this weekend (from Darrell Frazier). … Alternate cream unis this weekend for Oklahoma (from Sam McKinley). … 1997 throwbacks this week for Southern Miss. … Want to vote on the best San Diego State helmet of all time? Sure you do. … Military appreciation uniforms this weekend for Virginia Tech (from Andrew Cosentino).

Hockey News: Bauer, the hockey equipment brand, has come up with a new collar device that supposedly prevents brain damage. This appears to be similar to the device worn by Carolina Panthers LB Luke Kuechly (from Ted Arnold).

NBA News: The 76ers have announced a “Spirit of 76” campaign, which will feature a retro-style court and a new alternate uniform, with the uni to be unveiled later this fall. The promotion will also include three new statues of yet-to-be-named Sixers greats (thanks, Phil).

College Hoops News: Florida State’s uniforms are staying the same for this season (from Ryan Kelly). … New court design for Creighton (from @CourtlandOlson).

Soccer News: Sporting KC wore their primary kits in the US Open Cup final last night (from @powerandfinesse). … The Portland Timbers have signed a five-year-old keeper (yes, really), and he’ll wear No. 100 (from Mike Donovan).

Grab Bag: There’s a new-ish book about the symbolism of national flags. … The great minutiae website Atlas Obscura has been doing an entire week of articles about pants. … Here’s one observer’s picks for the eight most iconic retro jerseys in rap videos (from Mike Chamernik). … With Toys R Us filing for bankruptcy, Robert Hayes found a graphic showing the evolution of the company’s giraffe mascot. … This is interesting: an artist who produces handmade quilts from prison uniforms (from Marc Rivlin). … The University of West Georgia has inked a new apparel deal with Adidas (from Bo Childers).

Indiana football alt story is a link to unknown tweet

Silver razorback on silver helmet? Why didn’t they go with the red logo there? Otherwise a great set. And just another reminder how much of a shame it is that Dallas doesn’t wear their navy set on the road (or properly match up the silvers and blues on their white set).

Certainly lighter than the helmet, lighter silver/gray or white. Either way though, if they are trying to mimic the Dallas helmet wouldn’t the red razorback mirror the navy star? Maybe Paul could follow up with their equipment guy about that.

I used to be a staunch advocate of Dallas “fixing” their white uniforms but I just wish now that they would wear the blues half the season and maybe the color rush with navy socks a few times. I love that all of their sets are unique and none use the same pants, jersey, or socks. I just want to see the blues more, they are the best uniform in pro sports.

Couldnt agree more. If youre going to copy the scheme, COPY THE DAMNED SCHEME! Cool look though. On a similar note, the U has a new sleeve look similar to the Dolphins throwbacks. That would be a sweet uni for them to copy for a game in honor of recent events

Definitely a good read for the lede today! It nicely answered my own questions about this particular promotion, namely why they based the uniforms on the Cowboys’ blue jerseys. I figured trying to match the white unis with all their idiosyncrasies would be problematic at best, but it’s good to know their reasoning behind the decision.

While I think this tribute uni is actually better than what the Hogs currently wear, is this the next new ‘trend’ in NCAAFB? Last year Miss State did a “tribute” to the Patriots (and of course we know K-State [also Cowboys] and Iowa [Stillers] already mimic NFL teams).

Re Razorback unis (or any for that matter)….

Why wear tall white socks then push/crumple them down??

Not sure if this is one of those Rorshach tests but when I look at the quilt I feel like I am seeing some kind of jailhouse confession in that quilt.

Based on the article I think it is supposed to read “WE THE PEOPLE”.

I believe you are correct, Edith. Whew! Glad to clear that up.

I’ll leave it, just to show the good interaction between commenters.

Heck, if you like the quilt you will love the PowerPick!That blanket is not near as powerful as this statue HWT created near the legendary Rizzo statue in Philly. Read more here

Shorpy has a nice picture of the World’s Champion Indoor Base Ball team. Big ball.

Not directly uni-related but, Paul, with the news of Robert Grays dying after a tackle last weekend and the ongoing results about CTE in youth players all the way through the NFL, are you having any second thoughts about supporting football?

If by “supporting” you mean “writing about,” it’s something I think about literally every single day.

Interesting to hear. Any thoughts about pulling an Ed Cunningham, doing something like ‘Skins Watch, or taking any other steps? Respectfully, you’re part of the machine, now.

Not there yet. But as I just said, it’s something I think about literally every day.

One thing I’ve decided: No more coverage of Pop Warner or other pre-high school football (not that we have very much coverage of that to begin with, but still).

One thing I’ve decided: No more coverage of Pop Warner or other pre-high school football (not that we have very much coverage of that to begin with, but still).

Kudos on this. Not that there’s likely much uni-relevant stuff to cover, but to the extent that there is or might be, what about featuring probably-not-brain-damage-causing alternatives like youth flag football? Anecdotally, I’m aware of some parents of young children who aren’t willing to let their children play contact football but who have gotten involved in starting flag-football leagues. Probably a moot point owing to lack of uni-relevance, but it may be a good thing that would benefit from whatever exposure could be had.

Yes this was a great article and yes you should absolutely interview equipment managers. Especially NCAA football…they have a lot of stuff and clearly can be more creative because they don’t have NFL rules. And so refreshing to see a well thought out uniform that isn’t “head to toe anthracite because Nike says it’s awesome.”

I completely agree with the rationale: one look and I thought “hey look, Arkansas wants to be the scarlet Cowboys,” and then I read that it’s a tip of the cap to alumnus Jerry for the game at landlord Jerry’s place and it all made sense. Looks great. And I despise the Cowboys green silver pants. Arkansas matches, they look awesome, and they look like a Cowboys ripoff that they are deliberately going for for a great reason. And I didn’t even get to the best part: not just the red dymo tape, but the man’s remembering the orientation (last name starts at the base and goes up) and his OCD to keeping the helmets to himself and just one trusted top assistant.

I know you didn’t mean any malice, but maintaining control of a task you feel you’re good at is *not* OCD.

“Florida State’s uniforms are staying the same for this season (from Ryan Kelly). … ”

In college hoops, staying the same actually *is* news. More the exception than the rule.

Man, that’s a great looking “Spirit of 76” court there.

Hopefully they’ll do a special “Bennington Flag” giveaway during a game this year.

That is a great looking court.

The link is almost certainly a fauxback, in that there’s no evidence that it existed at any point during the War of Independence, but rather reflects what people in either 1826 or 1876 thought a flag from 1777 would have looked like. And like the Rays fauxbacks, in a way it’s actually kind of better than the real thing.

I was juggling how to make it sound the worst; pictured a rancher branding his cattle.

One of the worst of the bunch. I figured they’d all be relatively nationally known brands that could just plop their logo on there (Goodyear, GE, etc). Never heard of this company.
Almost looks like what a company that pays to “sponsor” a charity 5k puts on the back of the shirt the participants get. Pathetic for a major league team.

It looks awful in every way. Always figured they’d add something, there’d been some lobbying for Micky Arison to use the space to promote YoungArts. Alas, the new year isn’t one of tzedakah.

You’ve outdone yourself with the Grab Bag today. I’m going to order the flag book, along with a book about maps by the same author, and I’m pretty sure that my work productivity will take a major hit this morning while I read all about pants.

Thanks for the links!

Regarding the Portland Timbers signing a 5-year-old goalkeeper: Congrats to Derrick Tellez on his signing. I wasn’t sure he’d get picked up after his disastrous performance for Manchester City when he was 3…best of luck!

A happy, healthy new year to those who are celebrating Rosh Hashanah.

I get what IU is going for, but those “Hep’s Rock” pants and uniform numbers just look dirty. Noble idea, poorly executed.

Is there a clean way to execute that? Love it or hate it, I don’t think there’s any way to do it differently. It’s a rock pattern. Rock. Inherently dirty.

What a way to feed into Jerry’s already astronomical ego… God help us all!

Concerning Portland Timbers marking a 5-year-old goalkeeper: Congrats to Derrick Tellez on his marking. I didn’t know he’d get gotten after his shocking execution for Manchester City when he was 3… good luck! link