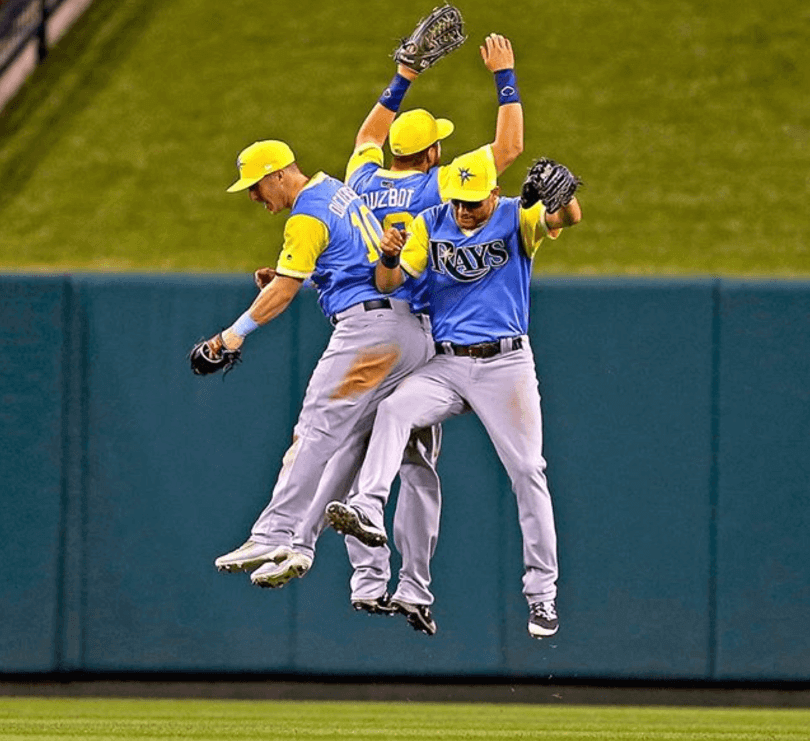 As I’m sure everyone was well aware by now, last night began Major League Baseball’s “Players Weekend” event. Billed as being “for the players”, not all of them were in love with it. Brett Gardner of the New York Yankees was one of those players:

“I’m more of an old-school guy, so I’m not a big fan of it,” Gardner told ESPN’s Andrew Marchand. “It doesn’t really matter what I think. I’ll play and hopefully we’ll win.”

Gardner is the only Yankees player who will have his last name on the back of his jersey, as opposed to a nickname, during the team’s series against Seattle. But had it been completely up to him, Gardner would have neither.

“I tried to go no name at all and keep it original. But they made me put something,” Gardner said. “I figured I never had my name on the back of my jersey before, so instead of putting a freakin’ nickname, I put my name on there. [Having no name] apparently is not allowed.”

Despite objecting to the nicknames, he did wear a high-visibility stars and stripes undershirt last night. 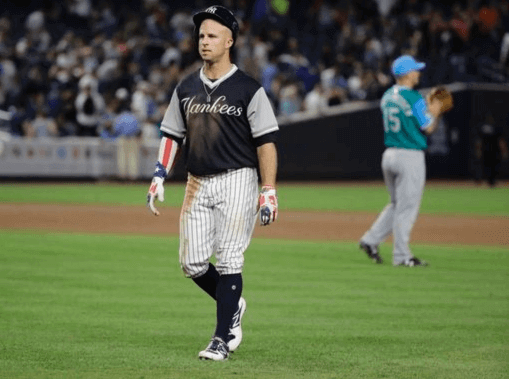 Both Yankees manager Joe Girardi and former Yankees player Don Mattingly didn’t seem pleased with having to participate in Players Weekend. Mattingly, in particular, appears to be tiring of the many events and promotions in Major League Baseball today. Maybe it’s a Yankees thing.

“My thought is, it’s a three-day thing so it doesn’t really change the tradition of the Yankees. It doesn’t really change what the pinstripes stand for,” manager Joe Girardi said. “I’m sure we’re going to see some wild things out there. Probably something I never imagined that I would see on a field. But after these three days, I won’t have to look at it again for a year.”

Mattingly said Players Weekend is cool and fun, but also sounded like a traditionalist regarding such events.

“There are so many. It used to be Mother’s Day, Father’s Day and the Fourth of July. Now it’s weekends and three or four days of it. Some of that seems a little over the top,” he said.

The nicknames were blanketed all over the field, but they also took over MLB.com and even made it through to my MLB app alerts.

The event did produce some interesting matchups, like Sherriff vs. Outlaw. 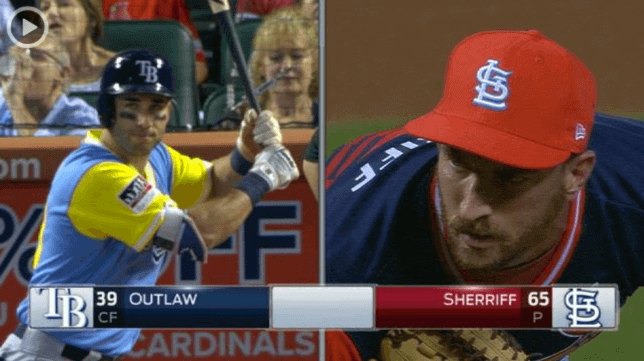 The Cardinals only called up Ryan Sherriff a few days ago, so there wasn’t enough time to select a nickname for this weekend’s games. Sherriff got “Outlaw” (the Rays’ Kevin Kiermaier) to ground into a fielder’s choice.

Via Dave Feigenbaum, The Indians’ Joe Smith was spotted wearing the wrong home pants last night. Smith wore the standard striped version, while the rest of the team was in plain white. 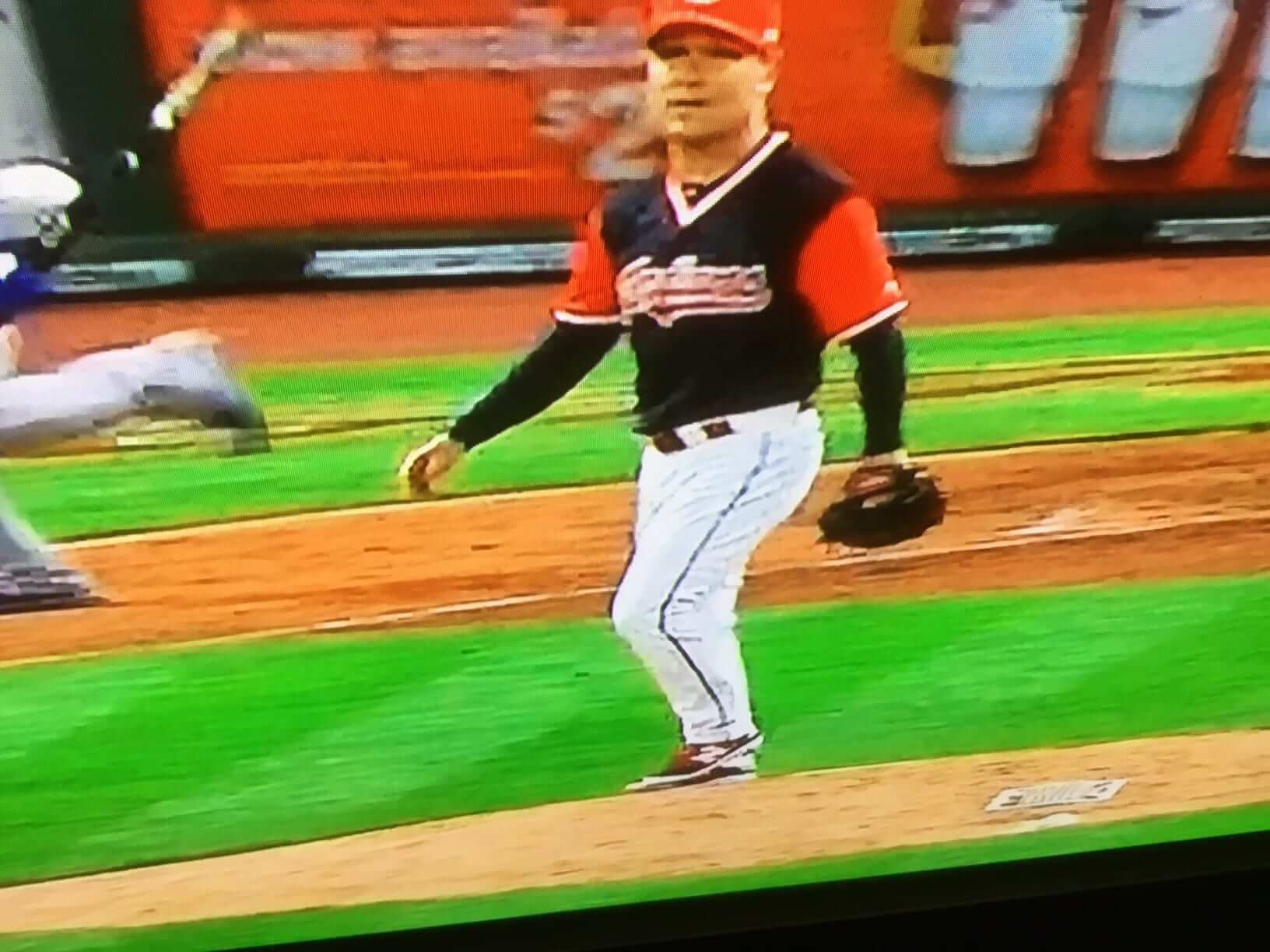 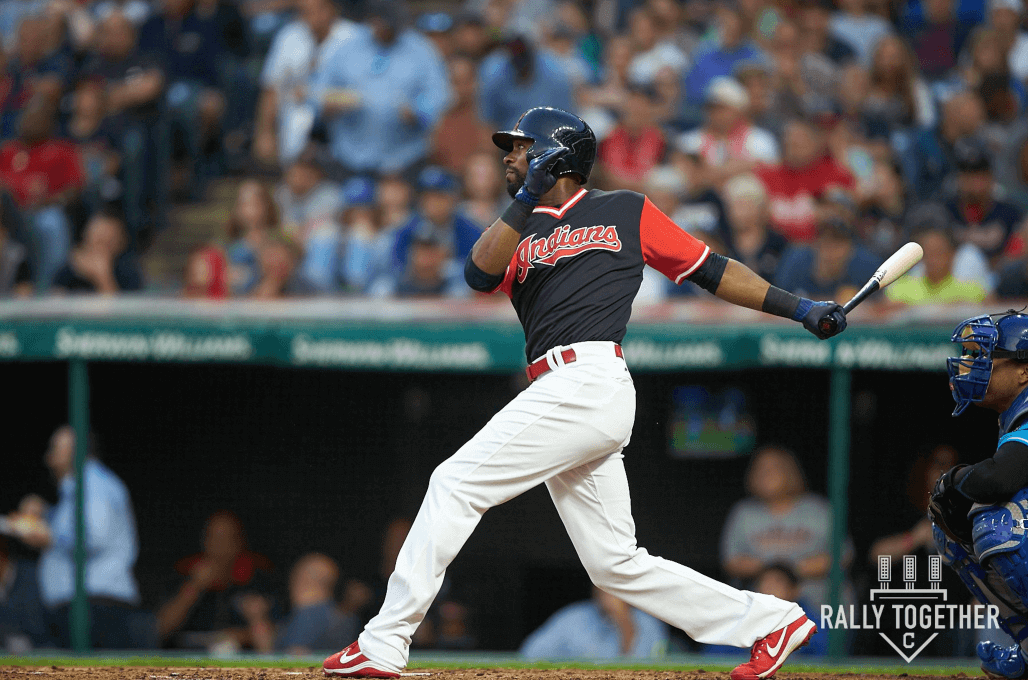 From the Korea Herald:

Two of the MLB’s South Korean contingent chose to have their names on their jerseys as normal, but with a twist. Those two players, St. Louis Cardinals reliever Oh Seung-hwan and Philadelphia Phillies outfielder Kim Hyun-soo, elected to have their names written on the back of their jersey in their native Korean in lieu of a nickname.

Hyun Soo Kim has his NOB in Korean for #PlayersWeekend appears to be sown on separate plate not directly onto jersey. @PhilHecken @UniWatch pic.twitter.com/omDqPxmVQC

. @UniWatch Sueng Hwan Oh got a special nameplate for the Korean characters on his players weekend jersey pic.twitter.com/5SthWwwCWN

The players appeared to be enjoying themselves, but my God was it an eyesore. 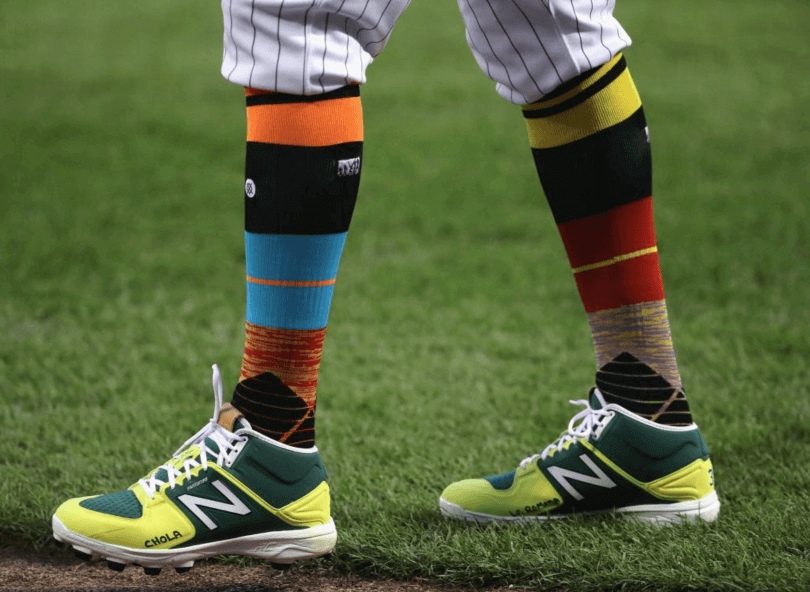 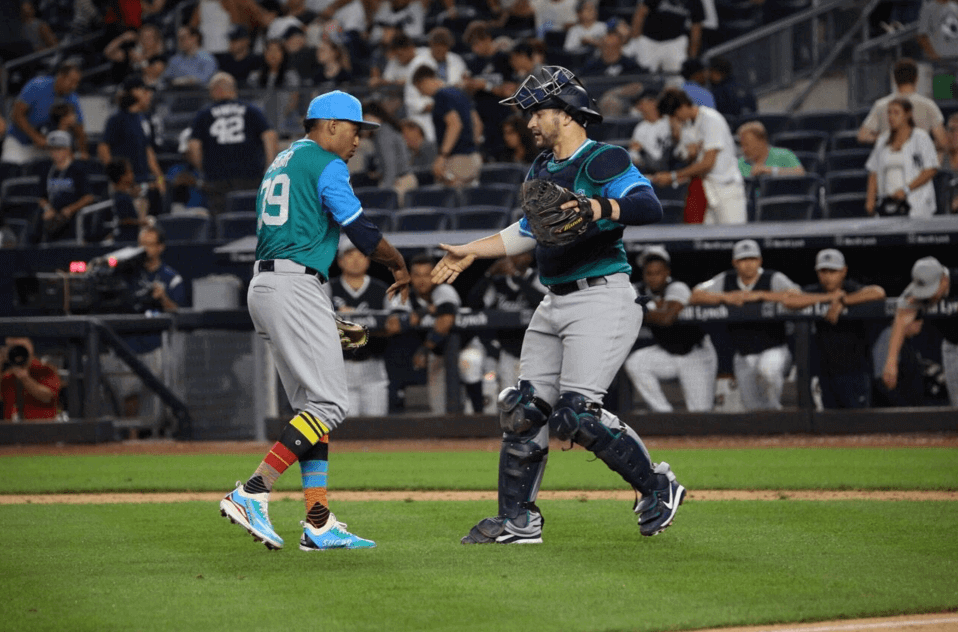 + + + + + + + + + + + + + +
The Los Angeles Angels are doing a cross-team, cross-sport promotional event in September. I believe this event ran last year as well, and was in support of the Anaheim Ducks Foundation.

Fans can purchase this jersey and cap and more #DucksNight merch at the Angels Team Store on 9/19!#DucksNight tix: https://t.co/5dp2WrfUbp pic.twitter.com/4IsLIJu2fa

There’s a lot of irony in the Players Week uniforms. I feel like the vibe and message is that they are trying to be anti-establishment and wearing things that normally aren’t allowed. But the funny thing is it’s being forced upon by the establishment, the MLB, and hence is not genuine or authentic and we are it’s just a colorful yet clunky few days of baseball. Perhaps it’s growing pains as the MLB is trying to connect to a younger generation but it’s a very forced and heavy marketing move and not a smooth, natural direction.

I think it’s intended to be mirthful, not ‘anti-establishment.’ Or if that is anti-establishment — nicknames! zany socks!! — it’s pretty tepid. And as you note, more than anything it’s just more anodyne corporate conformity masquerading as something fresh and spontaneous.

I only know one thing that I’m certain of today:Players Week is a visual mess.

The one thing I’m relieved about, is that the color of the caps does seem to match the color of the sleeves. In the promotional photos, they often didn’t match. The light blues especially clashed with each other, but the game photos of my Cubs look like they actually are the same shade.

The Yankees could have worn the “Y” pinstripe uniforms worn in the original Bad News Bears movie. Would it have fit the spirit of the weekend, kept tradition, and they would have been the best tribute to youth.

I am interested in what clubs would have come up with if they were not forced to use the template. That goes for the other special uni weekends.

Didn’t watch any baseball last night and won’t until Monday.

I got the MLB radio app. Worth every penny and a great way to enjoy these games without feeling nautious, or betrayed or annoyed.

Worst spelling of nauseous i have ever seen. Hell, it made me nautious!

It made you nauseated; being nauseated means that something is making your stomach queasy, and could make you vomit.

Being nauseous, on the other hand, means that YOU make other people have to throw up.

I’m starting to get autoplaying video ads again. Cant even find the video on the page. Its this website. I simply mute the tab, but still annoying.

Happened to me once yesterday. Chrome on a PC running Windows 8.

Happened to me just now when I logged on.

This happened to me just now when I came on to the site.

The ONLY thing I like about this who weekend is the Korean players names. I think it should be a standing rule that any Asian player can have their name in their native alphabet throughout the MLB.

A few years back I went to a twins game that used the Korean alphabet name on the big screen for their Korean player.

Every time I see Brett Gardner on the field he looks angry. I’ve never read an interview with him before, but it reads just like I’d imagine.
The dude makes millions of dollars to play baseball…maybe he should lighten up a little.

The vast majority of the players love the promotion as a whole. There are definitely some over the top parts that just clash (Stance socks in particular). But being able to customize their gear even more so than normal was a lot of fun for most involved.

I do think they should have let Gardy go nameless if he wanted.

I sort of like the socks. Bought one of the hats (I’m a hat guy).

Nice picture of Joe Smith in striped pants. Looks an awful lot like the one I sent Phil. Thanks for the attribution.

Yeah, I forwarded your e-mail to John b/c I figured he’d be covering the clown suits today. Maybe he got confused. I certainly don’t want the credit.

Thanks. They are clown suits.

Did the striped pants cause his head to be incredibly large :-P

This was my fault. Apologies.

For Players’ Weekend they let Smith use the NBA Jam big-head cheat code.

The Giants uniforms were like being stabbed in the eyes with an orange highlighter.

And the Orioles and the Tigers!

Bummer all three were the same.

Words can’t express how bad the Yankees look in that costume.

They might as well wear road pants with these optical migraines.

Actually the pinstripe pants were the only redeeming quality.

And Brett Gardner should’ve requested “No Name” for his NOB.

Has anyone else noticed that the MLB batterman in the evolution logo is wearing pajama pants?

then what’s with severely clashing red white an blue gloves and the sleeve or undershirt ???

I think it’s wrong to be too hard on Brett. Even though there’s a “Yankee Way of Doing Things”, he was laid-back enough to sport a set of white cleats that were gifted to him by CC Sabathia a year or two ago.

“Some of that seems over the top” – Don Mattingly

That’s the understatement of the year.

Socks could have at minimum matched the uniforms. On the whole, it’s an eyesore. Most regular little league teams look better.

I would have liked to see matching helmets. If you are wearing the uniform three days invest in helmets.

As a Yankee fan, one source of pride was always the uniform tradition – home pinstripes, road grays, one cap worn with both, no NOB, no uni maker’s logo. When you mess with that you lose some of what makes the team unique. This year they retired Jeter’s #2 while wearing pink-accented jerseys. Some tradition.

I understand that this is not very important in the general scheme of things, but it would be nice if MLB didn’t screw around with iconic uniforms for the sake of profit (available for $199.99 at shop.mlb.com!). Can’t wait for the big honking “UA” on the front of next year’s unis!

My 14 year old son was watching the Mets/Nationals game and summed it up perfectly. .. “yuck!!”

I’m Surprised the liberal left didn’t have a problem with Ellsbury’ s “Chief” nickname. Where they too busy chasing other “offensive” things.

Ellsbury is Native American, he can call himself “Chief” if he wishes.

But is he actually a chief of a tribe?

As a resident, the head of our Department of Medicine went informally by “Chief”, as he was Chief of Medicine. He was Italian.

“Chief” as a word comes from Old French with Latin roots. Think harder.

Yes, the word “chief” is used in other contexts than native Americans. Even in baseball itself, one member of each umpiring crew is referred to as the crew chief.

Some better than others. My favorite aspects:

Nicknames
Patch honoring someone
The socks!
The Marlins! That’s how you do it

Then again I also love the “turn ahead the clock” uniforms from the 90s.

The worst were the ones that felt like they went halfway like the Yankees. If they had to stay with a drab color palette, why not jazz up the design? Like hand drawn or abstract pinstripes. Give it an urban flair.

The socks were far and away the worst part of the weekend. I’d like to know what the hell kind of thinking went into those – “Let’s design socks that clash with eachother and won’t match any of the teams!!”

Too bad Gardner wasnt clever enough to tell them his nickname was “pinstripes”!

MLB should have allowed Gardner to go NNOB, bad move by them. If I were him, I would have gone with Kay’s uniform description of “No Name…of Course”.

I like the player’s weekend uniforms. It’s fun and something different.

Interestingly, the Trail Blazer video was recorded next door to the Moda Center in the old Memorial Coliseum. It is a dump that should have been bulldozed two decades ago.