Today we are joined by Matt Powers, who has, since 2009, brought us the annual NBA All Star Game sneaker preview. He’s back again this year. Enjoy! — PH

With the 2016 All Star game upon us, here are the shoes that the players will be projected to be wearing in Toronto (you can click on most of these photos to enlarge):

Although, back in January, in a game against the Bucks, Butler raised some eyebrows wearing a non-Bulls colorway of the Air Jordan XXIX paying homage to his alma mater, Marquette:

Thanks, Matt. On a personal note, Matt’s been a good friend of mine for a number of years, and I know that this year’s annual sneaker review was constructed under very personal trying circumstances.

Matt — Thank you very much for continuing our annual tradition. I wish you all the best and offer you my support should you ever want and need it. Hang in there buddy! Gimme a shout any time.

[Thanks to Brinke for the images]

In case you missed it, Paul’s Friday Flashback on ESPN gave us a very in-depth look at the history of the NBA’s All-Star game unis, which for many years didn’t actually suck (although I happen to think this year’s unis aren’t terrible…Kia ad patch aside). Particularly awesome were the many years when the East and West would wear jerseys resembling those of the host team’s uni (the mostest awesome of which was undoubtedly the Warriors’-based 1967 All Star game unis).

Great read, so be sure to check it out if you missed it!

T-Shirt Club reminder: Paul here. In case you missed it earlier this week, the first Uni Watch T-Shirt Club design of 2016 is now available for ordering. Here’s the design, including a close-up of the jock tag graphic (for all of these, you can click to enlarge): 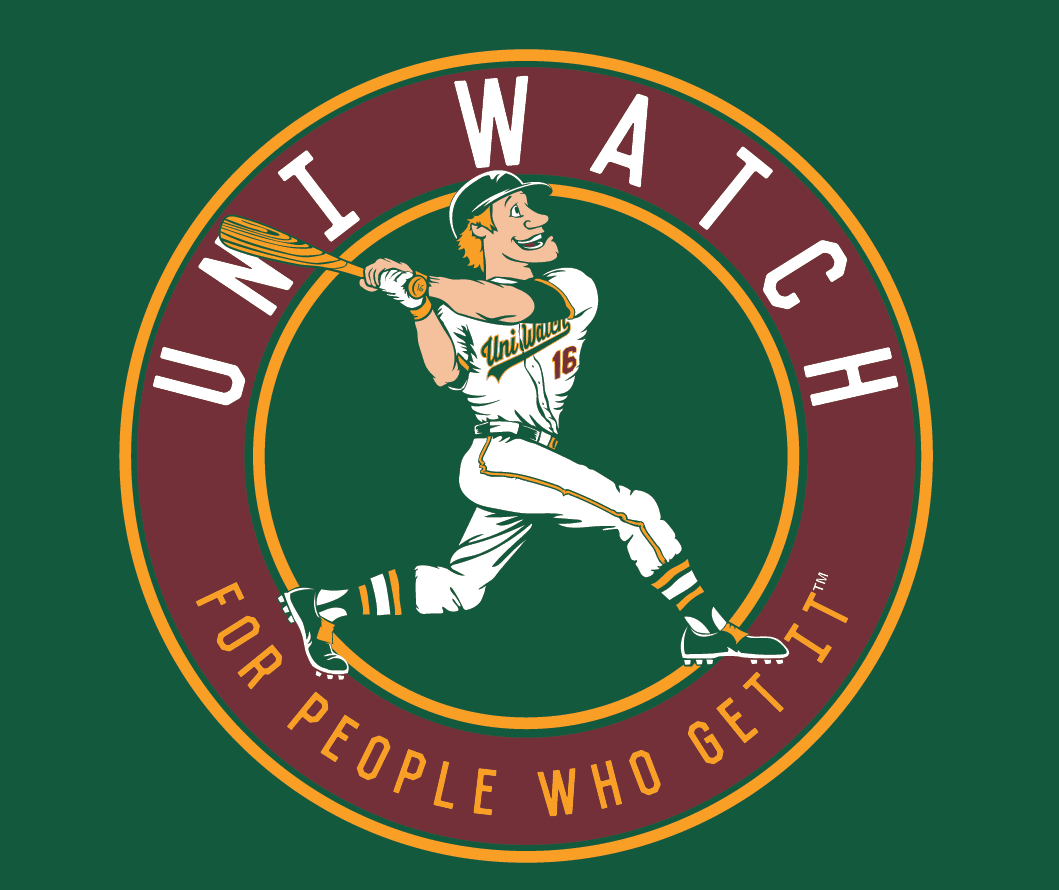 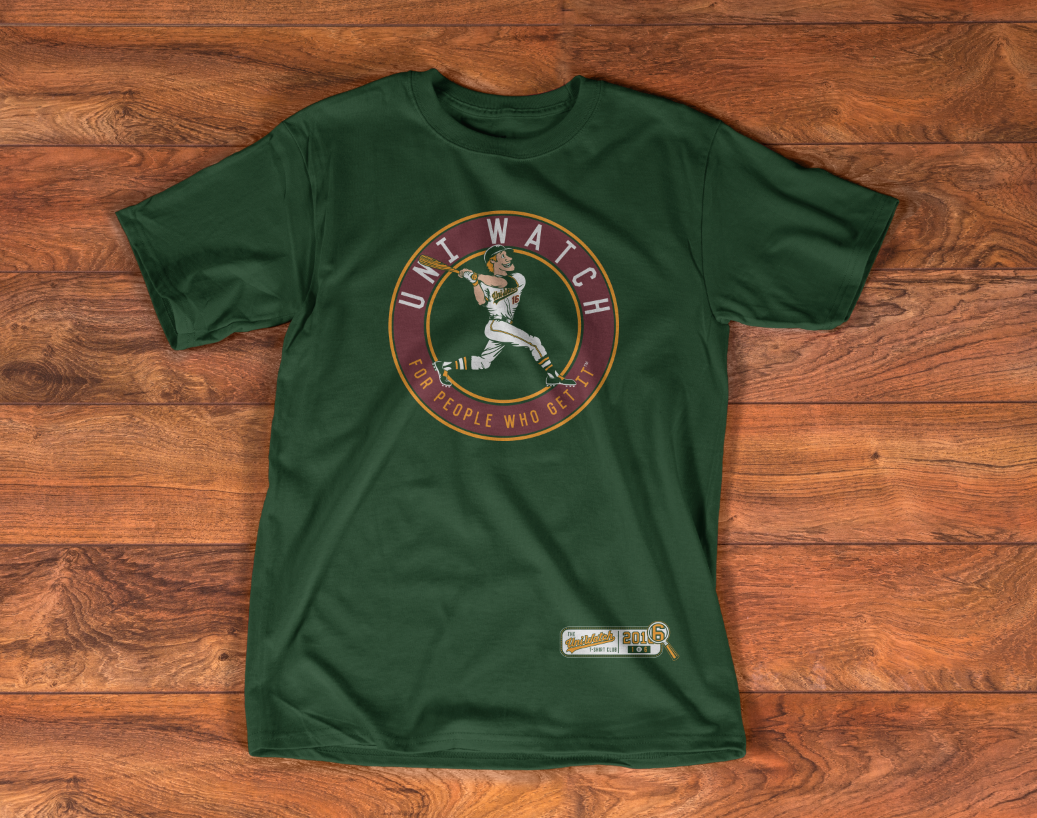 The Uni Watch ballplayer shown on the shirt is intended to evoke a time when sports graphics and mascots were built around fun, not ferocity. And as you can see, he totally Gets Itâ„¢ when it comes to wearing his uniform, with lots of old-school details like a flapless batting helmet, one batting glove, picture-perfect stirrups, and more.

The shirt is available here. For further info on how the T-Shirt Club will work this year, click here. Thanks for your consideration.

Baseball News: The Great Lakes Loons have unveiled new logos & promos (thanks to Alex Dewitt) and here are their new uniforms (thanks to MiLB Promos). Alex adds, “New custom font (supposedly). They dropped the BFBS and deep red uniform for an awesome green/cream alternate. Apparently all the uniform elements are stitched not screened (the old ones had a lot of screened elements). The Wilson uniforms don’t have the awful Majestic butt flap on them but alas…no stirrups for your enjoyment.” Here’s a bit more about that. … “A school from my hometown (Baytown, Texas) just introduced these new jerseys that are ‘faux back’ and supposed to be worn for every home game,” says John Parker. … North Texas Softball wore tequila sunrise throwbacks yesterday (h/t Paul). … CSU (that’s “Charleston Southern” for those of you who don’t hover over the link) is going with gold helmets, new baseball tops too. Will wear #Emanuel9 memorial on helmet/jerseys (via Paul from Daren Stoltzfus). … One really nice jersey and softball top are some newofferings for aTm baseball (h/t Texas A&M Baseball). … These are the uniforms Indiana U baseball will be wearing this season to honor vets (from Kevin Luchansky). … Tweeter Nick Yelverton says he has never seen this Cubs logo with Toronto Blue Jays font. … The Oklahoma State Cowgirls have a pretty sweet all-orange uni set they call “Orange Crush” (via Clay Billman). Not sure why the hell they need swooshes on the sanis tho.

Hockey News: The Sudbury Wolves played Superhero on Friday night and played the part as they won, 7-3, over Saginaw. … What are these? Well, those are the Pensacola Ice Flyers “Blue Wahoos” unis from last evening. It’s a crossover type thing, as the Blue Wahoos are a baseball team in the Southern League and are the Class Double-A affiliate of the Cincinnati Reds. … Sometimes (all the time?) these pink in the rink things go too far (that’s the Adirondack Thunder and Reading Royals from last night). H/T Thom Pucks for that (I think). … The Vancouver Canucks broke out their “flying skate” throwbacks last night (pic from Brian J. Altemeier), who notes that “Henrik wearing just a 90s shell over current pants.”

NBA News: As a retirement gift Nike presented Kobe Bryant with 30 pairs of the iconic Air Jordan sneaker, including some customized for the NBA star (thanks, Brinke). … Also from Brinke, Dime Magazine has “Redesign(ed) Every NBA Logo As Each Team’s All-Time Best Player.” … Tyler notes Panini was “Repping a Kobe jersey he didn’t even wear due to injury.” … Oops — looks like an upside down “2” on Khris Middleton’s uni (via Cory Enayat). Or was it a backwards “5” (h/t Sandy Dover).

Soccer News: Stoke City broke out a new third jersey during yesterday’s match (h/t Josh Coles). I bet those jerseys were lucky, since they beat Bournemouth 3-1. … Switzerland has a new jersey (via Tim Cross), who adds, “Nice new Swiss jersey, but damn do they need a new crest.” … Napoli’s Callejon wore his socks inside out in the match vs. Juventus (via Yosef Piperno).

Grab Bag: “Great spare tire cover or greatest spare tire cover?” asks Brandon Sparks. Meh. … Here’s UNC lacrosse with navy blue helmets and Carolina blue argyle. James Gilbert notes this is “NOT a football team option.” (Thankfully — the argyle stripe on the white and Carolina Blue helmets are more than enough — PH). … Woody Cain, Radio News Director for Motor Racing Network, notes they will be remembering Barney Hall all year long (via Jeff Lagro). … “15 Years Ago: “He Hate Me” got most publicity, but there were other unique XFL jersey backs” (h/t Robert Hayes). … Carl Edwards lost the W off his windshield during the Sprint Unlimited (via JayJay Dean).

And that’s it for today — big thanks (again) to Matt Powers for coming through. Make sure you give him a “thanks” below in the comments for being a good friend to UW all these years and for the sneaker review. I had thought this might be longer (what, Phil, it’s not long enough???), but I had to make an emergency visit to my mom’s house for a good chunk of yesterday (last year’s cold winter caused her a frozen and busted water pipe) so I was helping her take precautions to (hopefully) avoid a repeat of that scenario during what is an extremely cold snap the northeast is currently in. In my condo I had the heat on full blast and two space heaters and it was still cold. Hope everyone in the arctic blast zone has heat & hot water! It’s going to be a MIGHTY chilly curling experience tonight.

Everyone have a great Valentine’s Day and a better week and I’ll catch you next Saturday. Till then,

Carl Edwards losing his W off his windshield isn’t that shocking…it happens a lot more often during races than most realize.

Also, this hasn’t been mentioned, but in NASCAR’s Xfinity and Camping World Truck Series, the driver names are on the rear window, as opposed to the front.

While I agree it’s not shocking, it is at least odd that he loses just that specific letter often. I mean, I understand if he lost other letters, but to just lose the W repeatedly? What’s up with that?

I can’t be the only one bothered by the horizontal rule placement on that NBA best franchise player mascot page, right?

Wisconsin also wore throwbacks v Maryland. And are we sure that UNC lax helmet is navy and not matte black?

Great job, as always…and thank you for asking me to do this, yet again…I am honored.

As for the UNC lax helmet, it is, in fact, navy…They have traditionally worn the Cascade models, most recently the R. However, many of the Nike/STX uniformed schools have gone to the STX STallion helmet for this season…

Thanks for a great preview Matt! Best of luck to you with whatever you are dealing with.

I don’t think the “Pink the Rink” (or whatever color) ever goes to far. Think about it: minor league teams need a way to draw a crowd, so a good way to do that is to create events that you don’t often get a chance to see. Where else can you see a pro hockey game played on pink ice? Yes, we see them a lot on this website, but it’s not like this Adirondack team is doing it every week…we just happen to be aware of minor league teams all over the country doing it, so it seems like a lot. It is probably a once a year thing for the teams that do it, so it is something special for the fans (and people it benefits).

Also, I once went to a Portland Winterhawks game around St. Patrick’s Day because they made the ice green. Why? Because it sounded like it would be something kind of interesting to see. And it was. And that was the only time they did it during the long season.

Ummm….John Wall’s contract expired with adidas and he has been wearing Nikes and Jordans this year…

IMHO, the officials should have required Missouri to change uniforms. They had to know Tennessee would be going orange. >:(

Another year, and again no Pumas or Starburys to be found in the All Star Game. Heavy sigh.
Great job as always, Matt. Hope you’re doing well and that the tradition will continue for years to come.

Home plate on that spare tire cover is backwards.

Great article. Quick addition, though: LeBron James is wearing the LeBron 13 Low in the warm-up picture, not the normal 13s.

John Wall no longer has a contract with Adidas, so I would be surprised if he wore those sneakers. Yesterday he wore the All-Star Nike Foamposite in practice and I wouldn’t be shocked if he did the same tonight

Ryan Miller looked awesome in his special gear to match the 90’s look. Even though the V is a bit more 80’s, what the heck, it matches, it’s retro, and it still looked great.
link
link
link
I guess three things of note jump out to me, as a goalie and hockey nerd on Uni Watch:
1) I don’t think Miller got new sticks. In one of those pictures, the CCM writing looks green, which goes with the normal uniforms.
2) Miller is also using a black shell over the normal blue breezers. Not surprising at all, because pants take quite a bit of break-in work. For just one game, I’d bet everybody did this.
3) While I’m not surprised Vaughn made him a blocker in vain, I am surprised Miller used this chance to use the CCM E Flex Pro 2 for the first time. This year, Miller moved to the CCM Premier blocker, but before that and from since his very final year in Buffalo, Ryan Miller’s setup was the CCM E Flex Pro 1 (emphasis on the 1, not 2) alongside Vaughn everything else.

I did think it strange that he was wearing Northern Lights Foamposites in practice the other night!
Oops…

Great article! I’m not into sneakers, but I thoroughly enjoyed this!

All Star game uniforms are pretty good, as far as all star uniforms go.

The KIA jersey ad sucks tho.