Paul here. I don’t usually show up on weekends or in August, but I’m providing this weekend’s content because webmaster John Ekdahl, who had been handling the August weekends, just became the proud papa of a baby boy. Congrats to him and his wife, Amy, on the new addition to their family.

So: Some new NBA jersey patches are surfacing via video game highlight screen shots. First up are the Raptors, who are hosting this season’s NBA All-Star Game and will be wearing a patch for that: 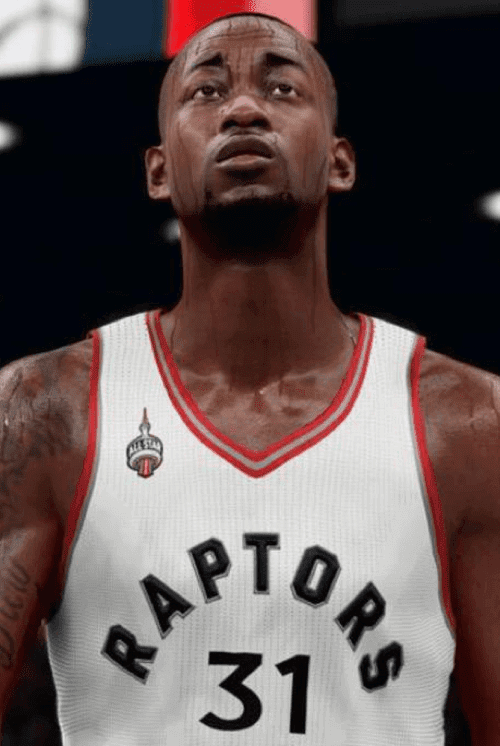 As you can see, the patch design matches the logo that was released three months ago. And of course this shot also gives us an early glimpse of how Toronto’s new home uni will look on the court.

In addition, it appears that the Bulls will be wearing a 50th-season patch: 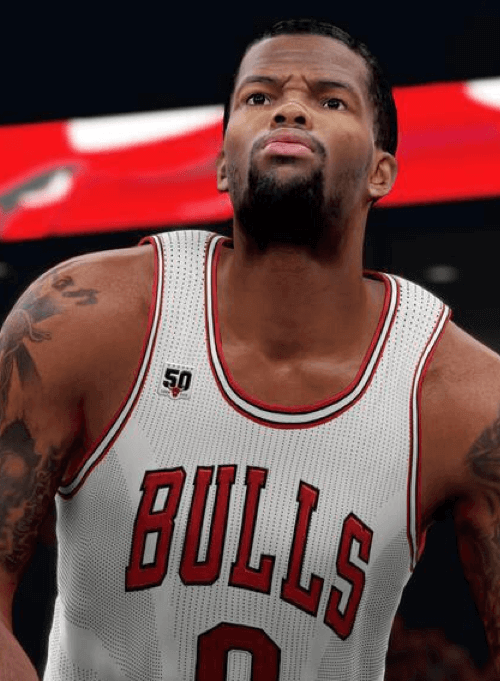 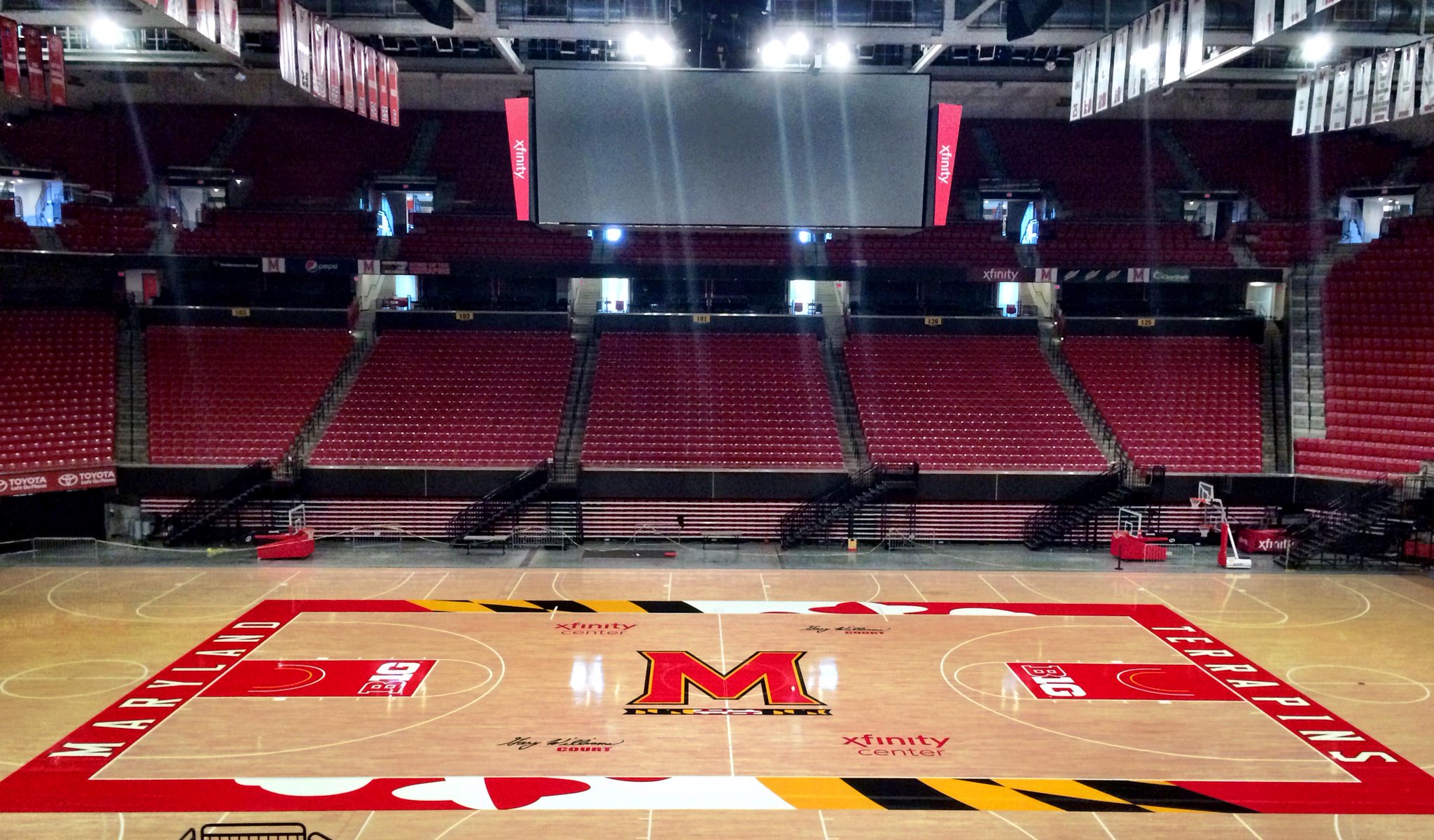 And speaking of basketball”¦: New court designs are beginning to trickle in as well, including the one for Maryland, shown above. Naturally, they’re calling it a “pride” design, but whatever.

Meanwhile, over on the gridiron: The Panthers and Pats played a preseason game in Charlotte, and there was a surprising irregularity in the field design. Can you spot it? Take a look: 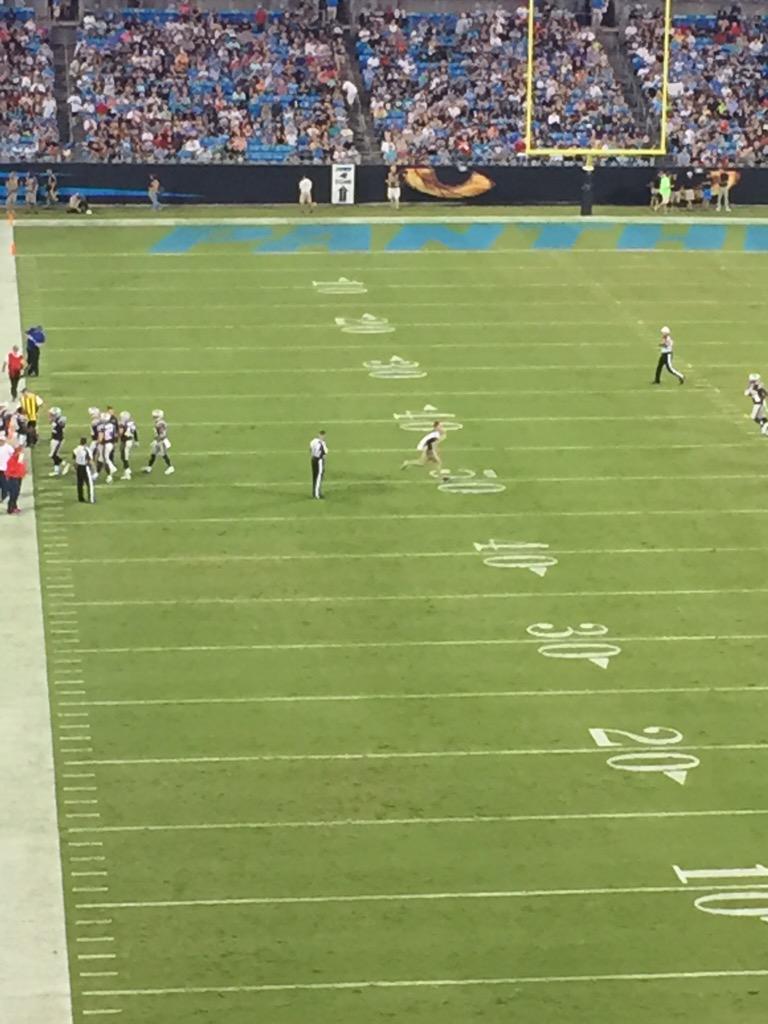 If you said, “Hey, the ’50’ yard marker was white instead of gold!,” give yourself a gold (or maybe white) star. The reason for this is apparently that UNC and South Carolina will be kicking off the college football season on this same field on Thursday, while the Panthers won’t be playing at home again until Sept. 20. Still, is it really that hard to repaint the numerals? After all, they’re presumably going to repaint the end zones, so why would a few numbers present a problem? Personally, I don’t like the look of the gold 50 markers, so I’m glad they went with white, but I’m still surprised.

(Thanks to Jonathon Hancin for the screen shot of the field.)

And as long as we’re talking football”¦: As most of you probably know by now, my annual college football season preview was published a few days ago, but additional news continues to come in. For starters, yesterday Iowa provided a sneak peek of the blackout uni they’ll be wearing on Nov. 14 against Minnesota:

Sneak peek at the Blackout unis being worn in @kinnickstadium on 11.14.15 | #Hawkeyes https://t.co/jRaveOY9hS 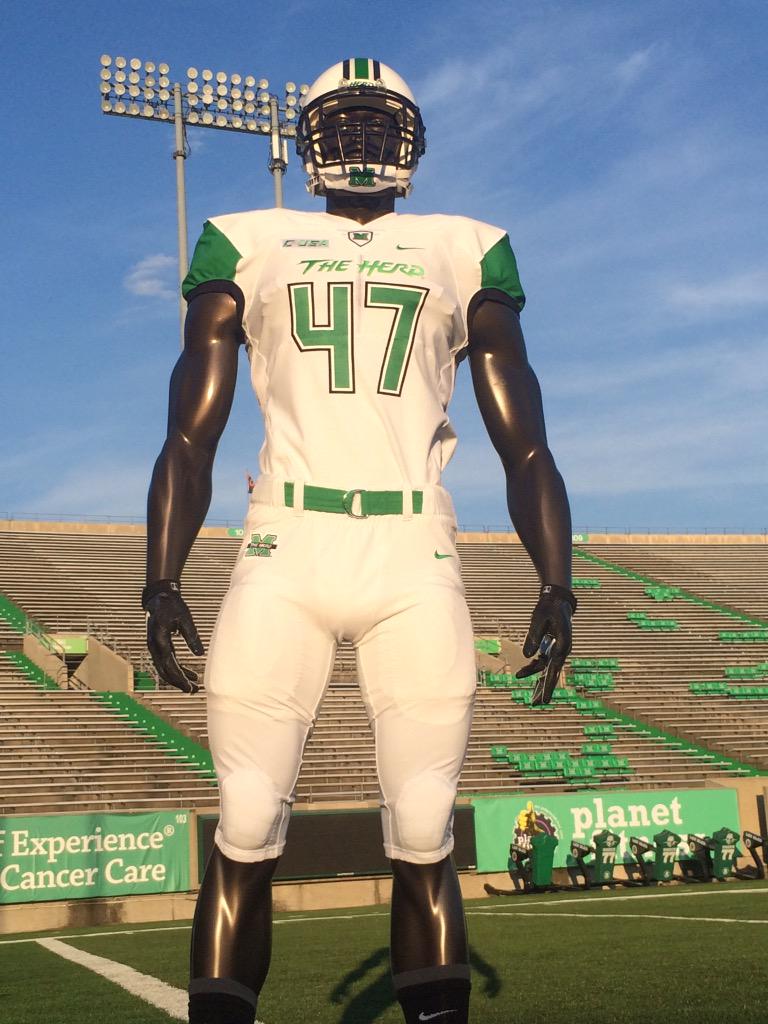 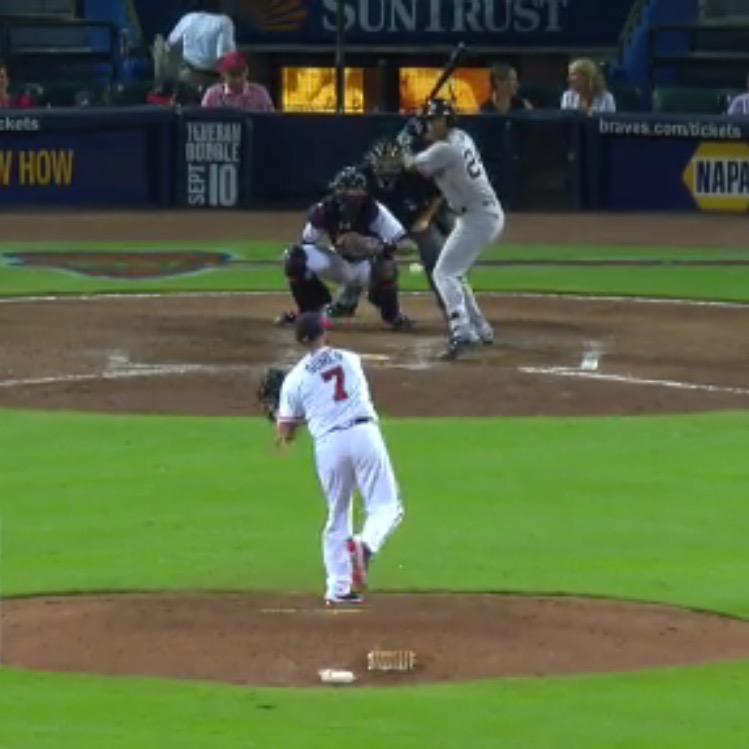 Let’s throw in some baseball while we’re at it: The Yankees blew out the Braves last night to the tune of 13-3, and things got so out of hand that Atlanta put outfielder Johnny Gomes on the mound, providing us with that rare phenomenon, the single-digitized pitcher.

(Thanks to Mike Nessen for the screen shot.)

Not a uniform, but still”¦: One of the most familiar sights in sports is that of the Goodyear Blimp. But that sight will soon be changing, because Goodyear is retiring its current blimp fleet and rolling out a new generation of blimps — although, technically speaking, they won’t be blimps. Full details here.

That’s it for today. See you back here tomorrow. ”” Paul

The white “50” is more interesting in light of the fact that not only would the end zones need to be repainted for Thursday’s game, but the hash marks in college are farther apart and field numbers are ideally halfway between the hash marks and sideline. Therefore, the entire field in Charlotte will need a repaint prior to the college game.

Numbers halfway between the hashmarks and the boundary? I’ve never heard that one before. I learned here that the bottoms of the numbers have to be 20 yds from the boundary, so I always figured that’s where the numbers go. So getting back to your idea of having to repaint the whole darn field, I seriously doubt that. Just spray on new wider hashmarks for the NCAA and you should be good to go, right? I mean, Heinz Field is overused to accommodate the Steelers and the Pitt Panthers, and I’ve never heard the groundskeepers having to work too too hard on painting. (Sodding, though? Hell yes.)

Good article on the blimp, this thing is legendary.
It made an appearance in a 1970’s movie as well, I can’t remember the name of the movie but it was about the Superbowl game being a target for an attack. The Goodyear Blimp was where shit went down and you got a glance of what it looks like inside the gondola.

The Super Bowl footage in that movie was filmed during an actual Super Bowl game, specifically Super Bowl X between the Steelers and Cowboys at the Orange Bowl in Miami. The actors were actually on the field during the game and the film cameras were disguised as TV cameras.

Pretty sure the movie is “Black Sunday”

Here’s a clip from the movie. Saw it in the theatre when I was 11 (also read the book).

I remember they used some game footage from Supe X too (Cowboys vs. Stillers) and that was when they played the game in the daytime.

Yes that’s the movie I was thinking about. I watched it for the first time in February of this year. Fascinated by actual scenes from the game and if Hollywood needed permission by the NFL to do so.

“Pride” court/uniform/whatever: Teams that use this particular marketing BS are actually saying their previous/regular Unis or courts or whatever do not express pride in the team, school, or community. Pretty damning admission.

Goodyear blimp retirement: I’ve been hoping for dirigibles to return to the skies since literally fifth grade. About time!

There’s only one quibble I have with the new blimp airship: it’s too quiet. When the old blimps flew over our house, you could hear them coming with plenty of time to get outside. Now, if you’re not careful, Wingfoot One could sneak right on by you.

Both old and new flew circles over my backyard last week.
link

Yeah, we always liked to watch them fly overhead when they would be traveling back and forth from their base in Carson to Northern California sporting events.

Shame about the old Goodyear blimps; those are handsome craft. The Zeppelin NT airships replacing them are interesting too. They’re somewhat larger and have three tail fins instead of four (two horizontal, one vertical), and have a triangular internal frame.

Semi-rigid airships were never very ubiquitous or successful, although one, the Italian-built Norge, was the first aircraft to reach the North Pole. Zeppelins (rigid airships), of course, fell out of favor after the Hindenburg disaster, which was several years after the U.S. gave up on them following the loss of the Akron and Macon.

I’ve always hoped that someday we’d see a zeppelin again, but I guess the the semi-rigid Goodyear Zeppelin NT is the best we can hope for…. :)

Congrats to Mr. Ekdahl on the new addition to the Uni-verse.

and the amazing Goodyear Zeppelin…

Without the NBA Logoman on the otherside to even it out, the NBA patches make the jerseys look lobsided, IMO.