What Do Hispanic Fans Think of Hispanic Heritage Jerseys? 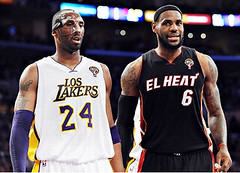 Hispanic readers of the Uni Watch Blog were recently invited to share their thoughts about “Los” and “El” jerseys as opposed to jerseys with directly translated team names like “Cerveceros.” Here are some of the responses that came in. — Paul Lukas

“I prefer Spanish translation jerseys, at least where the team name can be translated. I just wish more teams attempted to make more of an effort in translating them. My friends and family feel the same way. It actually motivates them to buy a jersey with a Spanish team name on it, instead of just adding ‘El’ or ‘Los’ to the English name.” — Paul Soto

“I don’t like names like Los Lakers and El Heat because I consider lazy and it looks more like Spanglish, not proper Spanish. Not all names can be accurately translations, so I get the point of not being able to translate everything.” — Carlos Ahmed Jalife Ruz

“I definitely prefer the direct-translation approach. I look forward to seeing teams going that route and interested in how they look on the jerseys. I’m a Yankees fan but would love to see the Mets go with ”˜Metropolitanos’ for a game. How cool would that be? The ‘El/Los’ approach is a cop-out. I understand, and respect, that a lot of the Spurs’ Hispanic fans actually refer to the team as ”˜Los Spurs,’ but I know that they would also get a kick out of seeing ‘Espuelas’ on the jersey.” — Alex Melendez

“If you’re going to do it, why half-ass it? There are Spanish words or terms for the team names. For example, using ‘El Heat’ looks stupid and sounds even worse. I think if they put ‘Calor’ or ‘Fuego.’ it would look a lot better.” — John Romero

“Personally, I like the direct translation. The ‘Los’ thing seems like a cop-out and it’s annoying. The direct translation is more correct and more interesting and fun, especially when the translation is something like Cerveceros. I almost wished I was a Brewer fan when I heard that one. … Overall, though, I generally find these jerseys patronizing, and the realist in me knows that in the end it’s just to sell more apparel. I’m not more proud to be Hispanic when teams do this, and I don’t feel honored in any way. There’s one that I believe is very offensive: The Dodgers actually sell licensed ‘Los Doyers’ apparel at Dodger Stadium. In case you don’t know what that means, Doyers is how a Hispanic person with an accent says Dodgers. And you see these all over town, I find it shocking that the Dodgers of all teams would do this, especially when such a big part of their fan base is Hispanic.” — Pedro Naranjo

“In some cases they really cant do anything but use an ‘El’ or ‘Los,’ but jerseys like ‘El Heat,’ where they could have used a real Spanish word, are just lazy and lame. And I can see that the Mets don’t want to use a long name, but being the Metropolitanos for would be way cool. Great job by the Brewers and Giants by using a longer name and getting it right.” — Angel Ramos

“I was born in Central America but moved to the States when I was five. We discovered baseball through WTBS, so we became fans of ‘Los Bravos.’ My dad called them that and it stuck with us. I always thought it was funny because ‘bravos’ means ‘angry ones.’ We still call them that. Our other favorite team, however, has always been ‘Los Cowboys,’ not ‘Los Vaqueros.’ I don’t know why we translated one and not the other, but my brother and I never questioned it.” — Daniel Caceres

“All these jerseys are stupid. I’ve always felt it is more of a marketing ploy to sell more jerseys than a way to honor Hispanics. Using ‘El’ or ‘Los’ just seems lazy. I’ve heard the argument that even when speaking Spanish, people refer to the teams by their English name. But from my experience, people use the English and the Spanish names interchangeably. … Translating the name is definitely better, feels like more thought was put into the whole gimmick.” — JesÃºs Garza

“I like the direct-translation method, since they’re not adding extra words to the logo. Same logo, just different language. … You have to like Cerveceros and Gigantes. If the Bulls went with Los Toros or just Toros, that would be great too. If they’re going to try it, either go all-in or don’t try it at all.” — AdriÃ¡n E. Richner

“I think the Spanish language jerseys are too gimmicky. That said, if forced to choose, I’d definitely side with the translated names over the ‘El/Los’ variety. The latter just strikes me as lazy.” — Carlos Borge

“I’ve always viewed it as some sort of joke. The NBA’s use of ‘El’ and ‘Los’ in particular is very cheap, tacky, lazy, and plain ignorant. It’s such a joke that some friends and I are trying to convince one of our other Hispanic friends who recently moved to Salt Lake to start a ‘Los Jazz’ movement to get Utah to join in this farce. I would much rather see a literal translation of the names. Otherwise it feels like a cop-out. I was born in McAllen and raised in Harlingen in the Rio Grande Valley of Texas, where Spanglish and TexMex are a widespread issue. People will often mash the two languages into a confusing and incoherent cluster that leaves visitors to our area thinking there is a serious problem with our intelligence. The ‘El/Los’ approach feels way too much like that. Very uneducated.

“On the other hand, I was watching NBC’s Sunday Night Football and saw them use a literal translation of a team’s city name and team name on their opening graphics, and I thought it was very well done, classy, and a subtle nod to Hispanic Heritage Month without insulting our intelligence or going way over the top.” — Victor Esteban Quintana, Jr.

“I prefer the direct-translation method, because it feels more genuine. I appreciate that teams such as the Brewers are willing to wear a name on their jerseys that might not be similar at all to their names in English. Simply appending a ‘Los’ or ‘El’ to their jerseys, while better than nothing, feels more like tokenism for marketing’s sake rather than actual concern for the Latina/o community. I have never discussed this topic before, so I appreciate your willingness to ask the question.” — Daniel Shank Cruz

“As a Mexican-American man , I love these jerseys. When my Spanish-speaking family refers to a team’s name, they don’t ever change the team name to the Spanish translation. I’ve never heard ‘Los Lagunas’ for the lakers or ‘El Fuego’ for the Heat. The way they do it on the jerseys is the way any Hispanic who speaks Spanish refers to the teams.” — Noel Fernandez

“I do prefer the translations. It feels like the team made more of an effort. I once saw a Mexican TV broadcast of a Raiders-Oilers football game as a kid, and the graphics and announcers called them Los Petroleros (Oilers) and Los Malosos (Raiders). It always stuck with me as something cool.” — Jaime Galindo

“I think Hispanics, including myself, prefer the ‘El/Los’ approach, because it does not change the team name. Saying ‘los Yankees’ is the same as saying ‘the Yankees.’ If we met a non-Hispanic person named George, we wouldn’t call him Jorge. When you say ‘los Gigantes’ instead of ‘los Giants,’ it sounds very silly. … The name of a team carries a lot of identity and is important to the story of how the team first came to be, it should not be changed for anything.” — Leslie Rodriguez

“I appreciate the effort, but the whole thing is hilariously awkward.” — Juan Alvarez

“I’m half-Mexican, and have always thought the ‘El Heat’ and ‘Los Lakers’ uniforms were half-baked marketing attempts. They do seem more patronizing than celebratory. The Brewers do it right, going with an actual Spanish translation of the team name. Why don’t other teams do this? It’s almost as if the NBA is afraid we won’t know what ‘El Calor’ means. Does the NBA think we’re that dumb? That, perhaps, is the most patronizing part of it all.” — John Mindiola III

“I’ve lived in Miami for seven years now, and I don’t know of anyone who calls the Heat anything other than ‘Heat.’ So if they want to do the Hispanic thing, ‘El Heat’ makes sense. Same goes for the Lakers, Mets, Dodgers, and a bunch of others. However, while I appreciate the idea of trying to broaden a team’s appeal, I tend to think that changing the uniform is not the best way to go about this. It feels a bit gimmicky, in the same way the Red Sox’s red jerseys feel gimmicky. I simply would prefer that they didn’t mess with the uniform. Have a Hispanic celebration event at the stadium, but leave the uniform alone.

“Actually, the whole “Hispanic Heritage” theme feels a bit misguided to me. ‘Hispanic’ or ‘Latino’ defines a very disparate group of nationalities that have been grouped together because they have one thing in common: They speak Spanish (and even that one thing is not exactly universal among Hispanic countries). For example, culturally, Puerto Rico and Chile are tremendously different, but they both need to fit into the ‘Hispanic’ group, because they both speak Spanish. It’s not really apples-to-apples, but I feel like a Hispanic night at an MLB game that tries to celebrate all these cultures is like a hypothetical “Anglo night” at a stadium in Caracas, where they ‘celebrate’ Americans, Canadians, and Australians all in one big party for former British colonies that speak English.” — Pablo Souki

“I’m half Guatemalan, and my overall feeling is that it’s just a big marketing ploy to sell more merchandise. But if I had a preference, it would most definitely be to translate the name properly. I think ‘Cerveceros’ is at least a million times cooler than ‘Los Mets.'” — Charles Neiswender