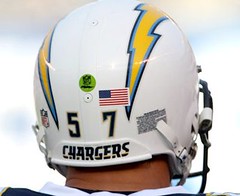 As your brain shifts back into football mode, you may find yourself trying to remember the answers to certain uni-related questions that seem to come up every year around this time. For example:

What’s with the green dot on the back of some players’ helmets?
It indicates that the helmet is wired for radio. Each team is allowed one radio-equipped helmet on the field at a time.

What’s the deal with the different-colored stars on the captaincy patches?
The gold stars indicate the number of seasons the player has participated in the captaincy patch program, which began in 2007. It’s not clear what will happen to the patch design after next season, when they’ll have used up all four stars, but the league supposedly has a plan in place for that.

Speaking of the captains’ patches, how come some teams don’t wear them?
The patch program is voluntary. The Steelers have never participated in it, and the Packers have done so only in the postseason.

How come the uni numbers on the front of the Steelers’ helmets were missing during the preseason? Have they scrapped them?
The Steelers do this every year. You have to “earn” your helmet number by making the team. The numbers will reappear this Sunday, guaranteed.

My favorite team has two guys named Jim Smith and Bill Smith, but they both just have “Smith” on their jerseys. Shouldn’t they have “J. Smith” and “B. Smith”?
First initials for same-surnamed teammates have been optional since the 2007 season.

Is there a page where I can see which uniform each team will be wearing for each game?
Nope. But four teams have put their 2009 jersey schedules on their web sites: the Bengals, Chargers, Panthers, and Texans. Would be nice if more teams did this.