The Legalities Surrounding the Phillie Phanatic 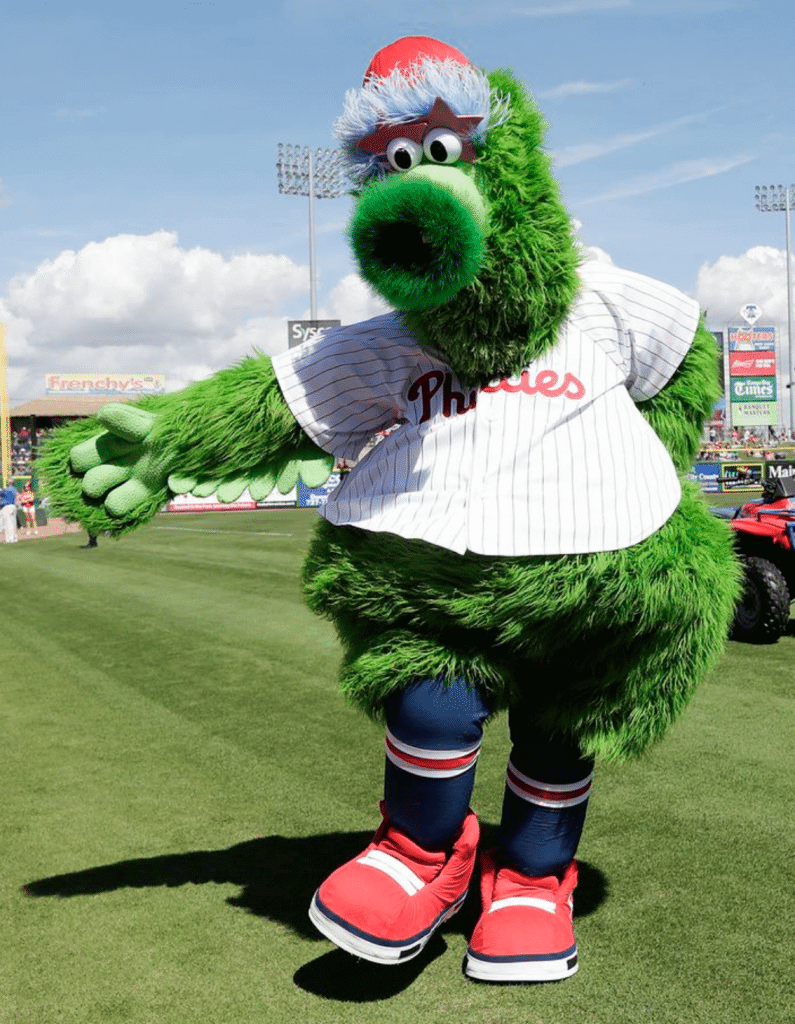 [Editor’s Note: Uni Watch reader James Ryan is an intellectual property attorney and has written this primer on the legal issues surrounding the Phillie Phanatic. — PL]

What is a copyright?

Copyright is a form of intellectual property for creative works, such as art, books, music, etc.

What is intellectual property?

Intellectual property is different. Let’s say it’s a unique design of the hat, and I see you wearing it. I go home and make a replica of a hat. Now we both have it a copy of the hat. We both can possess the creative work fully and simultaneously. If you want to have sole possession of the idea, then you need outside help to stop me from doing it. That is what copyright and other intellectual property are: something from government saying they will step in to help you stop others from using your ideas.

In addition to copyright, there are two other types of intellectual property: patents (for inventive works) and trademarks (recognizable design to identify products or services).

What is the purpose of copyright and intellectual property?

The United States Congress is empowered to grant patents and copyrights to “promote the arts.” Promote really means make money. The idea is that more creative works will be made if creators can make money off their work. So it has nothing really to do with accreditation. Taking a recording of a song, uploading to YouTube, and disclaiming “I do not own the rights to this song” still infringes on the owner of the copyright to make money.

So what’s the copyright issue with the Phillie Phanatic?

Briefly, designers Wayde Harrison and Bonnie Erickson (let’s call them H&E) are claiming they are sole owners of the Phanatic copyright, that they licensed their design to the Phillies in 1984, and that they are now reclaiming their copyright in accordance with the 35-year sunset provision in the law, which kicks in this June. The Phillies negotiated for another license but H&E refused the team’s initial offer, so the Phillies took them to court claiming they are co-owners, among other things.

What is the “sunset provision” in copyright law?

Usually, the leverage belongs to the buyers of creative work, not with the creators. Think of all the teams that offer a free jersey (or “exposure”) to fans who design a new logo or uniform. Why pay a creator a lot of money when there is so much competition? So the law allows creators to claw back their rights to renegotiate after 35 years, when they would have more leverage. The idea is, if their creation takes off and is worth millions, creators deserve more than a few thousand dollars. Importantly, this right of the creators is inalienable, meaning the creators cannot contract this away in the initial agreement.

Well, are the Phillies co-creators of the Phanatic?

That’s yet to be determined. The Phillies have a tough case to prove. If a court decides this at all, it’ll be all about the documents. Discovery of those documents is still ongoing.

The Phillies tried a bit of a redesign of the Phanatic this winter, but I don’t see too much here from a legal standpoint. The law embraces common sense. Will you find anyone who looks at the new Phanatic and thinks, “unrecognizable”? We at Uni Watch love looking at the small stuff, but I think we can all agree the changes are not that significant.

The slight change of eyes and shaking a tail feather of a slightly different color are not significant enough changes for the Phillies to claim that they are not infringing the copyright. The Phillies are not going to use this Phanatic on June 16 without a new agreement — that would risk copyright infringement.

So what do the changes accomplish? The Phillies may hope the court will now consider them as co-creators, but that’s a dubious argument in my opinion. If the changes have to do with the lawsuit, then it’s probably about the negotiations. The Phillies might be trying to get some leverage by sending a warning shot that they could move on if necessary. The Phillies can also say at negotiations that maybe they will win the Hail Mary and get guidelines from the judge on how to move forward with the Phanatic without infringing H&E’s copyright.

What about the character of the Phanatic? Can that be copyrighted, like Mickey Mouse or Batman?

Characters with certain personality traits can be copyrighted, but it’s much harder to do. Remember that copyright excludes others from using that character. So if you copyright “mascot that dances with his stomach, plays pranks on opposing players, and shoots hot dogs from an air cannon,” then that would mean that there are no other mascots that can do the same thing. That’s not for the public good. Rather than promote the arts, it is likely to stifle it.
But even if the Phillies could copyright the personality/character of the Phanatic, it would not necessarily give the right to the Phillies to use him. Remember, copyright is something from the government that they will stop someone from using your creation. It doesn’t give an affirmative right for you to use it yourself. In legal terms, copyright is a negative right, not a positive right.

Is it possible for the Phanatic be a “free agent” and be a mascot for a different team?

I don’t think H&E will be able to sell their design to any other team. The Phillies, even if not co-copyright owners, have a strong case to say that they have a trademark on the Phanatic (trademark is another form of intellectual property). Meaning, because of the marketing of products, productions, and other imagery of the Phanatic with the Phillies, the public has inextricably identified them together. Having the Phanatic promoting another team would confuse the public, something that trademark law is designed to prevent. So in my opinion, there is a strong case that the Phillies have a trademark on the Phanatic.

But again, even with the trademark, it doesn’t give the Phillies an affirmative right to use the Phanatic. It would just prevent another team from doing so.

So what’s going to happen?

The current license ends on June 15. If there is no deal, the Phillies risk copyright infringement if they continue to use the Phanatic. The Phillies would likely prevent H&E shopping their design of the Phanatic anywhere else. So, without a deal, the Phanatic might be shelved altogether.

But I don’t think that will happen. I think a settlement is extremely likely. There are too many good reasons to settle and too many financially catastrophic consequences for both parties if there isn’t one. It’s just about how much money the Phillies will pay. But neither side is in much rush until that June 15 deadline. Since the Phillies don’t play on that date, I would anticipate some kind of “signing” ceremony with the Phanatic on either June 14 (when the Phils play the A’s) or June 16th (Marlins). That would be fun!