Eating for the Cycle 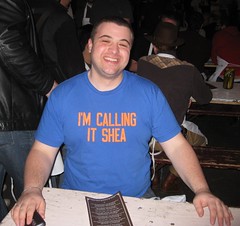 I went to college in Michigan, where I learned about “eating for the cycle.” It was supposedly a tradition for some elite Tigers fans, although only one person ever managed to do it before I did it. It is not a widely known ritual, but its legend (at least among my friends) has grown.

The rules are simple:

1. You have to eat one food item every inning for nine innings.

2. Whatever you’re eating at the beginning of the inning, you have to finish eating it by the end of the inning.

4. Drinks don’t count; they do take up space in your belly, though, so beware of them.

5. Frozen foods only count if they are clearly more solid than liquid and need to be eaten with a non-straw utensil. Ice cream is OK; Slurpees are not OK.

6. Food must be purchased at the stadium where the event is taking place and cannot be brought in from outside.

7. You can purchase more than one food item at a time — a hot dog and a bag of peanuts, say — and eat them in separate innings.

8. All food must be purchased by the contestant — you cannot have friends or seat neighbors bring food to you while you remain in your seat. Buying food from a passing vendor, however, is fine.

9. If you puke, the event is over. This may require monitored bathroom breaks for scoundrels.

10. If the game goes to extra innings, all the same rules apply, much like the case of a prefect game.

Those are the rules. I’m told that a guy named Tom Blaske once did it many years ago. Aside from him, I’m the only one who’s ever eaten for the cycle, as far as I know. Sadly, there are no photos or other documentation, but here’s what I ate at Comerica Park during a game in 2000:

The Snickers wasn’t traditional ballpark food, but it fell within the rules and was small enough to keep down.

Eating for the cycle isn’t easy, and not just because of the massive amount of food involved. Here are some tips and things to consider:

• Plan ahead of time. You should know where you’re sitting and which concession stands are nearby. Make a list of possible things to eat first and then check off items from the list. Otherwise, get to the game 30 minutes before the start and plan out your paces.

• Pace yourself. It’s one thing to say you’re going to have a hot dog, a hamburger, an Italian sausage, a chicken sandwich, a personal pizza, and a taco, but then you might explode or vomit. It’s about knowing how much you can eat and figuring out what’s big and what’s small. You will need to take it easy for some innings — that’s when you go for the ice cream or cookie.

• Some foods have immediate effects on your body. Eating ice cream quickly can give you a headache; eating super-salty foods might make you need a beverage (which does not count toward your cycle and just takes up space); eating meats in hard bread too quickly can hurt your jaw, so be careful with the Italian sausage.

• Some foods are difficult to eat quickly. When I did the cycle, peanuts were my Achilles heel. I love peanuts, but they take a ton of time to crack out of the shell, so you end up wasting lots of time cracking when you should be eating. I tried eating them shell and all, but peanut shells are really salty (not to mention dirty), so that made me super-thirsty. Also, the size of most peanut bags is generally big, so that’s a lot to get through in six outs.

• You’ll have to run to get food a few times during the game, and then eat whatever you bought, and then probably run some more in another inning or two. It can get hairy, so put in some cross-training time at the gym. Work on running and then lifting weights and then running again. Also, at home (not at the gym), work on running, then eating, then running — it’s harder than you’d think.

• A bad team with a weak offense is the enemy of the cycle. I still have nightmares of Tony Clark being up at bat with a man on 1st and one out knowing he would hit into the double play. I had to speed up my eating to get everything done in time.

• I think a good time to do this is when the stadium is not too full (shorter lines) and maybe during the day. A day game in early to mid-June is perfect.

One final note: As far as I know, eating for the cycle has only been done in the American League (only at Tiger Stadium and Comerica Park). It has never been accomplished in a National League ballpark — so far.