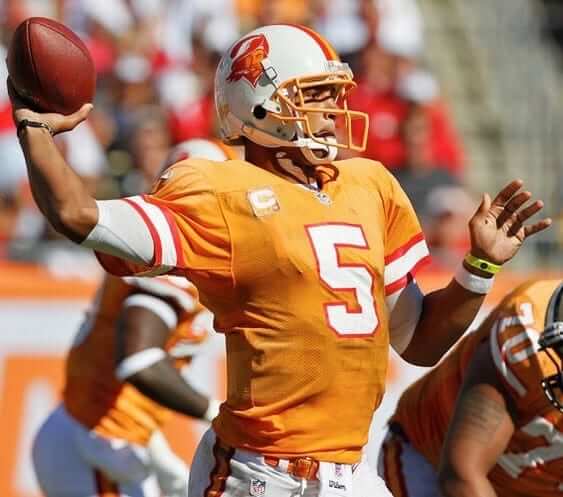 There appears to be a lot of confusion surrounding the NFL’s rule regarding multiple helmets. What follows is an FAQ-style explainer that attempts to sort out the facts from the misconceptions.

When was the rule enacted?

The rule came to light in September of 2013, when the Buccaneers announced that their “Bucco Bruce”-era throwbacks, which they had planned to wear later that month, were being scrapped because the NFL had quietly approved a recommendation by two of the league’s advisory panels — the Head, Neck, and Spine Committee and the Player Safety Advisory Panel — that limited teams from switching helmets during the season. The Buccaneers’ normal helmets are pewter and the throwback helmets were white, so wearing the throwback uniforms would have necessitated a new set of helmets. Teams had routinely used new helmet sets for throwback games in the past, but it was no longer possible under the new rule.

What is the thinking behind the rule?

The idea is to limit the number of helmets that players wear during a season, because new helmets can be unsafe if they’re worn fresh out of the box, without a lengthy “break-in” period.

Wouldn’t a new helmet actually be safer than an old one that’s gotten banged up over the course of eight or nine games?

That does seem somewhat logical, or at least intuitive. But those two advisory committees believe it’s safer, on balance, for a player to stick with one helmet for the entire season.

Don’t college teams often have, like, a different helmet every game?

It hasn’t quite reached that level yet. But yes, many college teams do have multple helmet sets, because the NCAA hasn’t adopted a rule similar to the NFL’s.

The NCAA apparently doesn’t feel the break-in period for a new helmet is such a big concern.

So is the NCAA putting players at risk, or is the NFL being over-cautious?

I’m not a neuroscientist, so I’m not in a position to answer that question. In 2013, not long after the NFL rule was announced, I interviewed a bunch of NCAA equipment managers from schools with multiple helmet sets, and they all said they feel like they’re doing a good job of protecting their players (although that’s pretty much what you’d expect them to say). I also interviewed an NFL equipment manager, who had a lot of interesting things to say about the NFL rule. I recommend that you read both of those pieces.

Does any other league or organization have a rule like this?

Yes. The Canadian Football League adopted its own one-shell rule in 2019.

The rule is just a case of the NFL covering its butt because it’s afraid of more concussion-related lawsuits, right?

That is a common speculation. I’m not in a position to assess whether it’s accurate. You probably aren’t either.

In the past couple of years, I’ve seen plenty of NFL teams wearing throwback helmet designs. Doesn’t that violate the rule?

The rule limits a team to one set of helmet shells, but the team can change the way that shell is decorated. For example, when the Bears wear their “Monsters of the Midway” throwbacks, those are the exact same helmets they usually wear. They just remove the logo decals and swap out the navy facemasks for grey facemasks, both of which are allowed under the rule. Same thing with the Bills’ throwback helmet — they just swap out the side decals and striping tape. The Broncos’ Thursday-night helmets are another example — same shells, different side decals and striping tape. The rule doesn’t limit teams to one helmet design; it limits them to one set of helmet shells.

If they’re allowed to swap out the facemasks, like you just said, why do the Packers keep the green facemasks for their throwback helmet, which doesn’t match the rest of the throwback uniform?

Good question. They really ought to switch the masks to navy, or grey, or something other than green. But their failure to do so has nothing to do with the NFL rule — they’re allowed to change the masks if they want to.

For example, if a player’s helmet is cracked or otherwise damaged or compromised, the rule does not require him to keep wearing the same helmet. He can (and should!) switch to a new one.

Based on my observations, it appears that players are also permitted to upgrade to a newer (and presumably safer) helmet model in the middle of the season. I have not heard this provision spelled out anywhere, but it appears to be the pattern, at least with a few players.

So you’re saying that there are exceptions to the rule.

I’m saying, again, that the rule is designed to minimize helmet changes, not to eliminate them.

Why does the NFL call it the “one-shell rule” if it doesn’t actually limit players to one shell?

Actually, the league doesn’t call it the “one-shell rule” (or the “one-helmet rule” either). That’s just a shorthand term that’s taken hold with fans and some writers.

If teams want a different helmet color for one week, why not just repaint the helmets, and then paint them back to the original color the week after that?

Modern helmet paints take too long to dry and cure. The helmets wouldn’t be ready in time, and the players wouldn’t be able to use them for midweek practices.

Why not wrap the helmets in colored vinyl? I’ve seen that done with cars, and it looks great!

Full-cover wraps are impractical and unsafe, because they make it hard to see if a helmet has been damaged.

Trust me, if there were an easy solution, they would have done it by now. Most equipment managers, who know a lot more about helmets than you or I, want to solve this problem, and I can assure you that they’ve gone through all of the obvious (and many not-so-obvious) approaches to it. If they haven’t come up with a solution, it’s because no good solution is available, at least for now.

With all the advances in helmet technology that we keep hearing about, is there a chance that the NFL might drop the rule?

Sure. But for now they’re sticking with it.

Didn’t a team recently try to get the rule changed?

Yes. At the owners’ meetings that took place in Phoenix in March of 2017, the Eagles proposed a rule change to allow teams to have an alternate helmet, which would have effectively killed the one-shell rule. But they later withdrew the proposal after team owner Jeffrey Lurie was told that it didn’t have enough support to pass.

I hate this rule! There are all sorts of great throwbacks (Pat Patriot, Bucco Bruce, etc.) that we don’t get to see anymore. Don’t they realize that they’re ruining throwbacks? And think of all the extra merchandise they could sell!

It’s funny — people often complain that the NFL trots out throwbacks and alternates just as a way to sell merchandise. But when the league does something in the name of safety — something that actually cuts down on the amount of merchandise, because it eliminates the possibility of certain throwback designs — people complain about that too.

Well, at least you’re honest about it.

What’s your opinion of the rule?

Like I said, I’m not a neuroscientist, so I can’t really evaluate the rule from a medical perspective. Do I miss some of those great throwbacks that we used to see? Sure. But if the rule really does increase player safety, it’s hard to argue with that.