Age Really Is Just a Number 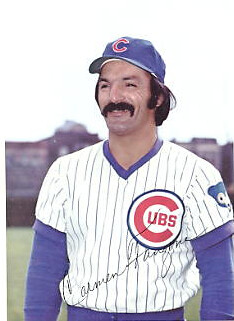 All the major baseball databases list Carmen Fanzone’s birthday as Aug. 30, 1943. But his Cass Tech student file consistently lists his birthday as Aug. 30, 1941. This is a common phenomenon in the baseball world, where many players have two ages — their real age and their “baseball age,” the latter of which they concoct to make themselves seem younger. Carmen laughed when I brought this up with him. “As an athlete, you only have so many years before they write you off, so you do what you can to extend your career,” he said.

Most players make the birthday adjustment while they’re still in the minor leagues (or even earlier, while in high school). But Carmen is unusual, because he managed to adjust his age during his big league career — twice, in fact. His baseball cards for 1973, ’74, and ’75 show three different birth years. This means he stayed the same age for three seasons — a pretty neat trick.

“The first card had the right year, 1941,” he explained. “The next season I convinced Topps [the baseball card manufacturer] that that was wrong, and they changed it to 1942. And then I don’t know how I got away with it, but I came up with some other cock-eyed story and convinced them that it was ’43.” That year apparently stuck, at least in the baseball record books. But not for Carmen, who went back to his real birthday once his baseball career ended.

“As soon as I retired,” he said, “I became two years older.”