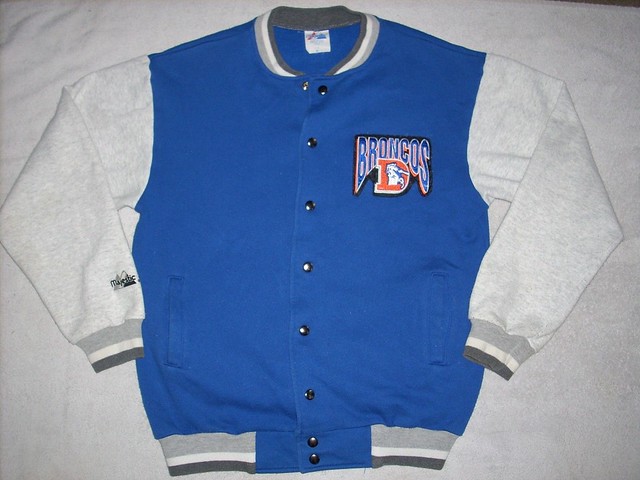 We’ll kick off this installment of Collector’s Corner with the two Super Bowl teams: Check out this nice-looking 1980s varsity-style Broncos jacket from Majestic and this Seahawks Puma coach’s sweatshirt, which I’d say is from the late 1990s.

But the Super Bowl is still nearly two weeks away, so here’s some other stuff to tide you over until then:

• This Willie Stargell T-shirt takes you back to the late 1970s and the “We Are Family” Pirates.

• Here’s a 1984 Minnesota Twins apron promoting Schweiger hot dogs. The player’s wearing No. 84 (presumably because the item was produced in 1984) and Brooks cleats.

• We have some reader submissions this week. Zac Neubauer sent in this late-1980s/early-1990s MLB water bottle, with era-appropriate logos. And Michael Clary sent in some bobbleheads, including this Bills bobble with a curious helmet sticker and one from the ill-fated Seattle Pilots.

• Great selection of 1960s/1970s NFL books. If you’ve never seen/read these, take a look at this auction. Totally worth it!

• And finally, one for my vanquished 49ers: The auction listing says this “Sourdough Sam” Niners stadium blanket is from the 1970s, although I’m not so sure about that — note the NFL shield design.

Seen something on eBay or Etsy that you think would make good Collector’s Corner fodder? Send your submissions here.

That black NHL mug is from the early 90s, not the 70s or 80s. It includes the Ottawa Senators crest as well as the 1992 iteration of the Hartford Whalers logo.

…not to mention a Lightning logo and the 1992 updated Jets logo.

…and the Stars (not North Stars) logo, updated Pens logo, and inclusion of the already mentioned Sens, Lightning, plus the Panthers and Ducks. Based on the fact that there’s still a Nordiques logo, this is from 1993-1994.

The lack of “DALLAS” on the Stars logo is actually more of an indicator of being circa 1993-94, since the Avs logo wouldn’t have shown up on league merch until the summer of 1995 (at which point the Isles and Caps would have new logos as well).

I have that MLB water bottle too!

Look at the facemask on the helmet on that 49ers blanket. Definitely not from the 70s. I got a very similar Steelers blanket in the mid 90s.

Correct! Lots of teams use their “retro” or “throwback” logos on stuff. That doen’t make it vintage.

What, no sneaky unannounced bonus evening content on Day One of the great new experiment? What kind of half-assed media empire are you running here, Lukas?

Kidding! I’m liking the experiment more than I expected, though I still think it makes a jillion times more sense to lead with the ticker, then follow with main feature in the mid-morning and any extras in the midday/afternoon.

It’s grudgery to me.

I’m fairly sure the Dodgers didn’t wear red numbers until 1952. If they are throwing back to (say) 1947, then the look is legitimate, and the number on the front is just a basketball element.