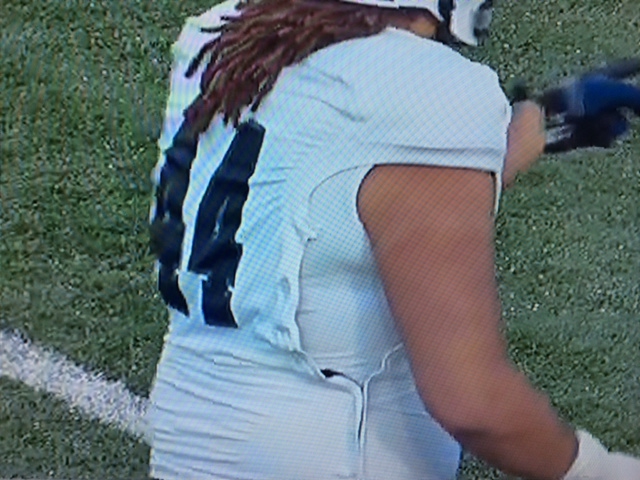 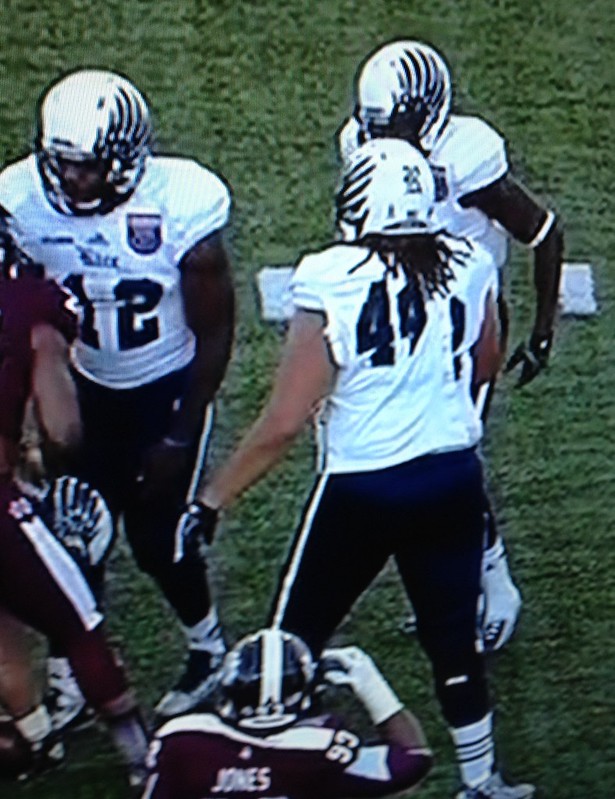 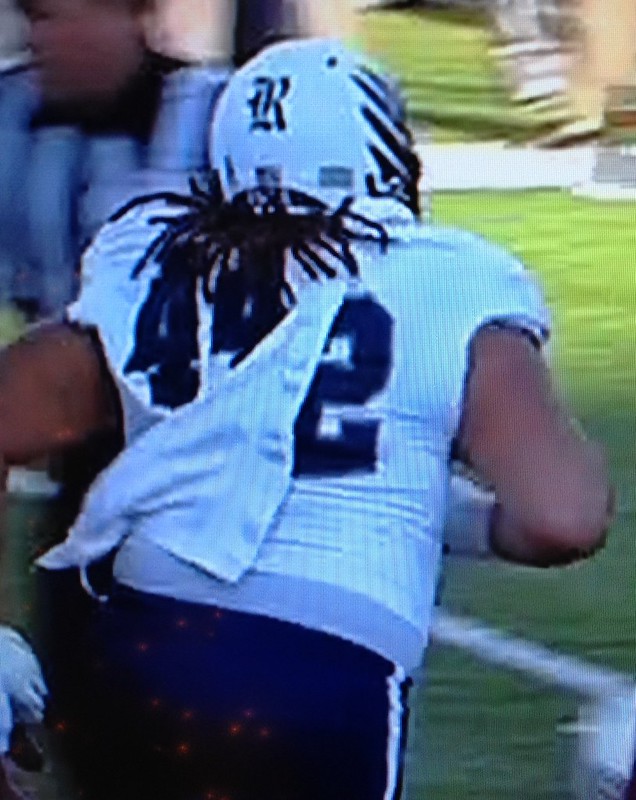 This is interesting: Rice offensive lineman Ian Gray normally wears No. 72, but they sometimes like to bring him as a tight end. In the NFL, he would simply report to the officials and they would announce, “No. 72 is eligible on this play.” But apparently college rules don’t allow for that (can someone fill me in on the specifics?), because Gray donned a side-zippered — or maybe size-Velcro’d? — cover-up jersey with an eligible number when he lined up as a tight end. I’ve seen this done for players wanting to avoid a duplicate-number situation on special teams, not for a tackle-eligible play. Anyway, as you can see above, Gray’s cover-up jersey came undone during one of his plays during yesterday’s Auto Parts Bowl.

As you can also see, Rice had a new helmet for that game. I’ll have more info on that, and on all of yesterday’s uni news, tomorrow.

(Special thanks to Don Schafer and Chris Perrenot for the screen shots.)

Uni Watch Exclusive!: The U.S. Army All-American Bowl — that’s a high school all-star game — will take place this Saturday, and here’s an exclusive first look at the uniforms. Whatever else you can say about them, it’s refreshing to see game with a military tie-in using uniforms that don’t feature camouflage.

Eligibility To Touch Legal Forward Pass
ARTICLE 3. a. Eligibility rules apply during a down when a legal forward pass
is thrown.
b. All Team B players are eligible to touch or catch a pass.
c. When the ball is snapped, the following Team A players are eligible:
1. Each lineman who is on the end of his scrimmage line and who is
wearing a number other than 50 through 79.
2. Each back wearing a number other than 50 through 79

There is also a recommend number system

Correct- numbers 50-79 are never eligible to catch a forward pass in college. No reporting or anything like that.

Additionally, the offense must have 5 linemen numbered 50-79. Almost always the center, 2 guards, and 2 tackles. So this is why he wears 72 in his normal alignment.

FWIW, you can’t “report as eligible” in high school football, either.

just got an update on twitter on deon hollins and 43 vs 8:

@hollins_deon: @willardkovacs he was on the Kickoff team & so was J.Ortiz & they both wear#8 so they gve Deon alternate43 so he cld be legal he’s still #8

Adidas has hired LMFAO to design their football costumes.

Seriously. It’s usually the non-FBS schools copying the big schools or getting the brand new stuff three years late. I think the wings are only from the old Oregon shoulder design- very sloppy seconds/JV indeed.

Why does a high school all-star game need a military tie-in in the first place? It all seems a little strange to be honest. Since when has Uni Watch been so enthusiastic about an exclusive, let alone one for just another tacky piece of dayglo wank for a game that few people will care about, which nonetheless seems to be little more than a propaganda rally for the U.S. Army anyway?

It’s an peculiar tie-in. Every player in that game has a free ride to a university and will likely not be joining the military (unless a service academy gets one of those kids). I am not sure who watches that game but it’s almost as if they want kids who aren’t in the game to say “welp, I’m not good enough to play football anymore, might as well go enlist”

My GUESS is it’s far less about where the individual players are going to college and more about marketing the Army. For years now, the various branches of the armed services have sponsored race cars and advertised heavily in an attempt to encourage enlistment.

I would think, yes, Dan, that they hope that one of the demos that would watch such a game would be those about to leave high school who may not have college in their plans post-graduation. I would guess that’s a sweet spot in terms of recruiting for them. And they can put on the whole game and everything surrounding it out of their marketing budget

How about the Michigan quarterback wearing Tom Harmon’s #98 this season? Who has to approve that?

Just realized you meant in relation to actually playing at that position… but, really, 50-79 are the only numbers that are restricted to position in the NCAA. The rest are, as indicated, just “recommended” – in other words, guidelines or suggestions.

Having spent 4 years in college working in the football equipment room I can tell you we had one player on the o-line who would have to change jerseys depending on the situation. Having been assigned to work with the Oline I was in charge of keeping the “other” jersey. I wish they would institute the same rule as the NFL. Same with High School, we had a kid who played defense and sometimes offense… we actually had a velcro jersey similar to the Rice thing here.

Yep, back when I was in high school, I managed the football team and our center was our kicker. He had a pull over jersey that he had to wear to kick. I was in charge of the jersey and his kicking shoe.

Great bench jackets on the coaches in the Winter Classic.

yes, very nice. tho I wonder- how much longer will Reebok be in the NHL? they have no presence anywhere else.

Well, I still don’t like the Red Wings’ use of “antique white” trim in contrast to the Maple Leafs’ normal white trim… but it’s not as horrible in-game as I feared. (Maybe it’s the near-blizzard conditions.)

In any case, it’s still nice to see color vs. color here.

I can see Detroit using the off-white color; it goes well with red and is good for a one-off.

Clearly, these four schools know NOTHING about how a team should dress for a bowl game.

Some of the Leafs are wearing eye black, some with wacky designs (bryce harper aka Road Warriors look).

I’ve been out of the loop for a while. Are they wearing throwbacks or fauxbacks in the Winter Classic?

Love the toboggan being worn by the Leafs’ Jonathan Bernier, the eye black, the coaches jackets, the brown goalie pads gloves and blockers. What a great looking game!

Toboggan? A toboggan is a wooden sled. It’s a little hard to wear a toboggan.

Toque is the word you may be searching for.

While running on the treadmill today, resolution started last week, I was watching the Gator Bowl. Nebraska’s helmets are a thing of simple beauty that made Georgia’s look incredibly busy!

The collar and new number font for Georgia is AWFUL!

I’m trying to like the Wings look in this game, but either pick CREAM or WHITE.

Not white socks, white color, and cream everything else.

And, like Paul said earlier in the week – let the logo speak for itself.

Anyone else catch Doc Emerick’s shoutout to Farkas Eye Black during the Winter Classic broadcast?

re: Anthem at Rose Bowl.

Way to stretch your time on camera, ladies.
Heaven forbid it should be about the song, not the singers.

All the more reason to stop singing it before every damn sporting event.

I respect this view. Never considered that angle before.

Random fact: The Jaguars have had four different primary away uniforms in the last 11 seasons (’03 through ’13) – five if you count the 2009-11 and 2012 jerseys as separate, as they changed the striping prior to 2012. Also four different home uniforms from ’08 through ’13, but this is debatable because the ’12 black uniform may have been an alternate.

Random fact #2: The 2009 uniforms lasted only four years, in “violation” of the NFL’s five-year rule.

I learn something everyday! I did not know the difference

Good for them… no one else wears that combo in the NBA, so why not? I wonder if they mean gold like the Wizards old alternate jerseys, or “gold” as in yellow.

Should we start (entirely spurious) runours about them moving to Pittsburgh?

My 13yo kid caught Ty Montgomery wearing an Oakley visor with Nike stickers. You can tell the stickers arent rounded to match the curve of the tab. He is certainly a future Uniwatch poster…