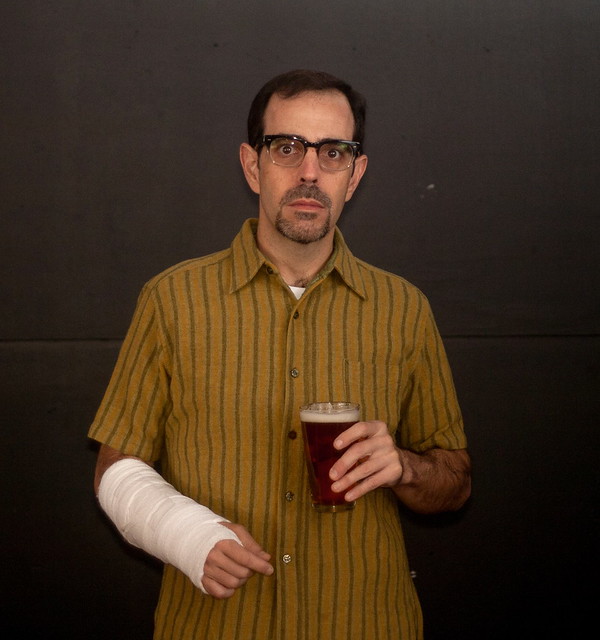 If there’s one thing my broken arm has provided, it’s a healthy dose of perspective. And what is perspective, really, but a way of being thankful — thankful that things didn’t turn out even worse.

So even though I’m dealing with an awkward, frustrating situation, I’m thankful that I broke my non-dominant arm, so my dominant hand is still free to do important stuff (see above). I’m thankful that the accident involved no blood or scrapes or anything like that — just the two broken bones. I’m thankful that I don’t have to commute to a job every day, which would be tricky. I’m thankful that I lost the ability to type for only a few days. I’m thankful that my ESPN bosses have been incredibly patient and supportive, basically telling me, “Take as much time as you need to get better — no pressure.” I’m thankful for having so many wonderful friends who’ve brought me food, done my dishes, moved my car, helped me shop for heavy items like cat litter, and more. I’m thankful that just about everything I need, including my orthopedist and my hospital, is within walking distance of where I live. I’m thankful for having reasonably good health insurance that will cover a good chunk of my medical expenses, and enough savings to cover the rest. I’m thankful that the weather hasn’t been too cold since the accident, so I haven’t to worry about bundling up in all sorts of layers while my arm’s in a sling. I’m thankful that, in an odd way, the accident has been good for my Mom, because it gives her a good reason to get all concerned about me and lets her be a Mom again, which is what she does best. Most of all, I’m thankful that my home, my pets, and my belongings were unharmed by the terrible hurricane that took place just two days before my accident. So many other people in my city weren’t as fortunate (some are still without heat and/or electricity), and what I’m going through is nothing compared to what they’re dealing with.

A few nights ago, I strapped my arm into its sling (I tend to use the sling when I’m out and about, because it sort of tells people to be careful around me, don’t bump into me, etc.) and went out to have drink with my friends Matt and Rebecca. At one point we looked across the room and noticed this girl sitting at the bar with a cast on her leg and pair of crutches propped up next to her. I’ve kinda gotten used to being the only cripple in the room over these past few weeks — who did this chick think she was?

I went over to her. She had three or four friends standing around her, but they stepped aside as I approached, realizing that she and I were about to have a broken-bones summit meeting. “Hey,” I said, “I’m kinda used to being the only cripple in the room.”

She laughed and said, “Yeah, me too.” We spent the next 15 minutes comparing stories and experiences. I thought her broken ankle sounded way worse than my broken arm (“At least I can still walk!”), but she saw it the other way around (“At least I can still open jars and chop vegetables!”). Once our conversation had run its course, we parted, each of us thankful not to be in the other’s shoes. 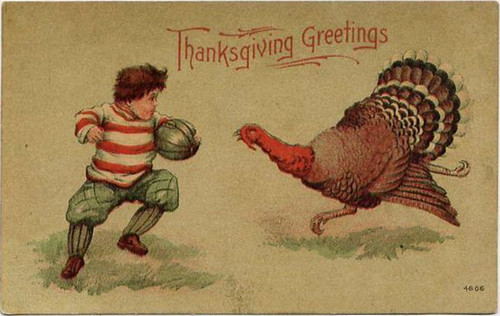 Thanks for sharing, Paul…and Happy Turkey Day, everybody.

I’d like to give thanks to Paul, Phil, and Ek. I’d also like to thank everybody who makes this such a terrific community. Enjoy the holiday (or, if you’re outside the States, enjoy Thursday).

Paul, do you ever get right-handed clowns saying things like “that’s too bad; if only it had been your left arm!”

Needless to say, I have some bad memories of a broken left wrist, which include not being able to do my job and earn money, the near-complete inability to write anything while taking several classes, and the indifference of professors who didn’t realize that it was my writing hand that was unusable. ^_^;

Paul, do you ever get right-handed clowns saying things like “that’s too bad; if only it had been your left arm!”

Nobody’s phrased it quite like that. But I’ve gotten “Oh, and it’s your right arm, that sucks” from people who don’t realize I’m left-handed. It’s tempting to accept the extra sympathy, but I always say, “No no no, I’m a lefty, so I’m actually quite lucky.” Which is true.

You got the exact opposite experience of what I had to live with!

Happy Thanksgiving,Paul. From one southpaw to another.

Happy Thanksgiving to everyone in the uni-verse !

“Once our conversation had run its course, we parted,… ”

No buying flowers from the late-night florists only to run back to the bar to find her gone?

No fleeting glimpses of each other in passing cabs?

No running back to each other in slow motion?

(yeah, that wouldn’t happened to me either)

Happy American Thanksgiving to all!

If you’re going to be with those you love, and who love you, take time to appreciate it.

It’s a real treasure. And a gift.

Among many other things, I am thankful for you/Paul/Phil/Ek/us on the UW site. I like to think of it as a gift that keeps giving, because it is nearly guaranteed that I learn and/or see something new every day.
Case in point: At the last UW gathering in Brooklyn, near the end, I was in a group conversation (Paul included) about the newly unveiled Astros uniforms. We lamented the diminished attention paid to the undergarments–that uniform really looks different over navy or orange sleeves. One thing led to another, and I inevitably mentioned David Wright’s orange piece of flair. Paul remarked that, thankfully, David Wright only has an orange neck line and never shows orange sleeves. Not even little short shirt sleeves poking out. After a few-second delay, I had to admit, “Wow, that little thought never registered before, but you’re absolutely right! So for all we know, he could be wearing a dickey!”
On that note, Happy Thanksgiving, everybody. And because I’m surprised it hasn’t been said yet, white meat is for suckers.
https://sphotos-a.xx.fbcdn.net/hphotos-ash4/308838_4110181557148_447096911_n.jpg

everyone have a great day!

Happy Thanksgiving to all at the UW.

Speaking of Woodstock and the Peanuts gang, thanks to ABC for not butchering last night’s showing of “A Charlie Brown Thanksgiving” the way they did with last month’s showing of “It’s the great Pumpkin, Charlie Brown.” Cutting out Schroeder’s playing a medley of WWI tunes, with Snoopy’s emotions running high and low was inexcusable.

Happy Thanksgiving to everyone! I hope you use this time to enjoy family and friends, and to stop and think just how many things in your life you can truly be thankful for.

Happy Thanksgiving Paul and all the UniWatchers!

Thanks for the story, Paul. Happy Thanksgiving to you and all you UniWatchers.

Happy thanksgiving to all.

As one of those quirky Canadians, I celebrated Thanksgiving last month, but I wish all my American friends a very Happy Thanksgiving, full of family, friends, food and football! (Which order you place them in terms of priority, is totally up to you!)

Glad you’re healing, Paul! I’m a southpaw, and I broke my left wrist a few years ago – one of the most aggravating experiences of my life! You never realize how much you take the ability to perform routine tasks for granted, until you suddenly can’t do them like you’re used to! Get well soon. Cheers!

Nicely done, Paul. Injuries can offer up a nice dose of perspective. I’ve relied on crutches six separate times in my life. It really emphasized things that I’d always taken for granted. Here’s to a speedy recovery for you and your neighbors in the northeast.

Man, I totally saw that story going a different direction! I figured at least an exchange of numbers or something! She must have had purple underwear on and your purple spidey senses were tingling!

PS: Add more butter. Because you need it. Don’t question it today!

Not sure if anyone reads/follows Craig Robinson & Flip Flop Fly Ball regularly, but he posted a new infographic yesterday regarding his choice for a new favorite team (read the story for why). At one point, he rules out the Marlins because of Loria, even though he’s “one of the very few people who genuinely likes” their unis. He also eliminates four other teams based on uniforms & logos–not including the Rockies, because he likes that “their uniform is horrible & purple.”

Happy Thanksgiving to Paul, Phil, Ek, ScottMX, the contributers, and my fellow commenters who make this site such a daily treasure!

Happy Thanksgiving from the GWN (still very G, as opposed to W though)and thanks for keeping this site so entertaining.

Paul, your broken arm, hit home litterally a couple of weeks ago, my 12 year old daughter, appeared at about 1:00 am at our bedroom door, crying. She had fallen out of bed, (a relatively high bed), a trip to the emergency ward, confirmed she had broken her humerus bone (just below the shoulder). And as you pointed out above, while my wife would obviously never want this on everyone, she is getting some joy at having to being more needed again by my daughter.

Happy Thanksgiving everyone. Now go eat some turkey and fall asleep on the couch while the Lions lose.

Hope I am not asking a dumb question, but what’s in the glass, Paul?

Have a great day, everyone.

Whoops, that’s from my messages. Try this, in case the first link gives you trouble.

Well stated, Paul! Happy Thanksgiving to everyone. And, excellent choice of a picture, Phil!

Yesterday, inspired by the story about high schools using pro and college logo’s, I went thru 13 states from the High School helmet site (IL, IN,LA,TX,NM, AL, OH, TN, NY,FL, CA, MN, MA) and pulled helmets that copy a few teams: Florida Seminoles, TB Buccaneers, NE Patriots, Falcons, Lions, Redskins, Titans, Seahawks, Raiders, and 49er’s.
Then I arranged them so you can enjoy the color variations used in the logos. Here’s the album:
(High level goofin’ around.)

What a great post, Paul. (And that picture is a keeper.) To you I say: Thanks.

Thankful for another WS title.

What’s on RGIII’s facemask bumper? Sorry I can’t remember the name for that little doo-hickey.

Happy Turkey Day to all.

the green pants are awful, true…but

Yeah, the pants are the most awful thing on the field right now…

Anyone watching Tex v TCU? Texas jerseys look awful, major difference in color between the fabrics used in the body and shoulder.

Yeah, saw that a bit ago and it was glaringly obvious. But hey, I’m sure they’re 0.0005 grams lighter. So there’s that.

So, did you get that lady’s number or what?