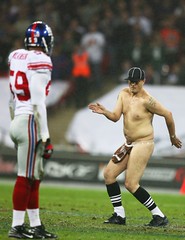 It’s good to see that all the finest aspects of pro football were on display yesterday in London, where the Giants and Dolphins sloshed around in the mud for three hours before adjourning for fish and chips.

But Mark Roberts (or, as the wire service captions identified him, “serial streaker Mark Roberts”) gave us plenty of Uni Watch fodder, even with his abbreviated attire. Consider: NFL officials wear socks with two white stripes, but college and high school zebras wear socks with Northwestern stripes — and that’s what Roberts was wearing. Note that his cap also lacked the NFL logo. So I’m assuming that he was disguised as a member of the chain gang (typically comprised of local college officials, although I’m not sure what would qualify as “local” in London), not as an actual on-field official. If I’m wrong about that — i.e., if he was posing as a game official — then the security staff really blew it by not picking up on his incorrect hose and headwear. Any Uni Watch reader would’ve noticed that in less time than it takes Sebastian Janikowski to run the 40-yard dash scarf down three hot dogs.

A few other notes from the game:

• I was mildly surprised that there was no special helmet decal for the occasion.

• Something really needs to be done about the increasing prominence of red in Big Blue’s color scheme. The latest incursion: Michael Strahan wore red shoelaces.

• Jints kicker Lawrence Tynes was wearing Umbro cleats yesterday — particularly interesting since Umbro’s diamond-shaped logo echoed the diamond logo used to promote the game itself. I’ll be curious to see if Tynes sticks with the Umbros next week or if it was just a one-game thing. Hey, Joe Skiba, care to fill us in on that?

• As I’d been told, the jersey patches worn for the game did not feature the Bridgestone logo (unlike the patch worn by that giant Jason Taylor robot last week). Instead, they included the word “London” in red type, although it was really hard to make out.

Unfortunately, a corporate advertising logo did appear on a uniform over the weekend — but not in London. It was in Newark, where the Devils played their first name in their new arena on Saturday night. It’s bad enough that corporations get to buy the naming rights for such facilities, but the corporate flimflammery on the jersey patch that the Devils wore for the occasion really scaled new heights in offensiveness. Let’s take a little inventory here: The name of an insurance company appears four times on the patch, and the company’s logo appears six times. And nobody affiliated with the Devils or the NHL had the integrity or the courage to say no to this? Shame on everyone involved.

Staph Infection Staff Addition: The search for Vince’s replacement continues (more on that in a sec), but meanwhile I’ve taken on a new assistant: Meet Nina Dubin, who’s generously offered to help me with administrative tasks, membership processing, and other clerical-ish stuff. Right now, for example, she’s checking the original membership orders against the roster page, so I can finally fill in the remaining 15 or so names that got wiped out by that software hiccup a few weeks back.

Nina hails from Atlanta (big Braves, Thrashers, and Falcons fan) but goes to school here in Brooklyn at Pratt Institute, where she’s studying advertising design. She reports that Pratt’s teams (which she says “mostly play against other art schools”) are called the Cannoneers, because there’s a big-ass cannon near the campus gates. The school’s mascot has variously been depicted like this and this, but I fully expect Nina to come up with a comprehensive redesign before she graduates. Please join me in welcoming her to the Uni Watch team.

As for Vince’s position, thanks again to everyone who expressed interest. I’ve now identified and contacted several finalists, so if you applied and haven’t heard back from me yet, I’m sorry to say you didn’t make the cut. But seriously, I was blown away by the quantity and quality of the applicants — wish I could work with all of you.

Uni Watch News Ticker: Nothing I’ve ever written has resulted in such amusing hate mail as last Thursday’s ESPN column about the Cowboys. About 30% of the respondents said I must be gay (bonus points for the guy who wrote, “Admit it, your boyfriend wrote this article for you, didn’t he?”), another 20% advised me to go into another line of work “since this writing thing obviously isn’t gonna work out,” and about 10% apiece informed me that I was (a) a douchebag, (b) a “BITCH!” (always in all-caps, always with an exclamation point), (c) simply jealous, (d) unfit to utter the words “Tom” and “Landry” in the same sentence, and (e) the biggest waste of space in ESPN history. My in-box hasn’t been this entertaining since I made fun of Ron Santo. ”¦ The swoosh is once again permitted on NFL fields — at least on gloves — and players wasted no time showcasing it yesterday. ”¦ It’s also making high school inroads. ”¦ It’s also showing up on glove palms now (as depressingly noted by Chris Andringa). … Remember how Reebok and the NHL had to scramble into damage-control mode last Thursday after the Boston Globe reported that the new jerseys would be scrapped? Here’s a press release that was issued from Reebok HQ on Friday afternoon, pretty much confirming what the NHL said. I feel a little bad for the league and Reebok here, because what the Globe reporter implied — i.e., that the new jerseys were being abandoned altogether — turned out to be inaccurate. On the other hand, it’s hard to feel too much sympathy for people who’ve so much to screw up a once-glorious sport. ”¦ Amazing find by Phil Johnson: This article about the 1918 influenza pandemic features this photo, which shows the batter wearing a surgical mask during the flu outbreak (and maybe the catcher and/or the ump too, although it’s tough to tell for sure). Also, note that the catcher appears to be wearing his cap with the brim forward and the ump has his truncated brim facing backward. ”¦ Looks like Primoz Brezec may have Velcro strips to keep his jersey tucked in, although it apparently didn’t work the other night (good spot by Alex Chiu). ”¦ Jeremy Brahm reports that Phiten — the company that makes those annoying titanium necklaces — is now in the uniform biz, thanks to “a patented technology developed in Japan, which allows the embedding of Aqua-Titanium” into clothing. ”¦ Reprinted from Friday’s comments: Someone has created an incredible design gallery based on those little gumball machine football helmets. ”¦ Good Blackhawks sweater gallery, plus a link to the team’s all-time roster as broken down by uni number, here (with thanks to David Soline). ”¦ The Altoona Curve have unveiled a gorgeous throwback design to celebrate their 10th anniversary. It’ll be worn for Sunday home games next year. Details here. ”¦ Very good article here about a new football helmet concept, with an interactive sidebar here. ”¦ And in a related item, studies indicating that the Riddell Revolution can decrease concussions have been called into question. ”¦ Bizarre side piping — or is it simply scales? — being worn by Barlow High School in Portland, Oregon (as spotted by Travis Demers). ”¦ Looks like McAlester High in Oklahoma is outfitting its football team with soccer socks (nice spot by Kenny Adkins). ”¦ Let’s hope this never happens again. ”¦ Latest sign that Kim Jong-il is a total crackpot: Jeremy Brahm was watching an Olympic qualifying soccer match between Iraq and North Korea the other night and noticed that the North Koreans had inconsistent typography on their front uni numbers and NOBs (compare this to this). ”¦ Corey Paske notes that the logo creep at UGA extends to the team’s mascot. ”¦ Spectacularly detail-attentive catch by Justin Kadis, who noticed that South Carolina DE Eric Norwood’s nameplate was not sewn down properly on Saturday night. ”¦ “Todd Helton went through two pairs of his Mizuno-ized Nike’s in Game 3 of the World Series,” writes footwear studies guru Mark Mihalik. “He started off the game in his molded Clippers, then shifted to a metal pair later in the game.” ”¦ “Best cheerleader outfits ever,” says Dave Soline, and I’m inclined to agree. ”¦ Speaking of cheerleaders, several NFL cheer squads wore Halloween costumes yesterday. … According to this article, Edmonton Oilers president Cal Nichols doesn’t like the team’s new uniforms (with thanks to Colin MacIntyre). ”¦ Score one for the fores of advertising in public spaces. ”¦ Last month I interviewed pocket schedule collector Claude Jacques. He’s now provided some photos from a recent skedder convention (that’s Claude in the foreground). “I wanted you to see just how much stuff there is to go through,” he says. “And this is with 15 people showing up. Imagine the Harrisburg show, when 40 to 50 skedders get together!” Quite the raucous caucus, no doubt. ”¦ The Bears broke out their orange alts yesterday. … UNC DE Hilee Taylor’s jersey tore in an unusual spot on Saturday (with thanks to Zach Smith). … “My beloved Wake Forest Demon Deacons have white goalposts in their home stadium,” writes A.J. Spring. “I haven’t been able to find any other major college football stadium that doesn’t have yellow goalposts.” Anyone know of any others? … Haven’t been able to find a rear-view photo of Ladainian Tomlinson from yesterday. Anyone know if his flag decal was still MIA? … Many, many readers have pointed out that Jonathan Papelbon’s been wearing a gray-underbilled cap (and is also a raving lunatic). Coupla thoughts: (1) He’s been wearing it all year. (2) Although we’ve been equating gray underbills with last year’s wool caps, it ain’t necessarily so. Back when all the underbills were gray, there were a few players who preferred to wear black (Orel Hersheiser, e.g., had New Era make black-underbilled caps for him throughout his career). So it’s possible that Papelbon simply prefers gray and is having special gray-trimmed polyester models made for him.